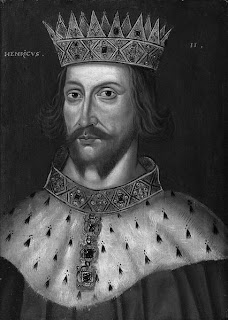 King Henry II: Today, especially among Church circles, Henry II has a pretty bad reputation because of the Becket affair and that is certainly legitimate. However, I cannot have a low opinion of Henry II. He made his mistakes, sure, with most pointing to the fate of poor Becket and his invasion of Ireland. However, his Irish invasion came at local request (bad move there) and as for Becket, he didn’t actually order the murder and he did some considerable penance afterwards, something which it is impossible to imagine any modern national leader lowering themselves to do. Taken as a whole though, he was an extremely successful monarch who forged an Angevin empire that made England the most powerful country in Western Europe at the time. During the height of his reign all of England, Wales, Scotland, Ireland and western France (if not more) were either directly or indirectly under his control. No small achievement that.

King Richard I: Richard the Lionhearted is one of those traditional heroes it is popular to downplay these days. Yes, he spoke French almost exclusively, yes he spent most of his reign outside of England, but the popular image of Richard I is just too good to pass up. I cling to that image because it is so compelling and have no time for the naysayers, even if they have some facts on their side (pesky, annoying things). As a crusader, he didn’t manage to retake Jerusalem but considering the odds against him, Richard did very well and the mutual respect he and Saladin had for each other may have become legendary but it is backed up by actual history. His main failing was in being too kind and indulgent with his brother John, but it is hard to fault him too much for that. Riding into the thick of the fight, swinging his Danish battle axe it is easy to see why he became such an iconic, chivalrous figure. He did regain some of the Holy Land for Christendom, undid much of the damage that was done in his absence and died in battle, again, a great way for such a famous warrior-king to go. I cannot dislike Richard I, I’m all for him.

King John: England has been fortunate in having mostly good to great monarchs but, every now and then, just to keep the English humble, a King John comes along. Despite my best efforts over the years to find a bright side, he really was pretty much as bad as his reputation attests. He betrayed his own family, conspired with the King of France, failed at doing wrong as much as doing right (if he ever tried), brought down excommunication on himself from Pope Innocent III (who was not the tolerant sort) and ended up turning the nobility of England against him. Failing again, as usual, he was forced to sign the Magna Carta so even for fans of the “Great Charter” King John cannot be given much credit for it since it was done basically under duress. He was not bad at administration but even there his tendency to micromanage won him few friends. By the time all was said and done no one respected him and worse no one could trust him. I have to go with the crowd on this one; King John was just not good.

Posted by MadMonarchist at 12:06 AM