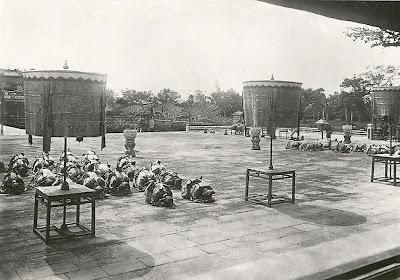 The “Great Sage” Confucius was of the opinion that mind and body were closely united and that our actions can influence our state of mind. Because of that, Confucian ceremonies often included physical acts meant to reinforce the proper state of mind and one of the most recognizable was kowtowing. It is a shame that today the term “kowtow” has been dumbed-down to be synonymous with groveling submission. In fact, it was a sign of the deepest respect and devotion towards a superior. The formal, Chinese kowtow consisted of three kneelings and nine prostrations and would be performed on solemn occasions such as at the enthronement of a new emperor. However, people also kowtowed before anyone exercising imperial authority on behalf of the Emperor, before family elders and in numerous instances in a religious context. Slightly different styles of the kowtow were once common across East Asia and even much further west. Even in the Bible, the Old Testament includes accounts of the Israelites ‘bowing’ their ‘head to the ground’ before the King who was, it is worth noting, referred to as the “son of God”.

Today, sadly in my view, kowtowing has almost completely been done away with. Something similar is still done in Thailand on certain occasions but, not surprisingly, in China the tradition mostly ended with the fall of the Qing Dynasty. Republican officials would still don traditional robes and kowtow to the former Emperor in a private capacity but it was the exception rather than the rule in Manchukuo where the standing bow became standard procedure. Today, for formal occasions in China (both on Taiwan and the mainland) the standing bow is most common. Kowtowing continued for much longer in Vietnam (French Indochina at the time) where there was still a monarchy but it came under criticism from certain western-minded scholars. In 1932, when Emperor Bao Dai returned to Vietnam from France, one of his first acts was to abolish kowtowing in almost all instances. It was a huge change in court ceremony but was, not surprisingly, welcomed by the newly established representative assembly who disliked such displays of loyalty to the monarch when they claimed legitimacy from popularity rather than divine investiture.

On this subject (as with many), I am in agreement with Confucius. Outward signs of respect encourage a more truly respectful attitude just as treating someone in a less respectful way will invariably lead to decline in how that person or the office they hold is viewed. This was not solely an eastern concept to be sure and it is why people in England used to drop to one knee in the presence of their sovereign or why Catholics used to kiss the toe of the Pope’s shoe. Today, in most monarchies, signs of respect have been reduced to a glorified nod of the head and even this, just like kowtowing, is denounced by some people as “humiliating”. Well, call me crazy (the verdict is in on that one) but I never thought a little humility was a bad thing. Being humble used to be a virtue and is certainly preferable over arrogance. After all, we may not kowtow to leaders anymore, but they have far more power over our lives than the monarchs of yesterday. Which do you think is more important to them? 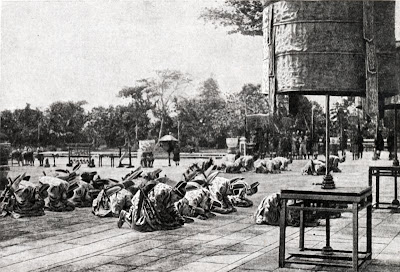 Enthronement scene from the film "The Last Emperor" 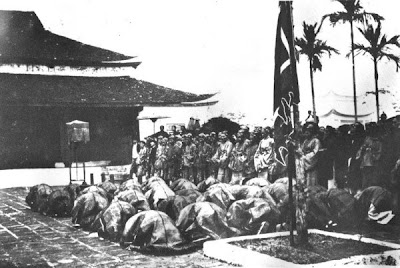 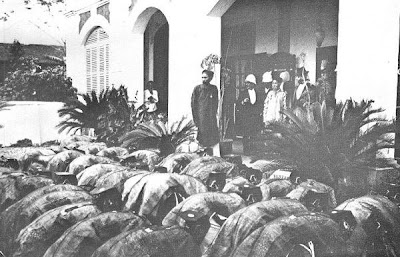 Vietnamese mandarins kowtowing before the Governor-General of Tonkin