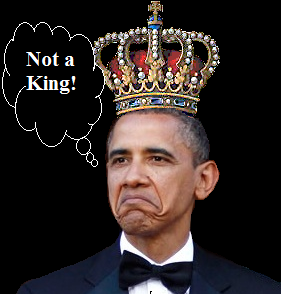 In a recent interview with Univision U.S. President Obama (again) informed the public that America is not a monarchy and that he is not a king. You'd think the oldest major republic in the world would not have to be constantly reminded of that fact. In this case it was the President making excuses for failing to deliver on a campaign promise to "reform immigration" during his first year in office (Univision is the main Spanish-language American media outlet). Again, he equated monarchy with tyranny but the excuse doesn't hold water Mr. President. In your first year in office your party had control of the entire government; the House, the Senate and the Presidency so, king or not, you could do pretty much whatever you pleased. In fact, in such a position, the President actually had far, far more power than all but a handful of the actual monarchs left in the world. However, if there is one thing the Republicans seem to agree with President Obama on (and it may be the only thing at this point) it is that monarchy is bad. Senator Rick Santorum (again) criticized Obama by comparing him to King George III (a terrible insult to the late king), Mitt Romney has done the same (poor King George) and Ron Paul never passes up an opportunity to pour scorn on the late Shah of Iran (while acting like the current regime is a bunch of innocent victims). So, perhaps we can at least take some small comfort in the fact that both major parties in the U.S. in spite of all the time that has passed since 1776 are still haunted by memories of monarchy. If this lot is so against it, it's bound to be a good thing right?
Posted by MadMonarchist at 5:29 PM