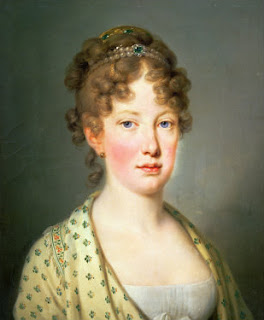 The legacy of Maria Leopoldina of Austria, the first Empress consort of Brazil, is still seen in South America on a daily basis. It was thanks to her that the basic color scheme of the Brazilian flag, green and yellow, was chosen to illustrate the marriage of the Houses of Braganza and Hapsburg. She was born Maria Leopoldina Josefa Carolina in Vienna on January 22, 1797 to the Holy Roman Emperor Francis II and his second wife Maria Teresa of the Two Sicilies. Like any good Hapsburg princess she was given the best education and a very refined and polished upbringing. She spoke six languages fluently and had a great interest in the natural sciences. In 1817 she sailed to Brazil to marry Dom Pedro of Alcântara, heir to the throne of Portugal after breaking off a previous engagement to a Saxon prince. It was an arranged marriage and would not have required such a long journey were it not for the fact that the French armies of Napoleon had conquered Portugal and forced the Royal Family to relocate to their chief colony of Brazil. However, Maria Leopoldina took the trip well, her interest in the natural sciences making Brazil attractive to her and, in fact, she took along a number of biologists and other scientists with her. She was the brainy type, very intellectual and scorning physical beauty as useless vanity. 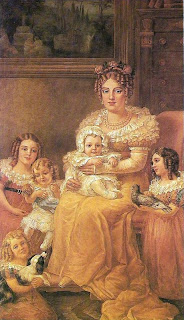 Dom Pedro had plenty of distraction with the beauties of Brazil (they were around back then too) and had never even seen his bride before. However, the marriage was a great coup for the Portuguese Royal Family since the Archduchess was not only a daughter of the venerable House of Hapsburg but also a sister of Napoleon’s second wife; which was helpful in keeping all bases covered. Arriving toward the end of the year, Dom Pedro had been titled Prince of Beira to have a loftier status when meeting his new wife. He was, evidently not terribly disappointed by the choice as it was very soon after the wedding that the happy news was announced that the new Princess was expecting. However, the drastic change in climate from Austria to Brazil had weakened Maria Leopoldina and, sadly, this first pregnancy ended in miscarriage. However, the new couple were nothing if not persistent and in 1819 their first child, Princess Maria da Gloria of Braganza (future Queen Maria II of Portugal) was born. Two years later the succession was finally secured with the birth of a male heir, Prince Joao, on March 6, 1821.

Not long after Leopoldina’s father-in-law, King Joao VI, returned to Portugal along with most of the royal family. Dom Pedro, however, remained in Brazil (a country he loved and had grown up in) to act as regent for his father. Dom Pedro was happy to stay behind (though the King was initially upset by it) but life was not so entirely happy for Princess Leopoldina. Her husband neglected her (probably an ancestress of Adriana Lima is to blame) and she was extremely worried about the political situation and the future of her family, both in Europe and her own children. Her anguish increased with the death of Prince Joao in 1822 and even the birth of another daughter could not fully lift the spirits of the mourning parents. Dom Pedro was beginning to worry about his brother Dom Miguel replacing him and a son of his own was sorely needed. Unfortunately, when Princess Leopoldina next gave birth in 1823 it was to a third girl, Princess Paula Mariana. 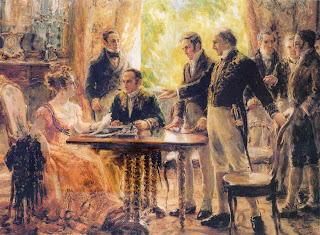 By that time, other political matters had reached a pivotal point as in 1822 Dom Pedro staged something of an in-house royal coup to break Brazil away from Portugal but keep the country under the Braganza Crown. An independence movement had been growing for some time and Dom Pedro was determined to get in front of it even if it meant trouble with Portugal, though naturally the hope was to avoid that. Princess Leopoldina supported her husband in these efforts and alongside him she became the first Empress consort of Brazil on October 12, 1822 once the independence of the Empire of Brazil had been declared. She had been acting as regent when Dom Pedro was away in São Paulo (as no one doubted her education and intelligence) and she famously sent word to him that, “The fruit is ready, it’s time to harvest” when the moment to seize independence came. However, life continued to be rather unhappy for the new Empress. The Emperor was constantly distracted but still hoped for a male heir and so could not completely neglect his wife. Yet, in 1824 the result was another daughter; Princess Francisca Carolina.

The Emperor might have begun to blame his wife for his lack of a son and soon he paid her very little attention at all and the Empress became deeply depressed. Her letters home caused outrage and anger from her father, Austrian Emperor Francis I, in Vienna. Yet, one year later, at long last, Empress Leopoldina gave birth to a son; Prince Pedro Alcantara of Braganza in 1825. She was delighted by this but the years of constant pregnancy and childbirth, on top of an already frail disposition, caused her health to decline rapidly. In 1826, at the death of her father-in-law, her husband succeeded (briefly) to the Portuguese throne, making her simultaneously Empress of Brazil and Queen of Portugal. However, she died that same year in Rio de Janeiro on December 11, 1826 at the age of only 29. She had been a dutiful consort and it is almost tragic to read her tributes to the great natural beauty of Brazil when she first arrived, knowing how much sorrow her life was to entail there. Still, she was a great asset to the Brazilian monarchy as her charitable nature made her extremely popular with the common people and that popularity was great enough to give a lift to her husband and the monarchy as a whole. She was a dutiful Empress who did her best and deserved better than she received.
Posted by MadMonarchist at 12:33 AM