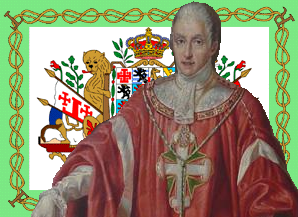 I - King Victor Amadeus III: The third King of Piedmont-Sardinia, Victor Amadeus III was my kind of guy; very conservative, very religious and very pro-military, which was generally the rule rather than the exception in the House of Savoy. He was an adherent of the old adage that, when change is not necessary it is necessary not to change. This meant that he was conservative where it mattered but open to reform areas that needed improvement. These included some bureaucratic changes and infrastructure improvements but his most famous reform was of the army which he did by following the example of the Prussian model; the most efficient and effective army of the day, particularly inspirational for leaders of small countries with small available forces. He even thought of attempting an alliance with Prussia to offset the danger posed by the recent Franco-Austrian alliance, however, when the French Revolution broke out he put all else aside and provided a safe haven to French royalists and refugees. Devotion to the monarchial principle compelled him to go to war with the French Republic even though the odds were clearly hopeless. He was also a good natured and generous man who was popular with his people.

II - King Charles Emmanuel IV: A favorite of mine mostly for his own qualities rather than any great accomplishments on his part, which was no fault of his own but due to the fact that he reigned at a time when Revolutionary France was on the rampage and all neighboring states had been occupied. He spent most of his reign in exile in Sardinia and Rome. He was a dutiful man who never gave up the struggle to return Savoy rule to Turin and he was also a very kind and religious man. He had an arranged marriage to a French princess who was mocked in her own country for being overweight and unattractive and she was never able to give the King any children, yet Charles Emmanuel IV loved her and her alone as long as she lived. He did so, not out of duty, not with any hint of sacrifice (indeed he had nothing but praise for his wife) but because they both shared the same deep, sincere faith. He saw the “inner beauty” of her devout soul and felt himself fortunate to have her. When she died he was absolutely distraught and decided to give himself entirely to the service of God, joining the Society of Jesus for the remainder of his years. In terms of character and spiritual devotion, Charles Emmanuel IV was a great man.

III - King Charles Felix: As someone who is proudly reactionary, I cannot help but admire King Charles Felix. He came to the throne in the midst of a revolutionary uprising during which a more liberal relative (future King Charles Albert) granted a constitution. Well, King Charles Felix was having none of that silliness. He returned to Turin, put a royal smack-down on the dissidents and did away with all of that constitution nonsense. King Charles Felix stands out, even among the Savoy, as an ardent and sincere believer in the sacred nature of monarchy. Memories of the French Revolution still lingered and he was determined to remove every last trace of the imposed revolutionary regime from Piedmont -and he was not kidding about that, he really meant every, single, last trace of it. My favorite illustration of this was the restoration of the aristocratic posts at court. When this resulted in “pageboys” including a number of middle-aged men among the usual early teenagers it made no difference to Charles Felix. Everyone entitled to a place would have it back! He was also a patron of the arts, music and theatre and sent a punitive expedition to Tunisia in 1825, strengthening the future Italian claim to the area.

IV - King Umberto I: Although he was a far from perfect man, King Umberto I took a number of actions that earns him high marks with me. He was a very monarchist monarch, joining in the Triple Alliance with Germany and Italy’s traditional enemy of Austria because of efforts by the French republic to export their kingless form of government to Italy. The French seizure of Tunisia also infuriated the court in Rome. Although more realistic than his father, Umberto I nonetheless had high aspirations for the Kingdom of Italy and supported the policies of his Prime Minister, Francesco Crispi, which saw the establishment of the first Italian colony in East Africa in Eritrea. Hopes for further expansion were dashed by the defeat at Adowa but King Umberto responded well, defending his unjustly maligned general and secretly using his own funds to pay the victorious Africans the money they demanded and to release their Italian prisoners. He had no compunction about swatting socialist revolutionaries and was generous and helpful toward his people. The fact that he was assassinated by a socialist revolutionary also makes me view him as something of a political martyr.

V - King Victor Emmanuel III: The most controversial of course, King Victor Emmanuel III was an imperfect man who certainly made mistakes, however, I have always had a soft spot for him. I detest people who make an issue of his size (as I do with those who do the same for Charles I of Britain and other ‘vertically challenged’ royals) and I detest those who ridicule his decisions without ever proposing alternatives or considering the consequences of those alternatives. Despite the sad ending, his reign accomplished many things his predecessors had long sought but never achieved; return of Italian-populated lands in the northeast, Italian dominance in East Africa, a foothold on the opposite shore of the Adriatic, restored friendship with the Church and greater strides in terms of national development. Circumstances aside, Italy reached her zenith of power under his reign with, for the first time in many, many centuries, Rome again becoming an imperial capital. He was also a good man, a devoted husband and was usually on the right side of issues even if few followed his advice when it mattered most. He usually did the right thing but suffered the consequences of often being a little late in doing so.
Posted by MadMonarchist at 12:14 AM