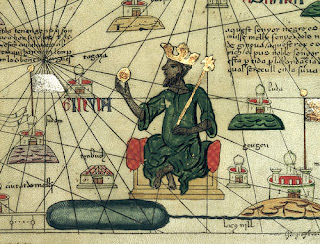 Musa I of Mali is not a widely known monarch today, even amongst those somewhat familiar with African history, but he was a giant figure in his own time, reputed by some to be the lavishly wealthy monarch in the world. He was born sometime around 1280, best we can tell, and was the tenth “King of Kings” of the Malian Empire, an African state that stretched across the modern Republic of Mali as well as much of the territory which had formerly belonged to the Empire of Ghana, another of the great African states that rose and fell long before the time of European colonization. His name is rendered differently in different historical texts, Mansa Musa being the most common. He came to power in 1312 as the King of Kings of Mali, Emir of Melle, Lord of the Mines of Wangara, Conqueror of Ghana, etc and etc. Today this region is mostly thought of in terms of poverty (and poverty and instability are certainly their largest problems) but all those many centuries ago things were quite different. The power of Rome had never penetrated the Sahara and remained concentrated along the coast, however, after the Muslim conquest of North Africa, caravans through the desert began to open up trade with sub-Saharan Africa and the cities that lay astride these trade routes became extremely wealthy, eventually growing to dominate the surrounding tribes to become powerful empires.

According to Arab historians, Musa I was the great-nephew of the founder of the Malian Empire; Mari Djata I (or Sundiata Keita). He served in the position of a ‘deputy-king’ to his predecessor who was lost while trying to find the furthest reaches of the Atlantic Ocean in a flotilla of small boats. Musa I had accompanied one such expedition but returned after the boats sank in a whirlpool at which point the Emperor determined to go himself, making Musa I regent in his absence. The Emperor never returned and Musa I finally took his place as ruler of Mali. Then as now Mali was an Islamic country but which also contained numerous animistic minorities. Emperor Musa I did his best to make his empire as purely Islamic as possible, both because he was personally devout in his faith and because he viewed the Muslim civilization, particularly that centered on the eastern Mediterranean, as the greatest and most advanced in the world and wished the same for his own people. This was important since, although Musa I was one of the most fabulously wealthy monarchs in the world, his realm was not as developed as one might expect. Nonetheless, he was undisputed as the most powerful figure in all of west Africa. 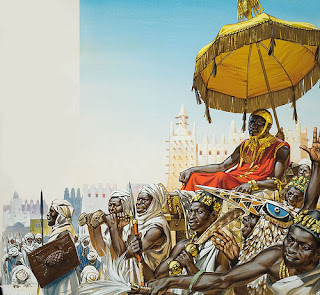 When the Emperor went on pilgrimage to Mecca it was an extremely grand affair, one of the most talked about events of his reign and symbolized to all his magnificence and the centrality of religion in his life. He set out with a retinue of 60,000 men, including 12,000 slaves and with various servants, guards, heralds with staffs made of gold and wearing the finest silks. There were hundreds of animals, some 80 camels being employed simply to carry the sacks of gold dust, ranging from 50 to 300 pounds each, with which the Emperor intended to express his generosity and the greatness of his empire to the cities he passed through on the way. He lavished gifts on the cities of Cairo, Medina and Mecca and brought along sufficient provision to build a new mosque for prayers every Friday of the journey. All along the route people were astounded by the lavish procession and word began to spread faster and faster which resulted in enormous price increases in cities along the way. Quite unintentionally the Emperor proved to be a one-man wrecking ball for the local economies and all items became far too expensive for ordinary people to buy because of the huge influx of gold he brought to the markets.

Inflation was out of control and to address the problem the Emperor had to buy up all the gold in the area, borrowing at extremely high interest rates, to try to reset the system. However, although the locals might have been upset by all this economic instability, back at home, even in his absence, the empire of Mali continued to expand and strengthen. While still on pilgrimage he learned that his forces had captured Gao, itself the seat of an old and formidable trading empire, and he diverted to the city to visit two sons of the Gao king who had been taken as hostages. The boys would later be educated at his court. During his epic pilgrimage Musa I also brought back to Mali numerous Arab scholars, engineers, architects and so on to develop and embellish his realm. It was during this time that many of the most famous mosques and madrasahs of Gao and Timbuktu were built including the Sankore Madrasah as well as the Hall of Audience which was attached to his royal palace. Visitors from around the world marveled at what was being established. The Italian scholar Sergio Domian remarked, “Thus was laid the foundation of an urban civilization. At the height of its power, Mali had at least 400 cities, and the interior of the Niger Delta was very densely populated”. 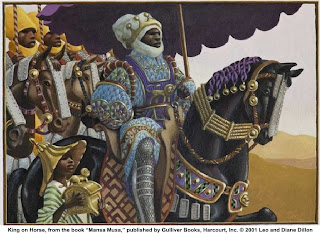 Even at the height of his power, wars with neighboring nations were common and as great as the promise might have been for the civilization Musa I hoped to build, it was not destined to last. The palace at Timbuktu has vanished without a trace as have most of the other monuments to the reign of Musa I, the largest madrasah and mosque being the only two structures remaining. It is not known how or exactly when Emperor Musa I met his end. Some sources say he died 1325, others that it had to have been after 1337. In any event, his reign had witnessed the peak of prestige and splendor for the Malian Empire. After he was gone there was a fairly rapid turnover in monarchs from his son to his brother to a nephew and so on, indicating that there were real and damaging power struggles within the ruling family. Doubtless these internal struggles enabled the deterioration of the empire itself, struggles encouraged by the temptation of the great wealth to be gained from the salt mines, gold mines and the slave trade. Dynasties came and went, most of them short-lived (according to the accounts of Arab historians which are the only sources available) until the empire finally collapsed around or after 1610 with lesser states absorbing the fragments. Had the foundations established by Emperor Musa I been preserved and developed, there is no telling what might have been accomplished and how the course of African history might have been radically different.
Posted by MadMonarchist at 12:16 AM