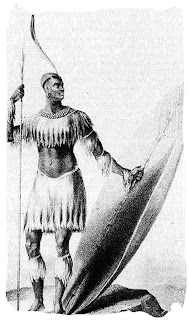 Probably no other Zulu monarch is as famous as King Shaka, and with good reason. Through his innovative military tactics and successful wars of conquest he made the Zulus the dominant power in southern Africa during his lifetime. Starting with a tribal nation of 1,500, King Shaka conquered an empire with a population of over 250,000 by the time of his death. Because of his actions, however controversial, Zulu power was maintained for fifty years after his death. Shaka was born in 1787, the firstborn but illegitimate son of Chief Senzangakhona and Nandi by a woman of lower social status. Because of the circumstances of his birth Shaka had a pretty rough life and this is sometimes cited as a possible reason for his harsh policies and ruthlessness later in life. His very name, Shaka, has been translated by some as an insulting term. However, it seems all of this had a profound impact on young Shaka and implanted in him a great ambition, a desire to surpass all others and, it must be said, a degree of insensitivity. Considering how he had been treated in his most vulnerable years it is not surprising that he would become rather insensitive to the suffering of others.

By the time he was in his mid-teens, Shaka joined the warrior corps of Chief Dingiswayo of the Mthethwa and was known for his personal bravery, warrior skill and intelligence. He honed these talents under the guidance of Chief Dingiswayo, becoming an ever better military leader and increasingly ambitious. When Shaka’s father died in 1816 Chief Dingiswayo sent him back to the Zulus to assume power. Shaka succeeded in making himself King of the Zulus and immediately took retribution on all those who had been cruel to him and his low-born mother during his childhood. Also, upon assuming power, King Shaka immediately instituted new and innovative military reforms based on his previous experience with the Mthethwa. He organized his warriors into a regimental system and replaced their light throwing spears with heavier thrusting spears and larger more effective shields made of animal hide. He also trained his warriors to use their shields as offensive weapons to pull aside the shields of their enemies to expose their bodies to a stabbing attack. These new tactics were to serve Shaka quite well in future conflicts.

One of the most important changes Shaka made was in the discipline and training of his warriors. Often harsh methods were used to instill total obedience in his men so that they would follow orders without question and function as an organized team rather than simply a mob of individual warriors. He raised the physical fitness, resilience and stamina of his men by forbidding sandals and training them to run barefoot over fifty miles a day, regardless of the terrain. Years after Shaka was dead, foreign observers would marvel at the absolutely incredible speed and stamina of the Zulu armies who could move faster and more effectively on foot than almost any other soldiers in the world. The Zulu king also made use of young boys to carry supplies and so gain first-hand experience at the art of war so that when they came of age they would be fully prepared to take their place as warriors. King Shaka also developed the famous “buffalo” formation for organized attacks. It should be remembered that this was almost unprecedented in Africa at the time when the wild charge was the standard, time-honored tactic for any battle. King Shaka established his own and very effective strategy and because of the discipline and training he instilled in his men he was able to carry it out. The King could stand off on a hillside to gain an overall view of the battlefield and military situation, controlling the battle via messengers, while his warriors advanced in four ranks. The first would meet the enemy head-on, with a second force in reserve while the third and fourth divisions would fan out (like the horns of a buffalo) to encircle the enemy, thus allowing them to be destroyed completely. He also made sure to keep his reserve force out of sight so they would not became panicked or, alternatively, become too aggressive and join the fight prematurely.

In the initial wars fought by King Shaka these innovative tactics were far more complex than anything the other tribes he confronted could deal with and they were defeated quickly. Once beaten Shaka had no qualms about massacring his enemies, however, he usually gave them the choice of joining his army and any who did so left behind their previous affiliations and became Zulus, accepted in every way as if they had been born to that nationality. They were then trained as the Zulus were and joined the ranks like anyone else. Because of this policy, within only his first year as King, Shaka increased the number of his warriors from 350 to 2,000; quite a respectable force for that time and place. He was soon put to a greater test in 1818 when he joined his old teacher Dingiswayo at the battle of Gqokli Hill, an extremely hard fought defensive battle in which Dingiswayo was killed and King Shaka himself was almost defeated. It was a hard-won victory though and Shaka was sobered enough by the experience that he went back to his previous ways of making war on smaller tribes and clans to increase the size of his army. However, less than a year later he avenged the death of his mentor by inflicting a crushing defeat on the Ndwandwe in a fierce battle at the Mhlatuzi fords which lasted two days. In another new strategy unseen in Africa till that time, King Shaka applied the “scorched earth policy” toward his enemies, totally devastating their territory so as to leave nothing upon which the survivors could sustain themselves.

For the next ten years King Shaka launched numerous wars on almost every neighboring tribal nation in southern Africa, earning a reputation as a frighteningly effective conqueror. His innovative tactics and, it must be said, brutal treatment of his enemies, made him the most powerful monarch in the entire region. At the height of his power King Shaka ruled over a Zulu empire that stretched from Tanzania to the Cape Colony. He gained a domain of about two million square miles and gained a “body count” of about two million dead enemies doing it. He became so powerful that when an English doctor was brought in to treat him after he was wounded in battle he proposed exchanging ambassadors with the British monarch. There would have been no harm in that but he also allowed in British trade and businessmen for which later generations of Zulus might be critical of him. However, at that time, given what he had accomplished, it is understandable that King Shaka might have felt a bit over-confident or even invulnerable. Ultimately, King Shaka was his own worst enemy and while no other power had managed to beat him on the field of battle, his own brutal leadership was to ensure his downfall.

King Shaka was a harsh sovereign and a very superstitious man who was known to have people put to death, in horrible ways, for the seemingly random crime of “smelling” like a witch. His arbitrary cruelty became much worse after the death of his beloved mother in 1827. No one felt safe from his random punishments which might range from the torture and execution of one person to the complete massacre of entire villages. The people began to live in fear of him and the army became more discontented as well as they were kept constantly at war, moving ever farther from their homes and families on behalf of a king who no longer joined them in battle. They also had a big problem with one of the rules King Shaka enforced on his warriors which was to totally abstain from sexual relations. With a frightened population and a frustrated army King Shaka could not hope to survive for long. Finally, on September 23, 1828 Shaka was assassinated by two of his half-brothers at the age of 41. They claimed that he died in a cowardly fashion, begging for his life but, of course, we have only the word of his murderers on that score. 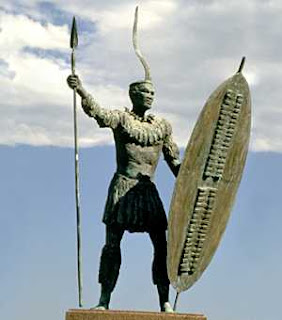 In any event, the place in history for King Shaka was secured long before the day of his death. He was certainly not a kind man but he is not celebrated or remembered for his actions as a ruler. What he is remembered for is his military leadership. Setting aside his character, he was undoubtedly a great warrior, perhaps the greatest and most successful conqueror sub-Saharan Africa has ever known. He took the Zulus from being a small, relatively minor local nation to become the dominant power in all of southern Africa. Even those who killed him knew better than to try to go back to the way things were and the system of organization, the tactics and the strategies he developed, served the Zulus well for many years to come before their final defeat at the hands of the British. Yet, even then, the greatest victory of the Zulus over the British at the battle of Isandlwana, would not have been possible without the earlier innovations and standards for military excellence set by King Shaka.
Posted by MadMonarchist at 12:10 AM