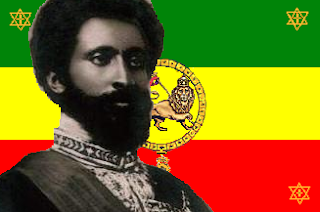 It was on this day in 1930 that Haile Selassie was crowned, "Elect of God, Conquering Lion of the Tribe of Judah and King of Kings of Ethiopia". His was one of the more troubled and eratic reigns of the 20th Century. He knew great hardship and also great admiration. For a time he was the most esteemed figure in a wave of anti-European nationalism that swept the continent of Africa as the colonial period came to an end and even in his own lifetime a new religion rose up that held him to be a living god. Yet, Haile Selassie was also one of the few monarchs to suffer the indignity of losing his throne twice, the last time to his own people and shortly thereafter losing his life as well. As Emperor, there was a time early on when Ethiopia commanded international sympathy, growing strength and even dreams of expanding to historic borders. He also knew war, defeat, exile and liberation followed by times of unrest, famine and hardship. It is safe to say that during his years on the throne Emperor Haile Selassie had seen it all, the extremes of good and bad alike. Probably no other African monarch of the 20th Century occupied such a pivotal position for world history.
Posted by MadMonarchist at 1:02 AM