Jamaica and the Monarchy

Monarchy first came to the island of Jamaica with the beginning of Spanish rule in 1509 during the reign of Queen Juana of Castile (our dear “Juana the Mad”). Spanish rule was further consolidated by her successor Emperor Charles V. Spanish ruled ended in 1655 with King Philip IV being the last Hapsburg to reign over the island. For a time it was the end of monarchy period as this was the period of the interregnum in Great Britain but royal rule returned with the restoration of King Charles II in 1660. However, it took still more time for government to take hold as Jamaica and much of the Caribbean had become a haven for pirates and/or privateers in the various wars between England, Holland, France and Spain. For a very long time Jamaica was one of the ‘crown jewels’ of the burgeoning British Empire. The most lucrative industry was the many sugarcane plantations on the island which produced great wealth for all involved from the plantation owners to the trade and shipping companies. The only people who did not benefit, of course, were the slaves who were imported, mostly from West Africa, to work the plantations. 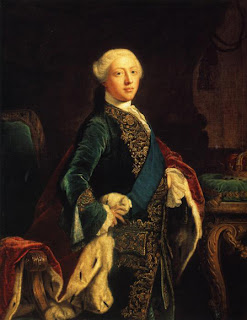 Slavery was taken as a simple fact of life during the Stuart and early Hanoverian periods but after numerous slave revolts and the growing advocacy of Christian abolitionist groups, thinking began to change and the monarchy was at the forefront. HM King George III was to be a crucial figure in the history of the British West Indies and the cause of monarchy in the Caribbean. He showed his solidarity with his subjects in the Caribbean in both his private life and in his public duties. It is not often remembered that King George III was so offended by the slave trade and the treatment of slaves on the sugar plantations (all of which was legal at the time) that he boycotted sugar to show his opposition to slavery. He was also adamant that the American Revolution had to be stridently opposed. It is easy to forget that the American Revolutionaries did not intend for their new republic to include the 13 colonies that later made up the United States alone. They expected their new republic to include all British territories in North America including the Canadas and the British West Indies. Even though the revolutionaries eventually secured the independence of the 13 colonies, by his zeal in supporting the war effort, King George III ensured that the loss was limited to those 13 colonies and their territorial claims while places like Canada and the West Indies remained under the Crown. It was also under King George III that the Slave Trade Act was passed in 1807 which abolished the slave trade in the British Empire.

It was during the reign of HM King William IV that slavery was finally abolished in Jamaica (and across the British Empire) in 1834 (decades before the United States did the same and that was after a civil war that cost hundreds of thousands of lives). With each new royal dynasty the island of Jamaica had achieved progress. British rule came with the Stuarts, the abolition of the slave trade and slavery came with the House of Hanover and independence was to come with the House of Windsor. It was under HM King George VI that Jamaica became a self-governing dominion within the British Empire in 1944. Jamaicans gave admirable service in both World Wars. In World War I, for example, troops from the British West Indies were sent to serve in the epic campaigns in Africa. The local Africans were very impressed with the discipline and professionalism of the Caribbean troops (known as the West India Regiment) having previously seen only White troops from Europe display such expertise. Because this was their experience they often referred to the Caribbean troops as “Black Europeans” because they carried themselves with the same pride and professionalism they were used to seeing only in European troops. 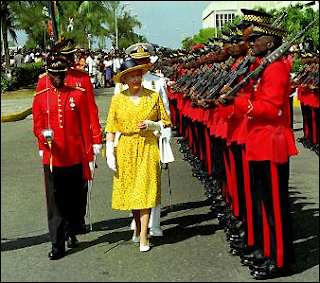 On August 6, 1962 Jamaica became a completely independent Commonwealth Realm under HM Queen Elizabeth II. The Queen has visited Jamaica six times during her reign and has toured almost every corner of the island, first in 1953, twice in 1966, in 1983, 1994 and 2002. Throughout the centuries under the British Crown and as an independent Commonwealth Realm, the island nation of Jamaica has known stability and consistent progress. The monarchy and the web of support it brings with it have allowed Jamaica to avoid the upheavals, hardship and foreign interventions experienced by many of her island neighbors. Today the monarchy remains popular with the Jamaican people but, as usual, there are those openly and deceptively pushing the republican agenda. One must wonder what such people are thinking. Would they prefer Jamaica to be more like the impoverished republic of Haiti or perhaps the Communist dictatorship of Cuba? With the Crown and the Jamaican monarchy the island has had security, independence, freedom and a proven system of government to respond to the needs of society. Thankfully, the loyal monarchists of Jamaica are organized and now taking advantage of social media to encourage the royalist cause and defend the Jamaican monarchy. For an example, see the Caribbean Monarchist League on Facebook.
Posted by MadMonarchist at 12:08 AM