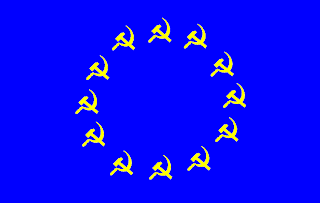 The downward spiral of the European Union continues. I don’t think any long-time readers will be surprised to know what a low opinion I have of the European Union. The farthest I will go is to say that some of the original founders may have had good intentions but the whole idea of Europe as one country frankly disgusts me. I know, there are those who say, and they have said to me, “but Archduke Otto favored European unity” so it must be pretty good right? I have the utmost respect for the late Archduke but, “European unity” is a pretty broad, vague thing to be in favor of and for all those who list off all the royals, aristocrats or even popes who, they say, favor a united Europe my only response is that guys like Adolf Hitler and Oswald Mosley favored a united Europe too. If one wants to argue that the “concept” is a good one, we can have that argument, but there is no doubt in my mind that what actually exists today in those hideous buildings in Brussels is absolutely something to oppose every step of the way. Anytime the EU finds itself falling on hard times I feel like standing up and cheering.

That being said, I cannot be completely upbeat about the current crisis in Europe because it is proving that your average European is just as dumb as your average American in that *they just don't get it*. Just like your majority, apathetic, mainstream Americans, your average Europe has not gotten the message: Socialism Doesn't Work! You cannot get something for nothing, you cannot run up debts and expect future generations to cover the bill (especially when you cannot be bothered to actually produce a future generation) and punishing success and rewarding failure is not the way to create a successful economy. These are not difficult concepts to grasp, yet precious few today seem able to. The austerity measures (such as they are) did not happen in Greece because people suddenly saw the error of their ways. They only happened because Greece ran out of money, couldn't pay back their debts, couldn't get anymore loans and so the Greek borrower became the slave of the EU lender. That is my biggest concern with the current crisis; that, as I see it now, no one seems to be learning from their mistakes but throw an infantile fit at the government gravy train being cut off and turning their anger on whatever unfortunate party or coalition just happens to be in power.

In Spain, for example, recent elections turned out the socialists and brought the 'very, very slightly right-of-center leaning' party to power. I was certainly glad to see the socialists go, it turned my stomach every time King Juan Carlos had to meet with that crowd, but while I don't want to ignore those people who voted them out for the right reasons, most did not. I don't think most Spaniards voted against the socialists because they realize they're wrong (on social as well as economic issues) but simply voted them out because they happened to be in power when the house of cards collapsed. In Italy it was the 'very, very slightly right-of-center' Berlusconi who was tossed out, again, not because of scandals or anything that concrete, but mostly because he happened to be the one in power at the time. He certainly did not create the current disaster that is the Italian economy all by himself since becoming prime minister in 2008. So there was some public outcry but, most importantly, the EU wanted him gone (they had never liked him much anyway). The EU has imposed new leadership on Greece, in Italy (surprise, surprise) the new PM Mario Monti is a long-time EU-supporter and one who actually did help Italy get to where she is now by helping arrange the massive loans to keep up the fools paradise illusion while the country was going broke.

The people though, so far, are not so upset with the EU establishing dictatorial power over the member states, not so upset with the policies that have driven them into bankruptcy and not so upset that the EU has had to go to China (perhaps making all of Europe the slave of the Chinese lender) for more bailout money. No, they are upset because they are being told that cannot continue to get all the freebies from the government they have grown acustomed to. As glad as I am to see the EU in crisis, that simple fact still depresses me.
Posted by MadMonarchist at 12:40 AM