The Late War in Viet Nam 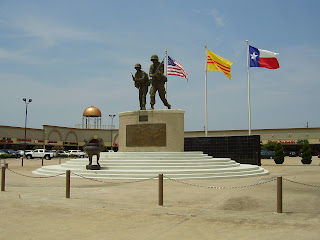 As this is Veterans Day (formerly Armistice Day) and having already discussed often my thoughts on World War I (a disaster all around) and being the glutton for punishment that I am, I thought I would take this opportunity to pass on a few words about a very controversial conflict: the Vietnam War. First of all, for the sake of honesty, let me say that I will probably have to plead guilty to the charge of being biased on this one. I had loved ones involved extensively in the Vietnam War, both American and Vietnamese. I know how bad it was, I know the toll it took on people and I know what Vietnam has been like since the American withdrawal and the Communist takeover. That last bit is the part I think is all too often ignored today. But, to stay on point, I am, to say the least, emotionally invested in the Vietnam War and it is impossible for me to look back at it as history without thinking about those I know and knew who were directly and dramatically affected by it. I have never picked up the habit of desiring popularity and therefore it troubles me not at all to say, even today, I support the late war in Vietnam. To be even more unpopular, I will say that I would have supported the French war in Vietnam and, personally, I think it would have been best if the United States had supported the French even more during their war in Indochina. As I see it, that was the really crucial time of the multi-decades long conflict between the communists and anti-communists in Southeast Asia. 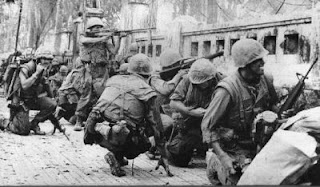 To be sure, there were many unsavory aspects of the colonial rule of the French republic in Indochina. However, during that time, every region (Laos, Cambodia and Vietnam) still had their traditional monarchs on the throne, at least in a ceremonial capacity -not ideal, but something to work with. I can also say that, based on what I have seen, Vietnam was much more “Vietnamese” before independence than after. I would have supported the French effort because they were fighting to win and, although the government of the State of Vietnam which they sponsored, was not ideal by any means, it was at least under the nominal rule of the last Emperor in the capacity of “Chief of State”. When the French threw in the towel (Eisenhower having refused to come to the rescue at Dien Bien Phu -big mistake) the communist regime in the north was effectively recognized as a legitimate government and that was a very, very big mistake. The deal that was made might have been the only thing the former Vietnamese Emperor and the United States ever totally agreed on -they were both opposed to it and refused to sign on. Both realized that it would be absurd to trust the fate of the country to a nation-wide plebiscite with more than half the population under communist control and not free to make their own choice at all. Additionally, even if they were not coerced, many would have likely voted for the communists anyway as the vast majority of their base of support were uneducated peasants who could not read, write or understand and had not the slightest conception of what communism was or would mean. 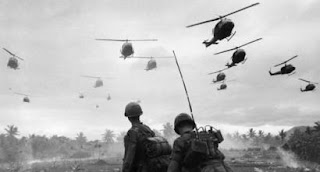 The United States, in my view, was doing the right thing in Vietnam even if they did it in the wrong way or, in some cases, for the wrong reasons. Getting rid of the ex-Emperor was a very bad move in my book, but the guy they replaced him with, Ngo Dinh Diem, was not all bad. Giving the ‘green light’ to get rid of Diem when he proved to be uncooperative was also a bad move in my book and it started a period of devastating political instability in Saigon that did not even start to be clamped down until the presidency of Nguyen Van Thieu, effectively the last President of South Vietnam. The U.S. did not fight the war properly in my view either. They were fighting, effectively, a defensive war with the only strategically offensive measures being reduced to the bombing campaign. I’m sorry, but you just cannot win a war that way. I believe it was the French Emperor Napoleon Bonaparte who said that, “The only logical end to defensive warfare is surrender”. Many people wonder how the war could have lasted so long when the U.S. won virtually every engagement. The simple answer is that because every time the communists were beaten they could retreat to their side of the border to re-arm, reorganize, re-equip and then come back to try again and again. That, under the best of circumstances, is not a recipe for victory but for a war without end. 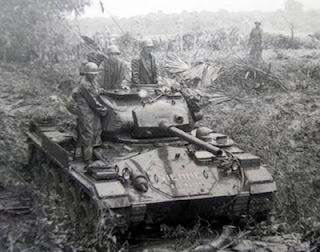 It is a simple rule of mine that, putting aside all the other political junk, any time anyone fights communists they have my full support, regardless of the circumstances. I think of where the line was held, such as South Korea, and compare that to countries where it was not, like Vietnam. Of course, South Korea has its problems, but it is a veritable paradise compared to the Socialist Republic of Vietnam. I also know that the Vietnamese, regardless of allegiance, were terrified whenever Korean troops came to town (yes, the U.S. was not the only one with troops on the ground). They were not ‘nice guys’. That is because the Koreans had first-hand experience with confronting communism. They knew what it was all about, it wasn’t just something they had read about in a book like most American draftees. The Koreans knew that when it came to the communists there was no room for half-way measures, you have to go “Old Testament” on them. It is a sad fact of human nature that many people will never understand the heat until they get burned by the fire. The self-obsessed, spoiled hippies prancing around America had no idea what communism really meant; they had never been burned by it. The Koreans had and it showed. 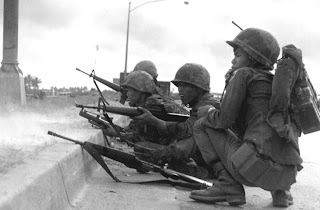 The real point today though is to remember the veterans and that I certainly do. They were misled at the highest level but the troops fought as hard as any in any war before or since. All too often we also forget that they were *victorious* in spite of having one hand tied behind their backs. In the dastardly Tet Offensive of 68 the communists hit every major installation in South Vietnam with all the strength they could muster and the U.S. and ARVN forces completely wiped them out. The Viet Cong was all but annihilated in that campaign and were never a significant force afterward. It was tough, I had one cousin who lost a leg from wounds he suffered while battling the communists in Hue for control of the Forbidden City. But, in the end, they held the line and repelled every attack. Furthermore, no matter what one thinks of “Tricky Dick” Nixon, his policy of “Vietnamization” worked. The heroic South Vietnamese armed forces rarely get any credit these days but the fact is that after the U.S. withdrawal the communists launched their biggest offensive of the war and, with only some U.S. advisors and air support, the South Vietnamese kicked their commie butts. It is so maddeningly frustrating that, believe it or not, by the early to mid 70’s the war was won. With only a little fire support and supplies (much less than the north was receiving from the Soviets) the ARVN forces had the south completely secure and it was at that moment that the Democrat-controlled Congress cut off all aid and assistance to South Vietnam, robbing them of everything as well as robbing the American veterans of all they had fought for in the previous ten years. The soldiers, U.S. and South Vietnamese, won, they did not lose that war -Washington DC politicians did.
Posted by MadMonarchist at 12:16 AM