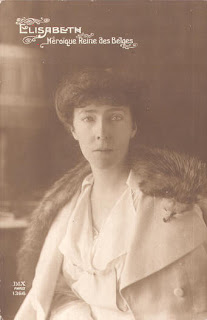 The saying that, ‘behind every great man is a great woman’ was never more true in this case. King Albert I of the Belgians was a great man in every way and the great woman behind him was Elisabeth of Bavaria. She was the greatest support to her husband and the backbone of the Belgian Royal Family in what would be the darkest hour of their history up to that time. She was born Elisabeth Gabriele Valerie Marie, Duchess in Bavaria, at Possenhofen Castle in Bavaria and was named after her aunt, the famous Empress of Austria. She grew up in Bavaria as a very well rounded young lady; intelligent, curious, loving art and music (passions she would retain throughout her life) at home outdoors and utterly fearless. She was small, refined, very delicate looking, lacking, perhaps, the dazzling beauty of her famous aunt but graceful, with refined features and a rather statuesque appearance. Her appearance and her love of painting, sculpting and music (encouraged by her father who was also the artistic type) would make some consider her fragile, but she could climb the rugged hills and mountains of the Bavarian Alps with the best of them and she did not shy away from unpleasant sights while serving in the eye-clinic established by her father Duke Karl Theodor who was a noted ophthalmologist. 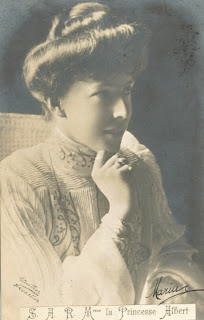 On October 2, 1900, in Munich, she married HRH Prince Albert of Belgium, then second in line to the throne after his father following the death of Prince Baudouin. The two would become one of the most perfectly wedded royal couples of their time. They were devoted to each other, anxious to be of service, devoutly religious and shared many interests. In 1905 Prince Albert’s father died and he was suddenly heir to the throne and Princess Elisabeth was set to become the next Queen of the Belgians. Her gracious manners, charm and petite figure were tailor-made to win over the public but the Bavarian princess was made of tough stuff. It would take some time for the world to realize that, but those around her learned right away. She carried herself in such a way as to command respect and even the formidable King Leopold II watched his language when in her presence. A disapproving glare was all Elisabeth required to make her feelings known and, in 1909 when her husband became King Albert I of the Belgians and she became Queen, she set a new moral tone for the Royal Family. No longer would the court be the focus of scandals, business deals and public relations battles. Queen Elisabeth made the court a center of charity, artistic appreciation and Catholic morality. 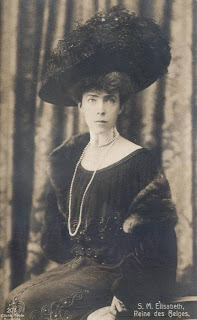 It was a happy period for the couple. Elisabeth loved Albert intensely and had from the very start. She was the most supportive, comforting and affectionate wife a King could ask for. Children had come quickly with the future King Leopold III born in 1901, Prince Charles Theodore born in 1903 and Princess Marie Jose born in 1906, destined to be the last Queen of Italy. She was a devoted and caring mother, doting especially on her eldest. This is seen, perhaps best, in the care she took for the education, secular and religious, for her children. They were a very close family and it was largely to the credit of the virtuous Queen Elisabeth that the reputation of the Belgian monarchy improved dramatically as people saw the little group as the ideal Royal Family. There is no such thing as perfection in this life, however, and soon their domestic bliss was shattered by the outbreak of World War I. The Imperial German Army, the most powerful military force in the world, was soon knocking at the door of “gallant little Belgium” and King Albert I famously refused their demand for passage through his kingdom. The Germans might conquer Belgium but they were going to have to fight for every last foot of ground of it. This was even more painful for the Queen as some of the men leading the Bavarian regiments of the German army were her own family. Yet, there was never the slightest question about where her loyalties rested. 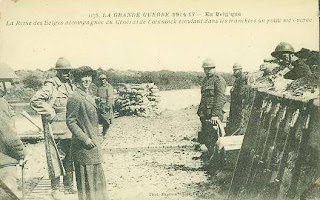 As per the constitution, King Albert was thrust into the role of field commander of the Belgian army and it was a colossal strain. Outmatched in every way, after the Germans brought up specialized, Austrian heavy artillery, the main Belgian forts were knocked out and the King made his stand at Antwerp. When that city could no longer be defended they carried out a fighting retreat down the coast before finally stopping the Germans at the Yser River, just inside the Belgian border on a tiny patch of waterlogged Flemish farmland. Queen Elisabeth supported her husband every step of the way and who can say what would have happened had she not been there to do so. Everyone did their part. The King managed the war effort, the young Crown Prince Leopold joined the infantry and went to the front and Queen Elisabeth began working as a nurse, a job well suited to her. She established a hospital to care for the wounded Belgian soldiers, worked there herself and was responsible for a great deal of the relief effort in caring for civilians and soldiers alike. Despite her intense sorrow at the horrors surrounding her, she remained strong, confident and optimistic. Generals down to common soldiers praised her for her care in the titanic task she undertook. And, fearless as always, the Queen did not hesitate to join her husband in going up to the front lines. 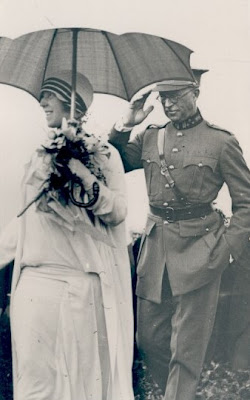 In those hard, terrible days of World War I, in Flanders on the western front, the whole world saw what the Belgian Queen was made of; she was not so delicate as she appeared. The Queen set an example for everyone around her, enduring enemy shelling, trips to the trenches and all the hardships of war without flinching but always looking for what more she could do. Part of this included her establishment of an orphanage for the children suffering from the war. No one met her who was not impressed by her. When the nightmare finally passed, when Belgium was finally liberated, she rode alongside the King in their triumphant return to Brussels. The following year, in 1919, she accompanied her husband to the United States where the American people cheered them as the first heroes of a war they had been late to enter. In 1928 and again in 1932 the Queen accompanied her husband on tours of the Belgian Congo where the city of Elisabethville was named in her honor. She was just as close and supporting a wife as she had always been and shared with the King a desire to see the vast Belgian colony improved, reformed and modernized. However, only a few years later in 1934 King Albert I died in a mountain climbing accident. Queen Elisabeth was crushed by the loss and would never be quite the same again.

As Queen mother, Elisabeth continued to encourage the arts and sciences (befriending Albert Einstein among other prominent thinkers). During World War II she used what connections she still had in Germany to help save the lives of numerous Jewish children. She never changed. However, after 1934 it was as if she was only counting the days until she could be reunited with her beloved husband. Still, she remained devoted to her causes, her family and her country, going her own way even when it caused controversy until she finally went to join her beloved husband on November 23, 1965 in Brussels. Queen Elizabeth was, at times, unorthodox but she was also the ideal consort by every measure. She adored her husband and was his strongest support in his most difficult days, she was a devoted mother, provided well for the succession and she was fearless in her care for her adopted country. She was, in every way, a great Queen.
Posted by MadMonarchist at 12:41 AM