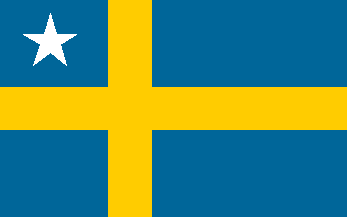 On the face of it, Texas and the Kingdom of Sweden would seem to have very little in common. Sweden has a monarchy, Texas does not. Sweden leans heavily to the left in politics, Texas leans more to the right. Sweden is not very religious these days while Texas still takes faith fairly seriously. Yet, Sweden and Texas do have some things in common such as having an independent streak when it comes to defense issues, taking the art of having fun very seriously and for some reason making many of their neighbors nervous. The Kingdom of Sweden had little to no contact with Texas during the colonial days and the era of the Republic but Swedish immigrants began coming to Texas in 1848, not long after Texas joined the Union. In time, because of immigration from Sweden and the movement of Swedish-Americans from the northern United States, Texas came to have the largest Swedish population of any state in the American south. There were, however, individual Swedes who came to Texas even earlier such as Swante M. Swenson who came to America in 1836. He traveled to Baltimore, Maryland and then to Alabama where he met up with his uncle Swante Palm (Swen Jaensson) in 1844.

Swenson became very prosperous and soon purchased a plantation in Fort Bend County. He became good friends with General Sam Houston, former President of Texas, who urged him to invite more Swedish immigrants to move to Texas and settle the interior of the state. Swenson took his advice and in 1848 brought the first group of 25 Swedes to Texas, mostly from Barkeryd parish in northern Småland and most of whom were relatives of Swenson and Palm. After selling off his assets, he took the new settlers and started a new life in central Texas. More immigrants came later, being forwarded travel money in return for their labor after they arrived. A depression in 1873 slowed things down a bit but by 1878 immigration had resumed. By 1880 there were 364 Swedes listed on the Texas census. During this time Swenson had prospered enough to buy a large amount of property in Northwest Texas on which he established SMS Ranches which were operated by his sons and employed many ranch managers and cowboys from the Swedish immigrant population. They adapted well to life in Texas while adding some Swedish flavor to the Lone Star State. In 1899 the Swensons founded the town of Stamford in Jones County, populated primarily by Swedish immigrant ranchers and farmers.

By 1900 there were more than 4,000 Swedes living in Texas but within the decade, immigration dropped off. However, as mentioned, more Swedish-Americans began arriving from the north, many from Illinois. Even today, the Kingdom of Sweden is known for its many newspapers and the Swedes in Texas were no different, founding a number of them, the most prominent and long-lasting of which was the “Texas-Posten” which was published in Austin from 1896 to 1982. In 1906 Swedish Texans sponsored the establishment of Trinity Lutheran College in Round Rock and in 1912 Methodist Swedish Texans founded Texas Wesleyan College in Austin. Both closed by the 1930’s but Trinity Lutheran College merged with Texas Lutheran College to become Texas Lutheran University in Seguin and the assets of Texas Wesleyan College were sold to the University of Texas with some of the funds going to establish the Texas Wesleyan Foundation which provided scholarships for hundreds of Texas children of Swedish ancestry. By the 1940’s there were large concentrations of Swedish Texans in and around Stamford, Lyford, Melvin, Brady, Dallas-Fort Worth and Waco. Even where there are not large Swedish populations, the Texans of Sweden have left their mark on the map with places like Govalle, Lund, Manda, New Sweden, Hutto, Swedonia, East Sweden, West Sweden, Palm Valley, Swensondale and even Bergstrom Air Force Base. By 1980 almost every major city in Texas had a Swedish population of several thousand.

Additionally, the Swedes have left their mark on Texas. When most people think of Texas, they think of cattle ranches, cowboys and oil wells and there are plenty of those but they may not realize that Texas is a major center for things like computers, rocketry and space exploration too. The Swedes proved themselves capable of being ranchers and cowboys early on but they also stood out in other fields as well. For example, the co-founder of Texas Instruments which pioneered such developments as silicon transistors, integrated circuits, pocket calculators and semiconductor microprocessors was Swedish Texan Erik Jonsson. Another notable figure was Carl G. Cromwell, former mayor of Dallas who contracted the drilling of the famous Santa Rita oil well and who became drilling superintendent for the Texon Oil & Land Company. Swedish culture can be found in many parts of Texas and the long ties between the Kingdom of Sweden and Texas were celebrated especially in 1988 to mark the anniversary of the arrival of the first Swedish settlers. The festival was called “New Sweden ‘88” and included many cultural events in central Texas but the highlight, of course, was the visit to Texas of HM King Carl XVI Gustaf and Queen Silvia of Sweden, making the King the first Swedish monarch to ever visit Texas. Today there are over 100,000 Texans of Swedish birth or ancestry and hopefully the close friendship between Texas and the Kingdom of Sweden will only grow stronger in the future.
Posted by MadMonarchist at 12:06 AM