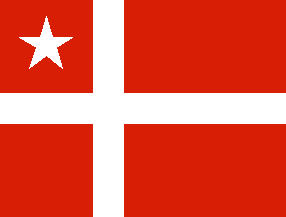 The history between Texas and the Kingdom of Denmark goes back quite far. The first Danes to come to Texas that we know of by name came during the colonial period when Texas was still under Mexican rule. Most were sailors who visited the area and decided to stay. Such a man was Peter Johnson, a Danish sea captain who sailed the Gulf of Mexico, visited the Texas coast and began trading in Indianola before deciding to settle there. Another was John Edward Henrichson who moved farther inland and became a rancher near the largely Irish settlement of San Patricio. Others came over from the United States such as the Danish cattleman Christian Hillebrandt who drove his cattle from Louisiana into East Texas and established himself as one of the earliest Texas ranchers. However, the most famous of these early individuals was a Dane who credentials as a “true Texan” would be tough to beat. Not only did he design the first “Lone Star” flag of the war but he later gave his life defending the Alamo. Most history books record his name as Charles Zanco but his real name was Charles Lanco. It was the summer of 1835, the first year of the war, when William Scott announced to the people of Austin’s colony in Lynchburg that he would equip anyone willing to volunteer to fight for Texas independence from Mexico. About 30 men volunteered immediately and one of those brave men was a 28-year old artist from Denmark named Charles Zanco.

These thirty formed a company with William Scott as captain. Later, Captain Scott gave four yards of blue silk to Lieutenant James McGahey with orders to come up with a flag for them. Knowing he had an artist in the ranks, Lt. McGahey took the material to Charles Zano and asked him to paint a design on it. The Danish design was simple but striking, a large, white, lone star in the center along with, at the suggestion of McGahey, the word “Independence” at the bottom. When the Danish-designed flag was first flown at Lynchburg, two boats of armed men coming up from Harrisburg (modern-day Houston) spotted it and began cheering “Hurrah for the Lone Star!” The uplifting effect this had later caused many to mark the occasion as the beginning of the war for independence in southeast Texas. Later, the flag and Charles Zanco saw action with Scott’s company at the battle of Concepcion Mission in October of 1835. The following year, the Danish volunteer gave his last full measure of devotion at the battle of the Alamo, by that time have been promoted to lieutenant in the ordinance department.

Because of Lt. Charles Zanco, the flag of Denmark has and will always have a place of honor in the Alamo, “the Shrine of Texas Liberty”. However, Danish interaction with Texas did not begin on a sizeable scale until after the War Between the States. Two Texans named Travis Shaw and John Hester happened to be visiting the Kingdom of Denmark. Impressed by what they saw, they thought Texas needed some Danes and so they asked if anybody was interested in moving to Texas. A few agreed and were sold land by Shaw and Hester in Lee County. Prices were cheap and at the time, owning property for most any common man in the small countries of Europe was nearly impossible so this was viewed as an opportunity. About 20 families of Danes made the voyage across the ocean first but more came later in the following decade. The first settled in Lee County of course, as did the later arrivals. Most established themselves in an area around eight miles west of the County seat of Lexington. The area came to have such a Danish flavor that it became known as “Little Denmark”. The early settlers were noted for their industriousness and most all were employed in productive occupations such as Paul Paulsen who was a cabinet maker, Niels Thompson who was a bricklayer and Peter Jensen who was a blacksmith.

Danes later settled, in smaller numbers, in diverse parts of Texas and many had a great impact. There was George Henry Trube who founded a mercantile dynasty in Houston and Galveston, Christian Dorbrandt who became a Texas Ranger and Charles Grimur Thorkelin Løvenskiold who came before the Civil War and worked as a schoolmaster, a lawyer and became a colonel in the Confederate army from Corpus Christi during the war. The earliest settlers included many farmers and at first they maintained there own customs such as Danish food, having coffee and pastry every morning and afternoon and observing Danish holidays. However, very rapidly they adopted the ways of their neighbors until they could hardly be distinguished from anyone else. Apart from Lee County, Danes in Texas and those arriving began settling in Gillespie County as well, around Rocky Hill, east of Fredericksburg -undeterred by the heavy German presence there. One Danish Texan by the name of Christian Mathisen even moved to Fredericksburg, worked as a blacksmith and even invented an early wind-powered electric generator as well as coming up with some brilliant, new agricultural methods. Today, Texas is one of the leading producers of “wind energy” in the United States and, you could say, it traces all the way back to that inventive Texan from Denmark.

Most Danes began speaking English exclusively early on, however, Danish survived the longest in the Lutheran churches they founded. Formal Danish was spoken in church services until 1954 and a women’s church group, “Den danske Kvindeforening” spoke Danish or “native Texas Danish” until 1971. The community was once known for celebrating a combination of Danish Constitution Day and United States Independence Day as well as Christmas. Both usually included a circle dance around a community tree and singing at least a few Danish songs. The largest Danish settlement was Danevang, established in 1894 mostly by Danish-Americans moving south from northern states. Although it eventually diminished over time as the locals intermarried with others, moved on to other areas and “assimilated” more in the 1920‘s, there was still a population of 60 in 1990 and the local Danevang Lutheran Church is still open. There is also a Danish Heritage Museum in town. Although not as pronounced as some groups, there are still many thousands of Texans who are of at least partial Danish ancestry. While others may have had a bigger influence on Texas, the Kingdom of Denmark has been a part of Texas history from the beginning and, hopefully, the ties between Denmark and Texas will only grow stronger in the years to come.
Posted by MadMonarchist at 12:07 AM