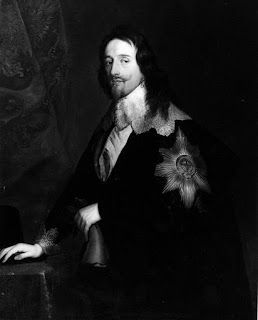 King James I: My opinion of the first Stuart to rule England is rather mixed but overall the needle does tip slightly in the positive direction. He did not always keep his word but in general he was a fairly tolerant man so long as no one made trouble. He was renowned for his intelligence yet mocked for his odd habits, hence being called “the wisest fool in Christendom”. A better epithet for James I was “Britain’s Solomon” and his writing about monarchy was excellent and some of my favorite material. I also love his imperial style in emphasizing the unity of England, Scotland and Ireland under one monarch. He was not perfect but much of the negative things said about him may not be true and while I cannot really cheer for him, his written works make it impossible for me not to be a little positive towards him, I think they’re that good.

King Charles I: One of my all-time favorites, I like King Charles I both for what he did and for enraging all the right people. The problems he faced were not of his own making (some of the economic mess went all the way back to Henry VIII) and he should be applauded rather than criticized for his firm principles. It may have been smarter for him to have backed down but I admire him all the more for standing up for what was right, regardless of the circumstances. I admire his piety, his great devotion to his family, his fidelity to his wife (a remarkable woman) and for his courage. He met his death in a truly heroic way and, as he point out at his trial, was fighting for the rights of everyone by fighting for his own rights as king. That being said, he was not as rigid as most think and tried to be reasonable, giving in to most of the demands of Parliament but not on the most important points and he should be saluted for that. He was a man of great integrity who make have made some missteps but who was always motivated by a desire to do the right thing.

King Charles II: I cannot admire Charles II as much as I do his father, but he was certainly more successful and a very good man deep down. That being said, he was a hopeless womanizer and serial adulterer which prevents him having my unabashed admiration. However, while his court was certainly on the licentious side, after the dour years of the Puritanical Cromwell, it was probably to be expected. While lacking the unbending principles of his father, he did see the monarchy restored and that would probably not have happened if he had not been willing to compromise on some things. Still, at the end of the day, he did reach his limit and stood firm in defense of the monarchy and the monarchial principle of hereditary succession in particular, for which he can be applauded. It is easier to see the good man underneath when considering how he defended his wife and begged her forgiveness on his deathbed. One can also see his principled belief in monarchy and the importance of family in his defense of his brother in spite of the fact that he predicted disaster for him.

King James II: I have a much higher opinion of James II than most, but that’s not hard. He’s one of the most unpopular and maligned monarchs in English history and unjustly so in my opinion. Like his brother, he fell prey to the temptations of the flesh, but to a vastly lesser extent. He was a brave and capable soldier (sailor) and was a man of principle and conviction. The opposition to him was mostly hysterical rather than reasoned and while he certainly wanted to do away with the anti-Catholic prejudice then rampant in Britain, most forget that he never actually did anything to reestablish Catholicism as the state religion. Everyone was just afraid that he would and his efforts to remove laws that discriminated against Catholics and non-Anglican Protestants would today be taken for granted as reasonable and laudable. He did, however, probably go too far too fast considering how much Catholic-phobia existed in the country. Despite what many say, he was a courageous man but the fate of his father no doubt loomed large in his mind and in England and later in Ireland one cannot help but wonder if he might have maintained his throne if he had stuck it out just a bit longer. However, that he was the legitimate, hereditary sovereign of the three kingdoms cannot be denied and, for this monarchist, that matters most.

King William III & Queen Mary II: Given my sympathy for James II, I cannot but have some mixed feelings when it comes to William and Mary. Yet, while turning against your father and legitimate monarch is something I could never condone, each were very talented and remarkable individuals. William III showed immense skill and determination in fending off the French and was quite a capable military leader. Queen Mary was a dutiful wife, a capable ruler in her own right, a devout woman intolerant of sin and vice and who at least had enough of a conscious to feel rather guilty about what she and her husband had done to her father. That inclines me to be a bit more favorable toward her than I would otherwise. For William III, he set up the system of constitutional monarchy the U.K. still has today, which seems less ideal than what had existed previously to me, yet, William III was never really focused on Britain but on The Netherlands and the broader strategic situation in Europe. The changes effected under his reign, if one is inclined to dislike them, should direct most of their criticism at the men who invited William to launch his invasion and then who welcomed it with open arms rather than at the King himself.

Queen Anne: I have much the same difficulties with Queen Anne as with Queen Mary II. Her betrayal of her father (and sovereign) and spreading doubts about the legitimacy of her half-brother are things I find it impossible to overlook. There were some great national achievements during her time but little had to do with her. The Act of Union was passed, but done in a less than ideal way. On the battlefield Marlborough (“Corporal John”) proved himself to be one of the great captains of his age and one of the greatest military geniuses Britain has ever produced but there too there were problems between his family and the Queen. She was a devout Anglican, took her royal duties seriously (and was famously the last monarch to veto an act of Parliament) but overall she leaves me with the impression of a gloomy and pathetic figure, plagued by illness and a succession of miscarriages. It would be hard not to feel sorry for the poor woman but, under the new royal system, the ship of state sailed on in any event and she must be given at least some measure of the credit for Britain emerging or reemerging as a great power during her reign.