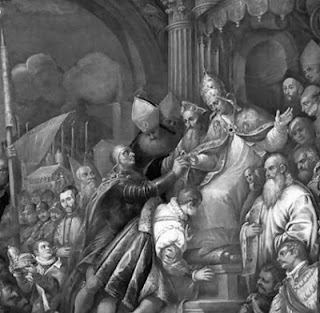 During the period when the papacy and the German emperor (officially the Emperor-Elect of the Holy Roman Empire of the German Nation) were in a state of near constant struggle, one of the most vociferous in defending the rights of the Pope and opposing the Emperor was Pope Alexander III, and it was no easy task as rarely has the Catholic Church been so divided as in his time. He was born Orlando Bandinelli around the year 1100 in Sienna. Originally a law professor, he was called to Rome in 1150 by Pope Eugene III. After that, he rose quite rapidly in the Church, being first created Cardinal Deacon and then the Cardinal Priest of St Mark and Papal Chancellor. As an advisor to Pope Hadrian IV he was prominent among the faction of cardinals who opposed the imperial-German influence on the Italian peninsula and favored an alliance with the Normans in Naples to free Italy from the German grip. In 1157 at the Diet of Besancon he earned the long-lasting wrath of the Germans for saying that the rank and title of emperor was a favor of the pope, a “papal beneficium” rather than something that came to the German rulers automatically or directly from God. Otto von Wittelsbach nearly separated his head from his shoulders then and there but Emperor Frederick I (the famous “Frederick Barbarossa”) prevented any bloodshed. 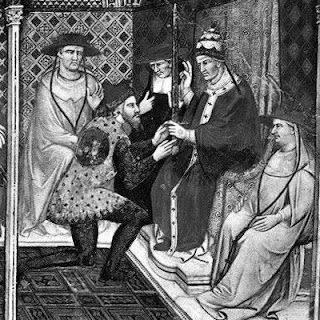 The stage was set for a showdown between pope and emperor as, in the final stage of his reign, Hadrian IV broke with the Hohenstaufen monarch and, as Cardinal Bandinelli had suggested, allied with the Norman Kingdom of Sicily. This prompted Emperor Frederick to clamp down and extend his imperial claim across northern Italy just before Hadrian IV died. When the cardinals met to elect a successor, the German Emperor dispatched two reliable figures to influence the Sacred College in his favor. They were not entirely successful. On September 7, 1159 Orlando Cardinal Bandinelli was elected to the See of Peter by a considerable margin, however, the atmosphere was extremely divided and hostile. Cardinal Octavian snatched the red mantle from Bandinelli and a scuffle ensued in which the garment was torn to pieces. However, finding another, Cardinal Octavian announced himself as pope to some priests gathered elsewhere in the Basilica of St Peter and the doors were flung open to let in a mob, hired with imperial funds, cheered him as the Bishop of Rome. The actual Pontiff, taking the name of Pope Alexander III, had to isolated himself for a time before escaping to the safety of Norman-held southern Italy. Meanwhile, Cardinal Octavian declared himself “Pope Victor IV” (though he was not the first “Victor IV”) and was consecrated at Farfa monastery on October 7. Alexander III had, by that time, already been crowned on September 20 in Nympha. 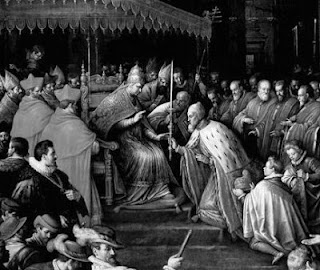 With Pope and anti-Pope opposing each other, Emperor Frederick had the perfect opportunity to intervene as the good imperial defender of the Church, rescuing it from division and disorder. However, the meeting he called at Pavia came to nothing as when he addressed the rivals as “Pope Victor IV” and “Cardinal Orlando” it was pretty clear that he was not an impartial or fair mediator. Pope Alexander III refused to recognize the gathering as having any validity which dutifully declared the anti-Pope Victor IV as the legitimate Successor of St Peter just as the Emperor wished. In the aftermath, Pope Alexander III excommunicated Emperor Frederick I and absolved all of his subjects of their allegiance to him. This led to open warfare between the Pope and the Emperor who had the support of some monarchs and the opposition of others depending on their situation while Pope Alexander III was in an extremely difficult position as all of Christendom was divided as to whether or not he was the legitimate pope. During his reign there appeared on the scene no less than three anti-popes to oppose him (Victor IV, Paschal III, Callistus III and Innocent III) which complicated the situation to no end. 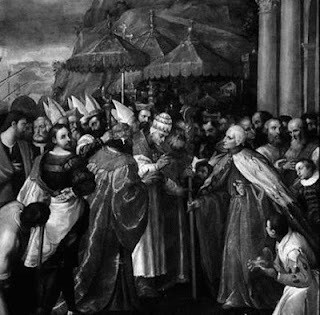 However, ultimately, the schism did not work out to the benefit of the Emperor Frederick I who came marching down the Italian peninsula with an army of German knights. Pope Alexander III called for a pious and patriotic unity of Italians to oppose this invasion and the result was the formation of the Lombard League which included most of the cities of northern Italy, banding together to resist the German onslaught. This was certainly significant, even simply as an act of courage given the might and proven military abilities of the famous Frederick Barbarossa. The idea that an embattled Pontiff and a few Italian city-states would stand in defiance to one of the greatest German conquerors of all time must have astounded a great many people. Even more astonishing is that the German emperor was defeated. At the battle of Legnano in 1176 the forces of the Lombard League won one of the greatest victories in Italian military history. The Emperor himself was believed to have been killed for a time but, though wounded, he did survive and afterwards was obliged to withdraw from Italy and recognize Alexander III as the legitimate, validly elected Pontiff. In the early days of Lutheran Protestantism, it was popular to show Pope Alexander III putting his foot on the neck of a prostrate Frederick Barbarossa as a way to inflame popular opinion against the papacy for the defeat of a great German hero. In fact, of course, nothing of the sort ever happened. 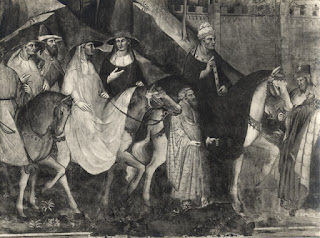 In fact, Alexander III had gained some support in Germany. In his effort to get Christendom united behind him he tried to enlist the support of the Byzantine Empire but was turned away. Even after his triumph over Frederick Barbarossa there were plenty of troublesome heresies to deal with and the lingering tension over Church-State relations. With the Waldensians (the holier than thou crowd) and the Albigensians (the world is evil and everyone should die crowd) spreading their influence, Pope Alexander III called the Third Lateran Council where his immense talent as a canon lawyer was on full display. The council condemned the new rising heresies and called for a greater emphasis on education as a way to ensure that such unorthodox beliefs never develop and are rejected when they appear. He also always asserted Church independence from the secular powers and papal authority over the kings of Europe. Aside from his dramatic struggle with the German emperor this was seen in his support for St Thomas Becket in England in opposition to another great monarch; King Henry II. There were no invasions or bloody battles but, like Frederick, King Henry II did finally come around to accept the position of the Pope, doing penance and asking forgiveness for his part in the murder of Becket.

The prestige of the papacy rose somewhat during the time Alexander III was exiled to France and locked in combat with the German emperor. It often seems the papacy is never so popular as when under direct attack. Still, Alexander III attracted plenty of criticism, both for his determination in asserting the rights of the Church as being apart and above those of the state but also because of his cautious nature and his willingness to hear out both sides of an argument. Because of this, there were those, then as now, who accused the pontiff of being “shifty” and simply putting off taking a side until the victor was clear. He was not always the best diplomat but he was an unwavering defender of the rights of the Church. He died on August 30, 1181 at Civita Castellana after reigning for 21 years. At his burial a stone-throwing angry mob attacked his funeral procession which should be kept in context with the tumultuous and divisive events of his reign and only puts him in the lofty company of someone like Pope Pius IX.

Posted by MadMonarchist at 8:01 AM