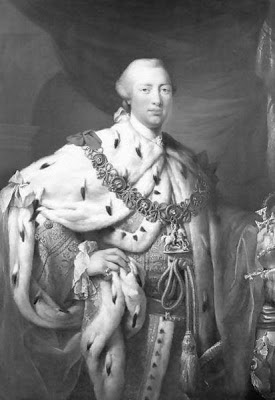 King George I: If nothing else, one can at least say that Britain’s first German monarch was a colorful character. A distant relative thrust onto the British throne by the 1701 Act of Settlement, something which further cemented the notion that the King reigned ‘by the grace of Parliament’ rather than the grace of God. He had no burning desire to be King of Great Britain and had already proven himself a fairly competent Elector of Hanover. He is known for his mostly “hands-off” approach to governing, which gave rise to the first British Prime Minister as we would understand it today, for his mistresses, his contempt for his eldest son (a Hanoverian tradition) and his inability to speak English. Still, he understood English law and government better than most of his subjects realized, he kept a steady hand on the wheel and if his British subjects did not understand him, he likely understood them just as little. Hanover was always his home and his first concern, he hadn’t sought to be king and certainly launched no invasion to bring it about like the Prince of Orange but he nonetheless made the most of it. He was not a likeable character but was probably at least somewhat better than most think.

King George II: Like his father, there is not an overabundance with which to recommend George II. He hated his son just as his father had hated him, though he was more kind to his wife (not difficult) and the British Empire grew considerably under his reign. Still, he spent some lengthy periods in Hanover and was always more concerned with Germany than with, for instance, the British North American colonies. The 1745 Jacobite uprising gave him quite a scare but he was certainly no coward, being the last reigning British monarch to lead his troops on the battlefield. Overall, he was a fairly effective monarch, fulfilling the traditional requirements for a successful monarch; securing the succession, defending his throne, winning victories in war and enlarging his domain. Still, he tended to put Hanover before Britain, was not a very likeable person and his forces were positively brutal in Scotland in the aftermath of the ‘45. So, all in all a successful monarch but one I could never muster a great deal of enthusiasm for.

King George III: It is a shame that George III will probably always be remembered most for losing “the United States” and for going “mad”. He really deserves to be counted among the greatest of British monarchs. For the first time since Queen Anne the country had a monarch who didn’t speak with a German accent and who was as thoroughly “British” as he could be. Unlike his predecessors, he took an active role in the government of his kingdoms and far from being harsh or tyrannical was almost invariably a voice of fairness and consideration. Also unlike his predecessors, King George III was a man of upstanding moral integrity, a faithful husband, devoted father and a man of great generosity while still having enough of George II in him to appreciate a balanced budget and deplore extravagance. Still, tradition being tradition, he and his eldest son never got along very well, mostly because of the extent to which the King disapproved of the rather weak moral fiber in his son. It should not be forgotten though that while losing what became the USA, he won the wider war and although he would not forget he was able to put the past behind him without holding a grudge, establishing diplomatic relations with the United States and going to war with revolutionary France after his old enemy Louis XVI was murdered by the mob. He also certainly secured the succession (in a big way) and was, in every way, a monarch any of his subjects could be proud of.

King George IV: When it comes to character, George IV was everything his father was not; licentious, lazy and wasteful. Still, he was not a terrible monarch though certainly not a great one. He may have been extravagant but he had a tremendous sense of style and he left Britain a more grandiose country than he found it. Yes, he was a scoundrel, but also a patron of the arts, a driver of fashion and a great builder. Those are about his only redeeming qualities though, aside perhaps from reviving highland dress in Scotland. His reign (and regency) coincided with some of the greatest moments in British history, the passing of historic legislation and at least he did not manage to mess any of that up though, based on what his ministers wrote some may have suspected him of trying. He was not a monarch one could admire, though many found him likeable. He did have sense enough to realize at least to some extent when politicians were trying to take advantage of him and his political views shifted after inheriting the throne. So, not a great one, not very praiseworthy but neither can it be said that things went to ruin under his watch.

King William IV: The “Sailor King” William IV often seems to get lost in between his colorful and controversial brother and the historic reign of his niece. Overall, my impression of William IV is as a pretty good, solid monarch. In sharp contrast to his brother he was frugal, plain and blunt which was probably a good thing on the heels of the fuss and feathers of George IV. William IV could behave in ways rather lacking in “majesty” but he was a man of strong leadership, good instincts and common sense. Since the reign of his father the politicians had become more and more dominant, which mostly continued under William IV though he was the last monarch to appoint a prime minister of his own choosing. He provided steady leadership during his time on the throne and had the wisdom and fortitude to hold on to life long enough for his niece to succeed him without a regency -probably saving the country from a great deal of trouble.

Queen Victoria: In some ways, Queen Victoria can be seen as being more revered than she should be and yet, I at least cannot help but have the greatest admiration for her. She made her share of mistakes over the years but she had a presence few other English sovereigns could ever hope to match. Like Elizabeth I, she gave her name to an era and on the world stage it was the Victorian era that was far greater. The Queen deserves at least some of the credit for the great, powerful, dynamic force that the British Empire became during her reign and she was an admirable woman. A very devoted wife, a reluctant (but frequent) though dutiful mother and a woman of impeccable moral fortitude. Queen Victoria made the monarchy widely respected again as well as a force for good in society with the outreach to the poor, the working class and her strident opposition to racial bigotry. Like a few others, it is hard to separate the Queen herself from the image of the Queen but that image was so great and remains so brilliant that it seems a pity to even try. The first to made Empress of India, the British Empire may have grown larger after her time on the throne yet it is still the reign of Queen Victoria that stands out, in my mind at least, as the pinnacle of the British Empire. Plus, she really was the “Grandmother of Europe” and anyone who doesn’t love their grandmother must have something wrong with them.