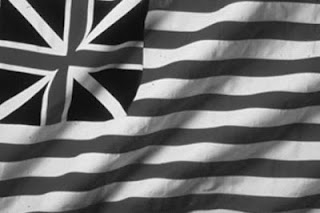 Modern-day Americans, for completely understandable reasons, idealize their colonial forefathers as the founders of their ideals and federal union. They are portrayed as noble, upright, God-fearing patriots who were champions of liberty, democracy and all the usual, “truth, justice and the American way” stuff. Perfectly understandable but also very far from the truth. In many instances it was more like being the champions of assault, vandalism, theft and racial and religious bigotry. A case that illustrates this is that of HMS Gaspee. It may not be as well remembered today as the mob assault of the so-called “Boston Massacre” or the large-scale theft and vandalism of the “Boston Tea Party” but it was just as famous at the time and served to keep the revolutionary fervor up between those two more famous events. The background for this case is tied up in all the commercial regulations and taxes that the American colonials had a problem with. However, in reality, these were not often much of a problem since smuggling and the buying and selling of illegal goods was so widespread. One area that was a particular hotbed for smuggling was the many coves and inlets of Narragansett Bay just off Rhode Island. It became such lucrative location for smugglers that they were positively bumping into each other and the Royal Navy dispatched a warship, HMS Gaspee, to the bay to deal with the smuggling problem.

The schooner was under the command of Lieutenant William Dudingston who arrived in the spring of 1772 and he proved to be an officer dedicated to his duty and quite successful. Did the locals applaud this enforcer of law and order on the water? Of course not! They sympathized with the criminals and were extremely peeved with Lt. Dudingston for cutting such a swath through the illegal trade going on in the area. While the local colonials were more than happy to romanticize breaking the law, they demanded that the man upholding the law be treated like a criminal and the elected governor of Rhode Island, Joseph Wanton, was quick to heed their cries lest he be voted out of office. He was not a radical revolutionary by any means but he was also a man of rather little spine. So, he threatened to have Lt. Dudingston arrested! Yes, imagine that; the local governor wanted to arrest the man enforcing the law rather than the smugglers who were breaking it. In fact, he wanted to arrest a man for bringing actual criminals to justice. Obviously, the lieutenant was not impressed by this and reported the threat to his admiral who entered into a rather testy exchange of letters with Governor Wanton who was being pushed on by the wealthy merchants of his colony who profited immensely from the illegal trade.

Ultimately, more than words were exchanged as HMS Gaspee went about the business she was assigned to. On June 9 the ship was in hot pursuit of a smuggler sailing very close to the shore when she ran aground near Providence. Nearby was Sheriff Abraham Whipple but if one would expect a lawman to be on the side of upholding the law one would be quite mistaken. His support was firmly with the smugglers and he took advantage of the misfortune of the Gaspee and gathered a group of like-minded colonials who rowed out to the immobilized schooner than night. When the little flotilla was spotted, Lt. Dudingston called out, “Who comes there?” The sheriff shouted back, “I am the Sheriff of the County of Kent G** d**n you! I have a warrant to apprehend you, G** d**n you -so surrender, G** d**n you!” Then as now, Royal Navy officers are not in the habit of surrendering to foul-mouthed county sheriffs for upholding the King’s laws and he politely refused. So, the sheriff and his party forced their way onto the ship (the crew compliment of a schooner not being very large) and when the lieutenant pulled his sword to defend himself one of the colonials shot him in the groin. Ouch! 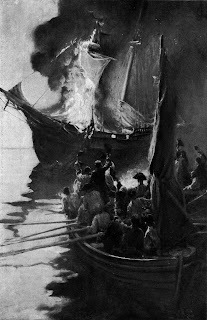 A surgeon was rushed in to tend to the wounded officer and then the lieutenant and his crew were hustled off the ship which Whipple then set fire to. It was not the first time that colonials had attacked ships in defense of smuggling but it was certainly the first time that a local official had ever burned one of His Majesty’s armed vessels and assaulted one of the King’s officers. Orders were dispatched from Great Britain for those involved to be charged with treason and (most importantly) brought to London to stand trial for it. However, the urge for swift justice fell afoul of a confused bureaucracy and widespread colonial outrage so that in the end no one was ever punished for the crime. This certainly gave courage to the rabble-rousers in America and the case became famous across the colonies with radicals somehow managing to portray the lieutenant as the villain and the defenders of smuggling and organized crime as the heroes. The incident, in fact, led to the formation of the “Committees of Correspondence” which were organized across the American colonies and which were little more than the older “Sons of Liberty” groups under a more mature-sounding name. In fact, they contained so many of the same people and advocated so much the same message and tactics that the two groups were effectively identical.

The consequences were more far reaching than most people realize. The Gaspee Affair (as it tends to be called) prompted the formation of the Committees of Correspondence which led to greater unity throughout the American colonies in fomenting revolution. The greater level of organization as well as the impression that British laws could not only be ignored but that a British warship could be attacked and still have a sizeable portion of the public sympathize with the attackers who went unpunished led ultimately to the events of the Boston Tea Party. With that bit of vandalism, undoubtedly to the surprise of many who remembered the Gaspee Affair, Britain finally decided that enough was enough and took repressive measures. They learned, perhaps a little too late, that when the public embraces criminal behavior and when elected civil officials start to pick and choose which laws they will uphold and which they will not (sound familiar) the country is on a fast track to disaster.

Posted by MadMonarchist at 2:18 AM