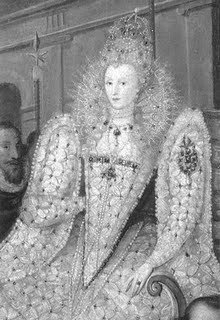 King Henry VII: The Wars of the Roses that had stagnated and bled England for years finally came to an end with Henry VII, founder of the Tudor dynasty. My impression of Henry VII was that of a not terribly pleasant man, not someone very flashy or inspirational but a very cautious, shrewd and talented national leader. The stability he brought was welcome though he seems to have been a bit of a control freak which opened the door for some problems but he was basically a competent and successful monarch, keeping the country on an even keel, providing for the succession and securing a marriage alliance with the emerging super-power of Spain. He was rather cold and miserly but given his life it is not surprising that he was a rather hard-nosed, unemotional sort of man who kept his eye on the prize and the bottom line. Neither great nor terrible he was a pretty solid monarch.

King Henry VIII: Oh, what a waste! One of the worst things about all of the chaos caused by Henry VIII was how unnecessary it all was. He changed the religion of a country and cut a woman’s head off just to have a son and as it turned out his most famous offspring was his youngest daughter. Henry VIII was like the schoolboy captain of the football team, fawned over in his youth and then a fat disgrace in middle age. His religious tinkering set England on the path for many, many years of turmoil and it seems so useless as he was never really a Protestant. He had great qualities, being quite the dashing warrior-king in his youth, presiding over some great achievements and he was quite intelligent and took his duties seriously. But he was also vindictive, paranoid, cruel and possibly the most selfish man to ever sit on the English throne. I approve of some of his foreign policies but by the time it was over he had undone most of the good he ever did and was just not a good man. Not one of the good ones to be sure. Others were worse in their own time but Henry gets extra demerits for setting the stage for future disasters.

King Edward VI: The boy king, or “God’s Imp” as someone called him, there is not much I can say about Edward VI because he never had a chance to prove himself and the fanaticism he displayed was the result of the guardians who raised him. In his personal dealings with people he seems to have been a sweet boy. He was certainly very gifted, extremely intelligent and might have made an exceptional monarch were he given the chance. If the religious zealotry instilled in him had remained he might have turned out to be terribly harsh and done Protestantism more harm than good, which is odd given that his mother was nothing like that. So, it was definitely environmental rather than genetic.

Queen Mary I: No other English monarch has received more bad press than “Bloody Mary”. Protestants despise her and even most Catholics consider her to have done the Church of Rome more harm than good. Nonetheless, I will always defend Queen Mary, truth be told, she was nowhere near that bad. In fact, she was quite a kind woman, compassionate, generous to the poor and very fond of children. Despite what the xenophobes claim, her marriage alliance with Spain was a smart move and while she will always be known for having 300 Protestants burned alive, she didn’t turn nasty until people started turning against her. Initially, she was prepared to forgive and forget and she actually had fewer people executed than her father or more popular sister did. Many burned for heresy could have been executed for treason anyway. For me, the biggest point to remember is that she never inflicted anything on others that she would not have endured herself. She was not, like her father, executing people just for not going along with her but because she truly believed that Catholicism was the only true faith and anything else was dangerous and even under great pressure from her father and brother she never renounced her Catholicism for the sake of convenience. Her zeal was genuine.

Queen Elizabeth I: Not one of my favorites, I must admit. Still, I will give credit where credit is due. “Good Queen Bess” was a public relations genius and totally brilliant when it came to promoting the public image of herself and the monarchy. She presided over some great cultural and political achievements but, all that being said, though I was once a fervent admirer back in my frivolous college days, I cannot say many good things about her. She failed to marry and secure the succession (a dereliction of duty in my view), she supported republican rebels in Holland fighting against their lawful sovereign, supported rebels in France and most outrageously, signed the death warrant for a fellow monarch. Yes, she agonized over it, but she still did it (she wasn’t a very decisive leader at all) and in my book that is unforgivable. Her religious persecutions seem worse to me than those of her sister because, as a Protestant historian said of her, she was both “intolerant and indifferent”. She changed her religion depending on who was in power at the moment and yet, when her turn came, put people to death for having stronger principles than she did. I know many consider it an unpardonable sin not to love Queen Elizabeth I, but I cannot, though I will readily admit that her “image” was certainly glorious.