The Thousand Lands in Sicily 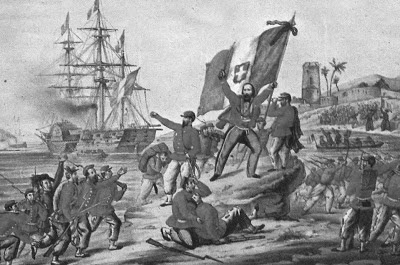 It was on May 11, 1860 that Giuseppe Garibaldi and his “Thousand” red shirts landed at Marsala on the island of Sicily to instigate the uprising against the Bourbon rule of King Francesco II. Although an independent operation, Garibaldi was certainly not without outside support or sympathy. Elements within the government in Turin certainly supported him (as did pan-Italian nationalists in general but this was a stateless group) and beyond the Italian peninsula there were numerous sympathetic governments, one of the most prominent being that of Great Britain (and not just because they appreciated the fashion-sense of his army). It helps to explain how such a seemingly hopeless and even farcical operation turned out to be such a stunning success. After all, it seems incredible that an invasion force of a thousand men could end up bringing down the entire Kingdom of the Two-Sicilies; that long-time Spanish bastion in the south of Italy. Actually, “The Thousand” were probably not even that numerous and they consisted, for the most part, of volunteers drawn from across northern Italy, unfamiliar with Sicily and unaccustomed to the harsher climate of the south. Some were not even Italians at all such as the Hungarian Legion of Italia which fought enthusiastically for the famous Garibaldi after having their own nationalist movement thwarted. How could such a rag-tag group be victorious? 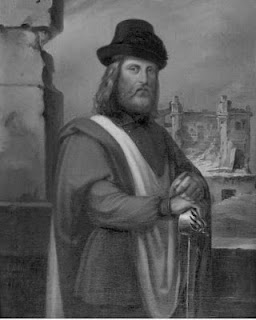 The Kingdom of the Two-Sicilies certainly has the reputation of being a place one would not expect to find much sympathy for a revolutionary like Garibaldi. It has long been known as a very conservative, Catholic, absolute monarchy in traditional Spanish style. However, that proved to be part of the downfall of the kingdom and part of the reason for the lack of international support for the status quo and a pro-Garibaldi attitude from the British in particular. Ever since the Congress of Vienna the “Great Powers” had been most concerned with peace and stability, keeping rebellion from ever breaking out anywhere for fear of it spreading as in the past. The British (and most other northern European monarchies such as Belgium, the Netherlands, Denmark and even Prussia to a degree) firmly believed that the best way to ensure stability as through a constitutional monarchy that provided for some level of popular representation. Effectively, to give the people enough of a voice that they would feel they had some control over the national destiny but never enough to actually determine policy. This, the accepted thinking went, would make the public less susceptible to the arguments of the revolutionaries who wanted the people to rise up and overthrow the monarchy. This is why, in Spain, for example, the French and the British supported the liberal monarchists of the Queen mother rather than the absolute monarchists of Don Carlos. Or at least it was one reason.

King Ferdinando II of the Two-Sicilies, part of the Spanish Royal Family, annoyed the British by siding with Don Carlos. They were also concerned by the growing discontent in the Two-Sicilies and the increasing support for a republican revolution. Why were the British or French concerned at all? What was Sicily to them? The answer, of course, was that Sicily was right next to the British naval bastion of Malta and straddled the main seaway to the Suez Canal which was just starting to be built the year before Garibaldi and his men landed at Marsala. The French and British were therefore greatly concerned about any unrest that might disturb this enterprise upon which so much of global commerce was to depend. The British even sent warships to encourage the Neapolitan navy to stay away while Garibaldi and his men were landing (once the troops had disembarked the Neapolitans destroyed one ship and captured the other). 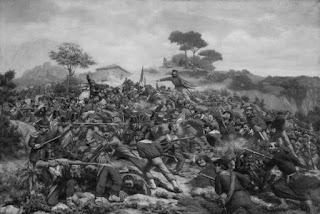 When Garibaldi landed, his forces were not opposed at all. The Neapolitan army, while not exactly having the best reputation in the world, should have been able to swamp such a tiny group with their massive numerical superiority if nothing else. However, King Francesco II inexplicably failed to take decisive action such as leading the army himself. Compounding the problem was the fact that his forces often did more to turn the local population against the monarchy than stopping the invaders. On May 14 Garibaldi declared himself ‘Duce’ of Sicily in the name of King Vittorio Emanuele II of Piedmont-Sardinia and the following day met the Neapolitan army for their first battle. The result was the unimpressive battle of Calatafimi which amounted to a victory for Garibaldi despite being outnumbered 2-to-1. It helped that the Neapolitan commanders seemed to be equal parts incompetent and vindictive. Previously, the one, reliable hardcore of the Bourbon forces had been the Swiss mercenary guard. However, they had earlier gone on strike for better pay and King Francesco II responded by having them all massacred; which was probably not the best idea.

Garibaldi captured Palermo and his ranks slowly grew as locals volunteered to join him. The Neapolitan army also had a problem with desertion. A key element was the local aristocracy who responded in various ways to the crisis, none of them very helpful to Francesco II. Some fled the island immediately as soon as Garibaldi landed and these were those most supportive of the Bourbon monarchy. Obviously, they would be no help. Most, however, considered the cause of Francesco II lost and decided to make common cause with Garibaldi who promised to respect their rights and privileges. This would later cause a degree of rebellion and banditry by those peasants who felt Garibaldi had sold them out by not tearing down the aristocracy completely and redistributing their lands. King Ferdinando II had shown that he would do whatever was necessary to maintain his rule, be it promising a constitution only to revoke it later or shooting down rebels and shelling entire cities to rubble. If he had still been around things might have been different but few had confidence that Francesco II was made of such tough stuff. The pragmatic types looked at the situation and reasoned that the Bourbons were doomed and their only options for the future would be a united Italy ruled by Giuseppe Mazzini and his radical republicans or a constitutional monarchy ruled by King Vittorio Emanuele II. Mazzini was unthinkable so these invariably suppressed their distaste for Garibaldi and supported his red shirt army to maintain the existing social order. 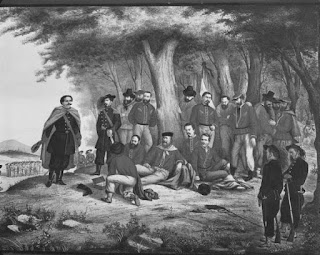 Rebel forces soon besieged Palermo, with disastrous consequences for the Neapolitan side. Political prisoners were broken out of jail, causing panic in the rear and the commanding Neapolitan general seemingly lost his nerve and ordered a retreat only to then order his artillery to shell the city indiscriminately, killing hundreds of civilians, many of whom must have been loyal to the Bourbon monarchy. Naturally, this made the cause of the King in Naples all the more unpopular (though he, of course, had nothing to do with it). Still, more Neapolitan troops arrived and the city might have been retaken but the commanding general, whether due to befuddled panic or simply corruption, decided to surrender. The Neapolitan troops began withdrawing from the island, even where they held the upper hand, and in their absence several peasant rebellions broke out. These were then suppressed by Garibaldi’s red shirts which, again, bewildered many of the locals who had envisioned him as their liberator. These rebels, however, were typical of the types who would have seized power and set up a revolutionary republic if not for the presence of Garibaldi who was moderating his more radical inclinations to win the support of powers like Piedmont-Sardinia and Great Britain.

In a last, desperate effort to avoid disaster and win back popular support, King Francesco II issued a constitution in June but it was to no avail. After the “now you see it, now you don’t” constitutions of his father, very few people were prepared to believe that the King was serious about constitutional government and simply ignored him. More volunteers joined Garibaldi though the Neapolitan army still had some sizeable garrisons on the island. In July Garibaldi captured Milazzo with 5,000 men after the overall Neapolitan commander refused to reinforce the garrison there. His caution did him no good and a few days later he surrendered Messina to Garibaldi by which time it was the rebels who held a significant numerical advantage and the remaining garrisons surrendered quickly. Throwing caution to the wind (and alarming the government in Turin) Garibaldi wasted no time and transferred his forces over to the mainland at Calabria. After that, a string of victories ensued as many Neapolitan forces deserted, some even joining the red shirts and most of those who did offer resistance did so with little support or coordination. The army and navy seemed to melt away, King Francesco II fled Naples and made his last stand at Gaeta. 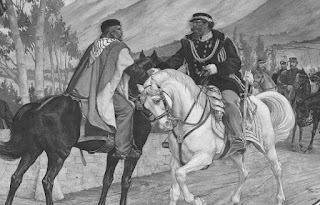 The Neapolitans were still able to slightly outnumber the forces of Garibaldi and might have defeated him, at least temporarily, were it not for the arrival of the Piedmontese army under King Vittorio Emanuele II who was alarmed at how fast and far the red shirts were advancing and just a little concerned about how genuine their newfound monarchist sympathy was. Between them, Gaeta was doomed (though it would hold out until early the following year) and at the bridge of Teano on October 26, 1860 General Garibaldi and King Vittorio Emanuele II met, bringing their forces together and joining, from that time ever since, the north and the south of Italy together for the first time since the days of the old Roman Empire. In March of 1861 the unified Kingdom of Italy was officially proclaimed. It was not something that either the new King of Italy or even his first minister Cavour had planned for in advance. Even his royal predecessor, King Carlo Alberto, had only ever had ambitions to unite northern Italy. However, just as in those days, the drive to end foreign rule and unite the Italian people was such that it became a race between the republicans of Mazzini and the monarchists of the King of Piedmont to see who would accomplish the act and establish the first real Italian government since Roman times. There was plenty of tragedy along the way, but between those two competing ideologies, it is fortunate that it was the King who reached the goal first.