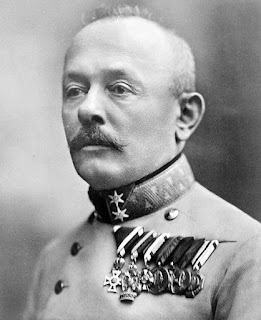 The military of Austria-Hungary often does not receive the respect it deserves despite having some excellent and hard fighting units as well as some very accomplished leaders. One of those was Svetozar Boroevic Baron von Bojna, the only officer of a Slavic background to attain the rank of field marshal in the imperial and royal army. He was born on December 13, 1856 in Umetic in what is now Croatia, the son of a local army officer, and was baptized in the Orthodox faith. Largely because of this he has often been described as being of the Serbian nationality though the Baron always identified himself as a Croat. From very early in life he was set on the path for a career in the military, attending his first cadet school at age 10 and afterwards studying at several military academies before but still worked his way up through the ranks. In 1872 he was a simple corporal but rose rapidly in rank to become a lieutenant in 1875, the same year he attended the officer-training school at Liebenau. Later he obtained a commission as an officer in the Croatian Home Guard, basically the Croatian militia. In 1889 he married Leontina von Rosner, who was herself from a military family, and who not long after gave birth to his only son (who sadly died in the last year of the Great War). The highest ranks in the army tended to be dominated (not surprisingly) by Austrians and Hungarians but Boroevic advanced himself by talent and a strong work ethic. 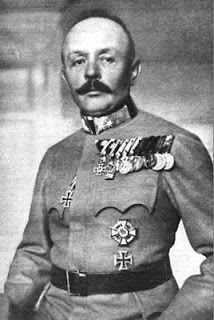 After being commissioned into the regular army he still held rank as the commander of the Croatian Home Guard 42nd Division until 1903 though he would later command many of the same troops when war broke out in 1914. A year later he was promoted to major general and in 1905 was raised to the Hungarian nobility, became a lieutenant field marshal in 1908 and in 1913 was promoted to General of Infantry. When the First World War began in 1914 von Bojna was commanding the VI Corps on the Russian front. He proved himself early in the fighting, taking command of the III Army the following month, liberating Przemysl (the fort, not the city) and later blocking a Russian advance on the Danube plain. Early in 1915, when the Russians launched a major offensive, his troops fought with great determination and skill, suffering considerable losses but managing to hold on long enough for German reinforcements to arrive and stabilize the front, saving Budapest and Pressburg from enemy occupation. These feats gained him more attention from the high command though, sadly, subsequent historians have tended to ignore these victories and hard-earned accomplishments on the part of the Austro-Hungarian forces. Baron von Bojna was highly decorated by the Emperor and participated in the early stages of the Gorlice-Tarnow offensive (another feat for which Austria-Hungary is given little of the credit they deserve) but was transferred out before most major gains were won.

It was in 1915 that the Kingdom of Italy joined the conflict, declaring war on Austria-Hungary, and the baron was given command of the V Army and bringing his usual skill and solid determination in defensive fighting. The Austrians had the terrain to their advantage (along with some other things) but as their forces were fighting on numerous fronts it was the Italians, who mostly had a single front to concentrate on, that held the numerical advantage and they hit the Austrian lines in a series of gallant, costly offensives. Baron von Bojna and his men took a devastating toll on the attacking Italians and while Austria-Hungary was usually forced to give ground, it was minimal and came at a disproportionate loss to the Italians and much of this was due to the tenacity of the baron and his forces. Eventually, however, as conditions inside Austria-Hungary became worse, the stress increasing on the forces on every front and the slow but continuous progress of the Italians, Field Marshal Conrad von Hoetzendorf, the chief of staff and a renowned strategist (despite what you may have heard) recommended that the imperial-royal forces on the Italian front fall back, abandoning most of what is now Slovenia, to a better defensive position that could be held with fewer troops. 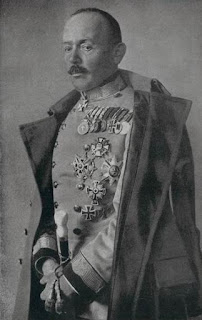 Baron von Bojna objected to this proposal and argued vociferously that he could hold his position and that the Slovenian troops in his command would fight even harder defending their own territory whereas, if Slovenia were abandoned, their morale might collapse. Later, this little showdown would be used by some to promote the image of Baron von Bojna at the expense of Count Conrad. However, to be fair, from a purely strategic point of view, the count was probably correct. Yet, it was the baron, directly commanding troops in the field, who could be expected to know the temper and abilities of his men more than someone sitting at a desk looking at this like numbers, logistics and topography. The count did have a point but the baron was correct in knowing what his men could do and the Emperor, pleased at his fighting spirit, raised him to command of the Italian front. Baron von Bojna showed that his was no idle boast as his men, even when often outnumbered, held off repeated attacks or at least restricted Italian offensives to minimal gains with heavy losses. As a result, he was praised and decorated even further and was greatly loved by his regular soldiers who saw that he was concerned for their welfare and not willing to waste their lives needlessly.

In 1916 the baron was promoted to Colonel General and later was given even wider authority as a commander who had tangible proof of his ability. In this context, it is also important to remember that he was a loyal soldier of his emperor and defender of Austria-Hungary as it then was. His background may have been a disadvantage at times, but it also made him something of an embodiment of Austria-Hungary itself in that (as would later be seen) it would have been hard to say there was one group to which he belonged; he was not German, not Magyar and a Serbian Orthodox Croatian seems almost a contradiction in terms, however, as long as the empire existed, none of that mattered because Austria-Hungary as a whole was his country, it was where he belonged and he would fight for it to the bitter end. That included actions away from the front such as his staunch opposition to an effort by some in the Hungarian government to split the military completely in two with an Austrian branch and a Hungarian branch. While others were exasperated by trying to keep Germans, Magyars, Slavs, Catholics, Protestants, Orthodox, Muslims and Jews from trying to break away, for Baron von Bojna it was enough that he was from one of the many Hapsburg lands and he was loyal to his monarch, simple as that. Of course, as with any of us mortals, he was not flawless. He was notoriously difficult to work with, being an extremely strict disciplinarian and was rather excessively vain; however, given his great talent one can certainly see why. Baron von Bojna performed extremely well on the Italian front, receiving further honors and finally promotion to the rank of General Field Marshal for his service. Yet, that was in 1918 and not long after, things began to come apart. Their worst defeat turned out to be something of a blessing in disguise for the Italians as it resulted in the whole population uniting firmly behind the war effort, gaining a more competent commander and a renewed zeal to see the Austrians driven from Italian soil. Still, Baron von Bojna held things together surprisingly well considering the circumstances and might have done so longer had it not been for the beginning of the break-up of the empire as the Hungarian government declared its separation from Austria and ordered all Hungarian troops to cease hostilities and return home. The front quickly collapsed and von Bojna was forced to fall back with his remaining forces with the Italians advancing rapidly and riots breaking out in Vienna. Ever faithful, the baron sent a message to Emperor Charles I offering to take those few but faithful troops still under his command and marching on Vienna to shoot down the rioters and restore order as well as power to the Hapsburg Crown.

Emperor Charles, of course, refused the offer, being a very pious and peace-loving man, and Austria-Hungary was no more. Minority populations declared their independence, the Imperial Family went into exile and the Hapsburg lands were divided up amongst the Allied powers with the most generous portions going to Romania and Serbia with a totally new country (Czechoslovakia) being created in the process. Without the empire, Baron von Bojna regarded himself, as he always had, as a Croatian and offered his services to the newly formed Kingdom of Serbs, Croats and Slovenes (under the Serbian monarchy which would later become the Kingdom of Yugoslavia) but was refused, even though one would think any power would have been grateful to accept the services of a commander of such proven ability. The baron then made his home in Austria and, sadly, was forced to live a very modest existence on a small pension, being denied employment in the one occupation to which he had devoted his life. Embittered by his treatment after a lifetime of loyal and remarkable service, the Slavic field marshal died of an apoplexy on May 23, 1920. Still, not everyone was ungrateful as, despite his own immense difficulties, the exiled Emperor Charles I paid for his burial and would no doubt have attended the services for this exceptional former soldier of his had the Austrian authorities allowed it. Still, his life is one which can or should inspire others. He was a gifted soldier, a loyal subject and a devoted monarchist.