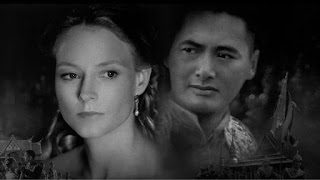 “Anna and the King” is a 1999 film directed by Andy Tennant and (very loosely) based on the 1944 novel “Anna and the King of Siam” about the relationship between the British tutor Anna Leonowens and HM King Mongkut of Siam (Thailand). The film stars Jodie Foster (as Anna) and Chow Yun-fat (as the King). The original plan had been to shoot it in Thailand but the government, after reviewing the script, refused to allow this and it was shot, instead, in neighboring Malaysia. It is a fairly entertaining movie and certainly a very beautiful looking piece but I can certainly understand the objections of the Thai government to it as it basically takes a very dubious piece of source material and runs wild with it and, as a result, comes off as very condescending toward the Kingdom of Thailand. People who get their history from movies would come away thinking that Thailand owes everything from each step of “social progress” to its very independence to a British schoolteacher who arrived to save everyone and show them the error of their ways. Of course, having said that, it is impossible to address this subject without just a word on the facts of the actual Anna Leonowens upon whose life this movie (and many other works of art on the page, stage and screen) was based on. 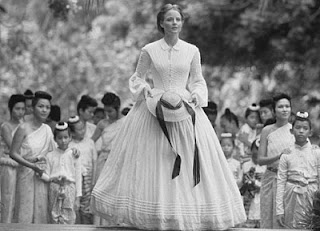 Anna Leonowens was, of course, a real woman, an English widow who arrived from India to take a job as tutor at the royal court in Bangkok on the sole condition that she would not include anything about Christianity in her lessons. She did do that job just as she was hired to do, however, in her own writings about her life in Siam she greatly exaggerated her influence and, frankly, made up a great many stories that have since been proven to be totally false. To hear the story as she told it, one would have the impression that she found Siam a backward and barbaric country and, by her own charm, intelligence and influence with the King, set the process into motion for turning the kingdom into a more humane and civilized country. In fact, she was, for the most part, simply a tutor and nothing more and did not have any sort of special relationship or influence on King Mongkut at all. In her own writings and the subsequent works based on them, including “Anna and the King” she would try to take credit for everything from ending slavery to promoting equal rights for women to saving the very independence of Siam itself. Rest assured that is nothing more than some pretty shameless self-promotion and has no basis in actual fact. That should be kept firmly in mind by anyone watching this movie; it is a work of fiction, it is not how things really happened, it’s just for entertainment.

So, to the movie, Anna, her son Louis and her Indian servants arrive in Siam to teach the royal children and immediately causes a stir by (gasp) standing upright in the presence of men and refusing to prostrate herself before the King. Fairly early on we also get the beginnings of the main conflict for the movie which is that the Burmese (a British possession) are colluding with the minister of war to launch a coup to overthrow King Mongkut with the aim of making the country a British colony (none of which actually happened in real life). We do get some liberal-progressive lines from Jodie Foster (and I say that as it sounds more like the words of a left-wing Hollywood actress than a daughter of the British Empire) scolding the Brits for thinking that one country or culture could be superior to another. That’s all fine and dandy except that it goes against her actions throughout most of the entire movie. She is the one, for example, who teaches the little crown prince (future King Chulalongkorn) that slavery is wrong by having him read the American novel “Uncle Tom’s Cabin”, to the displeasure of his father. It is Anna who arranges a reception for the British officials, getting everyone to dress in European clothes, eat with a knife and fork and to stop falling prostrate whenever the King comes into the room. It is Anna who stands up for the tragic Juliet-figure of Tuptim (Bai Ling) who is forced into the royal harem despite being in love with another man -which ends in tragedy. 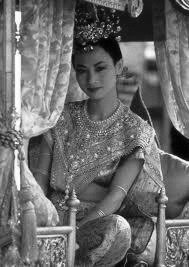 In the climax of the film, as the King goes out to meet a Burmese invasion force, it is also Anna who uses bugle calls and fireworks to frighten the enemy away just when they are on the cusp of victory. So, despite her earlier words, the movie is filled with examples of how it took the arrival of this English woman to show the Siamese the error of their ways and to adopt the customs and values of her own people. Given that, it is certainly not surprising (or at least shouldn’t be) that the Thai authorities refused to allow the film to be shown in their own country. Overall, it is pretty blatantly condescending, even if it does make the British look bad as well. In fact, almost every main character comes off in a rather poor light other than Anna herself who is not always successful (she couldn’t save Tuptim) but who is always “right” from the standpoint of the audience with modern liberal values. It becomes, at some points, rather absurd, particularly the ending, which makes the Southeast Asians, whether Burmese or Siamese, seem like particularly inept simpletons, easily fooled by the last-minute trickery of an English woman and her little boy. The film also makes Anna seem to be credited with all of the great works of the future reign of King Chulalongkorn the Great. He is a rather arrogant, petulant little brat when Anna first arrives but her firmness and instruction makes him a compassionate liberal who will one day abolish slavery in Siam when he becomes king. Such arrogance.

However, the film is also not without some positive elements. Jodie Foster and Chow Yun-fat are both acting pros and turn in great performances. It is beautifully shot and really succeeds in putting the viewer in the correct time and place. The palaces are gorgeous, the scenery is breathtaking and, for many people I think, the visuals alone would be worth the price of the rental (or however people are seeing movies these days). The King, although not always a “nice” guy is portrayed pretty positively and he is shown as a man who is genuinely struggling to do the right thing. There are also some fairly funny moments from time to time, such as the look the Indian servants silently exchange when Anna tells her son that “India is British Louis, that’s what being colonized is all about” or Louis, in their house surrounded by chanting Buddhist monks, says he feels like they’re living “in a beehive”. The sets, the costumes and the overall “look” of the movie was, to me, the strongest aspect of it and, as film is a visual medium, that goes a long way. It is no surprise that it received two Academy Award nominations for Art Direction and Costume Design but, overall, was not a very successful film, losing money domestically and only making a minor profit internationally. 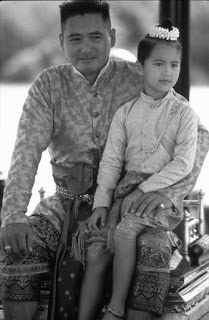 I cannot say enough good things about the “look” of this movie but, the problem is, that is about the only consistently good thing there is to say about it at all. The plot is not very clear, it doesn’t move along very well (seems to drag at times) and the level of condescension toward Thai history and culture is just crushing. The film could have been paced much better if it did not have to stop every few minutes to go off on another subplot so that Anna could teach the backward locals about everything from civil rights to gender equality. Of course, there was the usual controversy when it was banned in Thailand about “freedom of speech” but, honestly, I cannot imagine anyone in Thailand liking this movie if they have an ounce of national pride in them at all. There are, of course, worse movies to see from a monarchist perspective alone. There are no cheap-shots at the institution itself and the finger-wagging is all about cultures rather than governments; which is to say that Siam is shown as backward and the British are shown as meanies (aside from Anna of course). I could give it an unenthusiastic recommendation for the visuals but, on the whole, it is not one I would recommend just for itself.

Posted by MadMonarchist at 7:02 AM