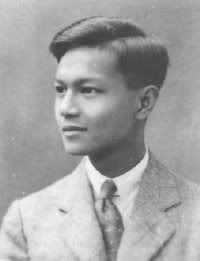 One of the more controversial and tragic royal figures of Malaysia in the last century was Sultan Ali Shah Ibni Sultan Sulaiman Badrul Alam Shah of Terengganu. He was born at Tepi Bukit, Kuala Terengganu on January 24, 1914 as the eldest son and heir of HH Sultan Sulaiman Badrul Alam Shah, Sultan and Yang di-Pertuan Besar of the State of Terengganu Dar al-Iman, the thirteenth sultan and his wife Tengku Ampuan Besar. He received the best education possible, attending the Sultan Sulaiman School in Kuala Terengganu, St Andrew’s School in Sussex, England and finally Oxford University, giving a balanced background of learning from the east and the west to prepare him for his future role as monarch. However, his future would be drastically different than what was expected because of the intervention of World War II. In December of 1941 the first Japanese forces landed in Malaysia and pushed back the defending British Indian Army. Under the command of Lieutenant General Tomoyuki Yamashita (later known as “the Tiger of Malaya) the Japanese forces pushed the British out of Malaysia in early 1942, the campaign culminating in the fall of Singapore in the largest surrender of British forces in history.

On September 25, 1942 HH Sultan Sulaiman died of blood poisoning and the Japanese military authorities oversaw the succession of his son Ali Shah as the Sultan of Terengganu. Later, much controversy was raised by his succession but when one cuts through all the legal nonsense there really is no reason for it. The situation was that the Japanese authorities had suspended the Council of Regency which was the body that was charged with proclaiming each new sultan according to the 1911 constitution. Because of that, Sultan Ali Shah was initially proclaimed “Regent” rather than monarch but later he was officially re-titled Sultan by the supreme Japanese commander in Malaysia. However, the bottom line is that, regardless of all the constitutional red tape, there was no denying that Sultan Ali Shah was the eldest son and heir of the previous monarch and fully entitled to succeed to the throne and had always been intended to do so. He was the legitimate heir and would have become Sultan of Terengganu just the same if the Japanese had never set foot in Malaysia and the British were still in charge.

At the time, however, with the inevitable difficulties of war, the reign of Sultan Ali Shah went forward with ‘business as usual’ as much as possible. The only major change came on October 18, 1943 when the administration of Terengganu was transferred, in name at least, to the Kingdom of Thailand. This was due to the treaty negotiated between the Empire of Japan and the Thai government of Marshal Plaek Pibulsonggram by which Thailand cooperated with the Japanese campaign in Southeast Asia in exchange for four border regions, including Terengganu, from Malaysia. This was, of course, significant, but it is possible to make too much of it. It was mostly a shifting of legal responsibility from the Japanese authorities to those of Thailand, however, in Terengganu very little changed. Japan and Thailand were both in agreement that Sultan Ali Shah was the legitimate monarch and he would continue to govern his own people to the same extent as he had before and it is not as though the area had been totally independent previously. In effect, it was simply that instead of the King of Malaysia (or even the King of Great Britain) the area would be under the jurisdiction of the King of Thailand.

Overall, the status of Malaysia was far from being decided. There were a number of influential people, for instance, who, in the event of a Japanese victory, wanted Malaysia and Brunei to be united with the former Dutch East Indies to create a massive “Greater Indonesia”. However, such speculations became irrelevant following the atomic bombing of Hiroshima and Nagasaki and the surrender of all Japanese forces. With that, the British colonial authorities returned to Malaysia and they were quick to take action against any Malaysians who has supported or actively or passively cooperated with the Japanese. As such, they refused to recognize Sultan Ali Shah as the legitimate monarch of Terengganu. It was clear almost immediately that the Sultan would be removed by the British but the reasons and justification for this would be the subject of no small amount of controversy.

On November 5, 1945 the 13-member State Council, with British backing, declared Sultan Ali Shah deposed and named Tengku Ismail as the new Sultan of Terengganu as Sultan Ismail Nasiruddin Shah though he was not formally enthroned until 1949. Officially, the British said this was because of the cooperation of Sultan Ali Shah with the Japanese. The British army also expressed their official disapproval of his divorce of his wife (the daughter of the Sultan of Abu Bakar of Pahang) and remarriage to a woman of dubious background. Rumors also spread of the debts and poor character of the Sultan, which he denounced as simply a campaign to blacken his reputation. It is true that not every royal who cooperated with the Japanese was so punished and Sultan Ali Shah always maintained that it was his refusal to sign the Malayan Union treaty that motivated the British to get rid of him. The legality of how he came to the throne during the Japanese occupation was also brought up, however, once again, this was a rather shaky justification given that there was no doubt that Ali Shah had always been the legitimate and designated heir of his father. However, little could be done as Britain was back in charge again and they clearly did not want Ali Shah on the throne. Nonetheless, he disputed his removal and continued to argue the injustice of the case for the rest of his life.

The former Sultan Ali Shah died on May 17, 1996 still insisting that he should have been the legitimate monarch. He had, in fact, outlived his replacement, Sultan Ismail Nasiruddin Shah, who died in 1979 (even serving a term as King of Malaysia) but it was his royal line which carried on and which continues to reign over Terengganu to this day.

Posted by MadMonarchist at 7:33 AM