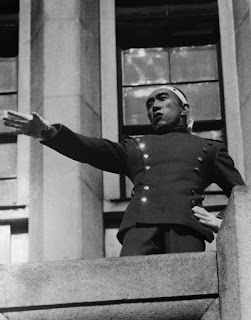 Today, most people remember Yukio Mishima as perhaps the most significant Japanese novelist of the last century. They remember his many, many written works, perhaps some of his dramatic photographs and usually something about his rather unusual demise; unusual in that it was done in keeping with an ancient tradition most thought had been consigned to the past. He remains a controversial figure, both for his own life and his political opinions which most separate from his writing which is almost universally praised. He was nominated for the Nobel Prize in Literature three times and was a prolific artist, producing forty novels, twenty books of essays, twenty books of short stories, eighteen plays, one libretto and one motion picture. That is all well known and widely celebrated. Perhaps less well known is the fact that he was a staunch monarchist though in a way very unique to his own culture and background and he held to a style of monarchism that was bound up in his artistic view of beauty and the timeless, sacred aspects of existence that mankind cannot fully grasp, and would only destroy if he tried. He was a complex individual but his priorities can be clearly seen in the manner in which he exited this life, calling for a full restoration of the Emperor in the traditional style. 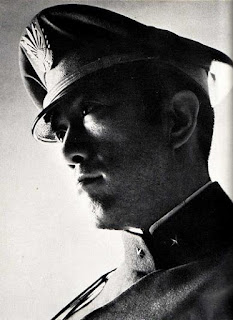 Yukio Mishima was born on January 14, 1925 in Kimitake Hiraoka, outside Tokyo to a mid-level government employee. He was largely raised by his grandmother, however, who had a profound impact on his life. She influenced his love of theatrics and also his appreciation for the traditional and aristocratic values of old Japan as she had grown up in the household of Prince Arisugawa Taruhito. She also would not allow him to indulge in most recreational activities for boys, fearing he would get hurt, and his father finally took him back for fear that he was being surrounded by too many feminine influences. In school he began writing and studying the styles of noted authors from both Japan and abroad, though he often had to do so secretly as his father disapproved of such a pastime. He began writing poetry and had his first short stories published in a school magazine. His teachers encouraged him and also gave him the nom-de-plume “Yukio Mishima” so that he could pursue his talent anonymously and avoid any unpleasantness from his father or the other boys in school. During World War II he received his draft notice for the Imperial Army but was sick at the time of his physical examination and was rejected. Instead, he went to the University of Tokyo and continued writing in his spare time.

After graduation his first job was with the Ministry of Finance but he found it frustrating and exhausting and soon quit to focus on his literary career. His work began to gain notice, soon around the world and by the age of 24 he had received his first nomination for the Nobel Prize and was able to travel around the world. His literary work is not our focus here but there are some common themes throughout which illustrate his broader world view. His conception of beauty is one such theme. In “Spring Snow”, for example, he wrote, “Dreams, memories, the sacred--they are all alike in that they are beyond our grasp. Once we are even marginally separated from what we can touch, the object is sanctified; it acquires the beauty of the unattainable, the quality of the miraculous. Everything, really, has this quality of sacredness, but we can desecrate it at a touch. How strange man is! His touch defiles and yet he contains the source of miracles.” He often wrote of perfect beauty as a terrible, destructive force, though not always in the negative way most would assume. As he grew older he also became rather frustrated at the young people around him and their disconnect from the values and culture of their own past. In “After the Banquet” he wrote, “Young people get the foolish idea that what is new for them must be new for everybody else too. No matter how unconventional they get, they’re just repeating what others before them have done.” 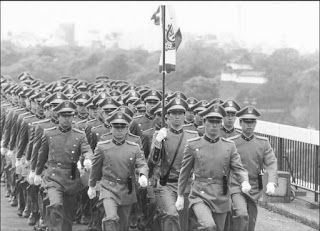 As many fans as he gained by his writing, Yukio Mishima began to attract criticism for his political views. He joined the Japanese Ground Self-Defense Force and began calling for constitutional reform in Japan, the restoration of the military, a stronger foreign policy and a return to a righteous nationalism focused on the Emperor as the living embodiment of the country. This did not mean that he agreed with everything the actual Emperor did and once stated that the Showa Emperor should have abdicated rather than give in to the demands of the United States that he renounce his traditional position in Japanese life. As controversial as these views were to some, he was allowed to form his own paramilitary force, Tatenokai or the “Shield Society”, recruited mostly from among college students and which was given special permission to train with the Ground Self-Defense Force. He married during this time and had a daughter, never losing touch with his artistic interests but becoming ever more known for his emphasis on physical fitness, the martial arts and the bushido code of the Samurai; something which had rather fallen out of favor after the war. Simultaneously, in the 60’s he worked as a model and began appearing in motion pictures.

Mishima was very alarmed by the growing leftist and communist movement in the universities of his time, which sought to destroy the traditional Japanese spirit (as they do all such national traditions everywhere) and he did not shy away from stating that the war in Manchuria in the 30’s was an example of how actively anti-communist Japan had been. He deplored how outside influences in the culture were overriding traditional values, ideals and even works of art but he was never a simple reactionary but rather favored a fusion of the old and the new in a way that could be seen as very in keeping with what Japan had been through in the past. Mishima wanted a return of, if not the warrior spirit as it had been before the war, at least a proper respect and appreciation for it as he felt like the denial of this by the post-war pacifists was not only harmful but not even genuine. He greatly admired the old samurai image of the warrior that was, at once, brutal and elegant. Heads were also turned when he spoke with admiration of the old custom of ritual suicide of hara-kiri or seppuku and said rather dejectedly that there was no such thing as a heroic death in the world anymore. 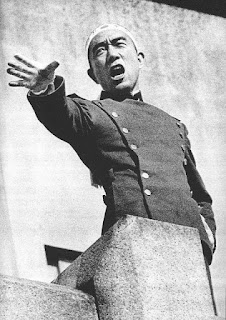 The final act in the life of Yukio Mishima was surely the most outlandish. Overall, the official intent was to stage a sort of military coup that would restore the Emperor to power. However, there has always been a debate over whether Mishima actually believed there was even the slightest chance of this working or, as seems more likely, it was simply a dramatic gesture that would allow him to end his life on his own terms for the cause he believed in. On November 25, 1970 Yukio Mishima and four other members of the Shield Society entered the headquarters of the Eastern Command of the Self-Defense Force, Ichigaya Camp, in Tokyo. They tied up the commander in his office, presented the manifesto of their political beliefs and Mishima came out on the balcony, making a rousing speech to the troops gathered below. He called upon them to rise up and overthrow the government and restore the Emperor but he was met only with jeers and mockery. After delivering his speech, Mishima went back inside and performed the traditional ritual of seppuku. The ineptitude of his second made it a rather ugly affair but all was carried out and Mishima had left special provision for the legal defense of those who remained. It was a traditional and dramatic end to the life of a man who had been both of those things.

Posted by MadMonarchist at 1:29 AM