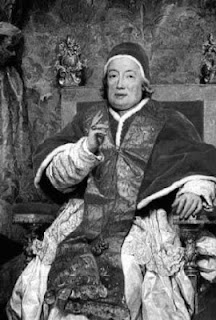 Pope Clement XIII is another of the often-overlooked Pontiffs, coming at a time when the papacy had becoming increasingly irrelevant in the political arena of Europe and just before the reign of the oft-derided Clement XIV. However, everyone who is a fan of the Jesuits and criticizes Clement XIV for their suppression should show equal zeal in praising his predecessor Clement XIII for his stalwart defense of the order. He was born on March 7, 1693 as Carlo della Torre Rezzonico to a well-to-do family of merchants from the Republic of Venice. He entered the Church and worked his way up through the ranks, serving as Bishop of Padua before being accorded the status of cardinal priest which included him in the conclave of 1758 to choose a new Pontiff following the death of Pope Benedict XIV. He had conceded a great deal of political muscle to restore good relations with the major Catholic powers of Europe but still managed to alienate many of the same, particularly Austria, so there was some lingering acrimony when the time came for the next election and, indeed, the cardinal priest from Venice was not the first choice. That man, however, was vetoed by the Kingdom of France and so Torre Rezzonico was chosen next as a compromise candidate, being elected on July 6, 1758 at the age of 65 and taking the name of Pope Clement XIII. 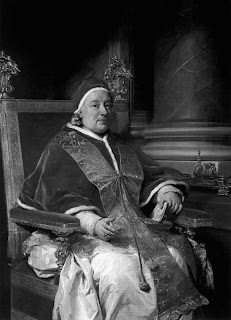 Whereas his immediate predecessor had been somewhat critical of the Society of Jesus, reprimanding some of them to stick to spiritual matters and stay out of politics, the Jesuits found a devoted champion in the person of Pope Clement XIII. It was an issue that came quickly to the forefront as within two months of his election King Joseph I of Portugal banished all members of the society from his kingdom on the belief that they had been behind an attempt on his life. Of course, as was common in these cases, more than the King it was his first minister, the Marquis of Pombal, who was most forceful in having the Jesuits expelled and they were gathered up from across Portugal, crammed onto ships and then dropped off at Civitavecchia (the main port of the Papal States) with the sarcastic quip that these were a “gift” for the Pontiff. Clement XIII, of course, protested this action and in retaliation the Papal nuncio was sent packing from Portugal as well, the Portuguese ambassador in Rome was recalled and diplomatic relations were effectively broken off between the Holy See and the Kingdom of Portugal, one of the most devotedly Catholic countries in the world. It was a terrible state of affairs by any measure.

In reaction to the outrage over this, pamphlets were printed up and spread around accusing the Jesuits of all sorts of misdeeds, particularly of being cruel to the natives of South America where they were accused of trying to set up their own little fiefdom on the backs of the natives. All of this was, needless to say, totally false as it was the liberal officials of the so-called “Enlightenment” who were actually the ones enslaving the South American natives whereas the Jesuits had educated them, taught them valuable skills and had mostly made their lives a great deal better. Unfortunately, it was the “Enlightened” class which had the money and the motivation to spread their version of events and so it was the story that came to be the most widely believed. This increasing anti-Jesuit hysteria was then seized upon in the Kingdom of France and the order was banished from that country as well later in 1764. Again, however, it was not really because of anything the Jesuits had done but was more due to the spread of Jansenism in France which Pope Clement XIII (and others on the Throne of St Peter) had been trying to combat. The Pope vociferously defended the Society of Jesus from these increasing attacks but few seemed to be listening. 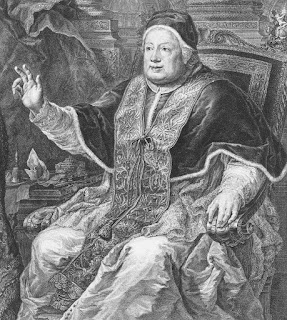 Next it was the Kingdom of Spain which began to eye the order suspiciously as King Carlos III began to fear that the Society of Jesus was out to depose him, a paranoia no doubt encouraged by the “Enlightened” faction at court. On April 2, 1767 the King of Spain had some 6,000 Jesuits hurriedly arrested and likewise shipped to Italy where most ended up in misery as the Papal States simply did not have the resource to keep dealing with these huge shipments of people. And it did not stop there as Naples and Parma next expelled the Jesuits, some of whom attempted to settle on the island of Corsica but they were soon driven out of there as well and most, invariably, ended up on the doorstep of the Pope. Here again though it was not so much the monarch (the Duke of Parma) that was behind it all as it was his liberal “Enlightened” minister Guillaume du Tillot.

This led to a breach between Parma and the Papal States which the “Enlightened” class in France was quick to take advantage of by grabbing such papal territories as Avignon, Benevento and Pontecorvo. Pope Clement XIII was in an impossible position with almost all of the major Catholic powers aligned against him over his defense of the Society of Jesus. The Kingdoms of Portugal, Spain and France all wanted the order dissolved and when the Austrian Empire (nominally the Holy Roman Empire of Germany still) agreed to go along with the push there was very little the Pope could do but agree to at least discuss the matter. In both word and letter he had spent most of his reign arguing the case for the Society of Jesus, defending them from attack and protesting their treatment. However, given the state of Europe at the time, if Portugal, Spain, France, Austria and their Italian satellites united in their opposition to the Jesuits, he could hardly afford to defy them all. So, in 1769 Pope Clement XIII very reluctantly agreed to call a consistory to address the matter, however, he did not live to see it happen as he died not long after on February 2 of that year. It is hardly surprising that the anti-Jesuit faction immediately declared that he had been poisoned by the order for moving against them. Not surprising, but no less silly. It would be impossible to believe that after ten years of defending the order Clement XIII would have just given in and thrown them to the wolves and no evidence of any wrongdoing was ever found. The Pope was 75 years old which was, at that time, a ripe old age. His death was due to nothing more sinister than a heart attack. 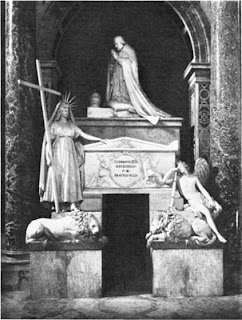 An important thing to remember about Pope Clement XIII and his struggles on behalf of the Society of Jesus is the historical context of it all. Undoubtedly there were Jesuits who were guilty of one thing or another, the law of averages would demand that such would be the case. However, there is not and never was any concrete evidence of massive wrongdoing as was being alleged. The important thing is to look at who were making the accusations; not the monarchs but the liberal ministers of the “Enlightenment” crowd. These were the group of people who represented a new way of thinking that was profoundly arrogant, that tended to regard religion in general as superstitious nonsense and it was this same way of thinking that would, in the not too distant future, lead to the outbreak of the French Revolution, the upheaval of Europe and really what was the practical end of Christendom. In defending the Jesuits, Pope Clement XIII was not simply defending one religious order but also fighting to prevent that calamity from befalling humanity.