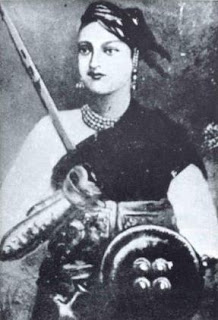 Although little known outside of India, Lakshmibai, Rani (or Queen) of Jhansi was one of the leading figures in the Indian Mutiny of 1857, aka the First Indian War of Independence or the Sepoy Rebellion. She was born Manikarnika on November 19, 1828 in Kasi (Varanasi) into a family of the Brahmin class. Originally known as Manu, she was only four years old when her mother died and her upbringing was left solely to her father. Perhaps as a result of that she was trained in horsemanship, shooting and swordsmanship as well as the usual scholarly subjects of a traditional education. It was a system she would maintain all throughout her life. In 1842 she was married to Gangadhar Rao the Maharaja of Jhansi and became known officially as Maharani Laksmi Bai of Jhansi. In 1851 she gave birth to a son but, sadly, the baby died within three months. After this tragedy, the royal couple adopted a child but ran into trouble with the growing influence of the British in India who did not recognize the adoptee as a legitimate heir. Not surprisingly, this did not incline the Rani to have very positive feelings about the British East India Company, yet it never rose to the level of prejudice. Still, she remained wary of the growing British influence throughout the neighboring states of India. 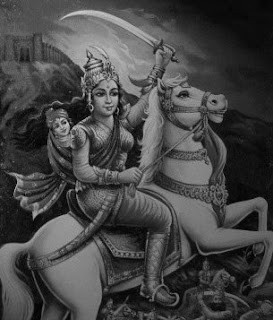 Not long after, on November 21, 1853, the Maharaja died leaving Rani Lakshmibai a widow at the age of 18. It was then up to her to defend Jhansi alone but she proved more than up to the task and rejected all offers the British made to her. Yet, over time, as with all the other states one by one, Jhansi did come, effectively, under British control. After the death of the Maharaja the British East India Company did not recognize his adopted son as the new monarch and annexed Jhansi to their territories. The Rani was given a pension and ordered to leave her palace. Yet, Rani Lakshmibai did not change her strict daily routine though, which included regular religious observances, martial arts practice and charitable giving to the poor. She accepted things she could not change and determined to continue forward and live as she always had. Despite her difficulties with the Company, when the mutiny of 1857 broke out there was no certainty about what Rani Lakshmibai would do. Certainly she sympathized with the idea of Indian self-rule but not all of the rebel forces were in agreement or had the same aims and motives in mind.

The Rani was not anxious for trouble and had no desire to see bloodshed in her country but all the same she came to be viewed as an enemy of the British early on after a group of mutineers massacred those at a British post, including the women and children, for which the Rani was assumed to be responsible (though this was a mistaken assumption as she actually had nothing to do with it). Further complicating things was the fact that some of the mutineers tried to take advantage of the war to seize control of Jhansi for themselves. This was not an uncommon problem in the course of this early conflict which had begun spontaneously with no central leader or strategy. However, Rani Lakshmibai was able to overcome them, Jhansi was won back and the Rani restored it to some of its former glory and even assembled an army of women warriors to fight alongside the male army. Given that, it should not be considered shocking that she had first presented herself as an ally of the British because of how the rebels had treated her and her country but the British rejected her hand of friendship due to the misplaced blame placed on her for the earlier massacre. 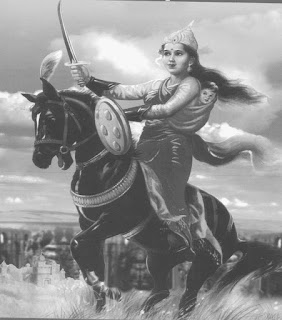 In 1858 a powerful British force under Sir Hugh Rose marched on Jhansi and demanded the Rani surrender, promising total destruction if he was refused. Rani Lakshmibai famously replied,
“We fight for independence. In the words of Lord Krishna, we will if we are victorious, enjoy the fruits of victory, if defeated and killed on the field of battle, we shall surely earn eternal glory and salvation”. Enduring a siege, bombardment and final attack, she and her forces offered heroic and determined resistance to the British onslaught before the fight became clearly hopeless. As her forces were being overrun the Rani finally determined that she would have to escape the palace and attempt to join with other rebel groups to continue the struggle. Wearing a disguise, she took her son and a few guards and slipped out on horseback in a harrowing escape. She managed to find other compatriots and they made their next stand at Kalpi where the Rani again played a leading role in the defense of the place before again being overcome by the attacking British army. Still, once again, she and the other leaders managed to escape again and regrouped at Gwalior. However, while the other leaders concerned themselves with politics they ignored the urging of Rani Lakshmibai to prepare to defend the place from the inexorable advance of the British. Finally determined to leave the area, the Rani was in the process of leaving when the British caught up with her, including the cavalry of the Eighth King‘s Royal Irish Hussars. She dressed as a sowar and charged the enemy, going down fighting on June 18, 1858.

Posted by MadMonarchist at 6:26 AM