The Queenship of Mary 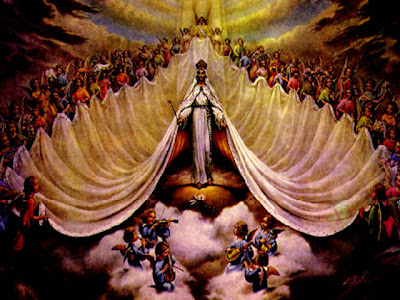 Yesterday was the Feast of the Queenship of Mary (in the Catholic Church) and having posted previously about the Kingship of Christ, I wanted to address this holiday as well, though to have time to I had to put it off for a day. Like many things in Christianity, the idea of the Blessed Virgin Mary as Queen is often regarded as modern but is actually quite ancient. Many mistakenly believe that the devotion dates only to 1954 with an encyclical by HH Pope Pius XII. However, it actually goes back to the earliest days of Christianity with the Council of Ephesus (431 AD) in which the Blessed Virgin Mary was declared “theotokos”, in Greek, or “Mater Dei” in Latin, the ‘Mother of God’. Because of this it was only natural to recognize her as a Queen (Queen of Heaven, Queen of the Angels etc, the titles are numerous) in keeping with the traditions that go back to the Old Testament when it was the mother of the King, not the wife of whom there were at times many, who was given the most respect and reverence of anyone after the King himself. So, as Jesus Christ is universal King, the Blessed Virgin Mary has long been recognized as Queen, in a way the “Queen Mother” of Christianity.

This is very significant in a cultural sense as well, in addition to religious, for western civilization. A Turkish ambassador, visiting Vienna for the first time to represent the Sultan at the court of the Emperor of Austria (still nominally the Holy Roman Emperor at that time) was most surprised by the deference that even the Emperor showed to ladies walking down the street; pausing to let them pass in front of him. This type of gallantry was unknown in Muslim countries and it was the ambassador himself who reasoned that this must have grown out of the level of devotion Christians attached to the Blessed Virgin. Because the Holy Mother was regarded as the Queen of Heaven, the most pure, the most perfect, living vessel of God on earth, this had the effect of making Christian men take a more chivalrous attitude toward all women which was remarked upon even centuries ago when most modern feminists think women lived absolutely horrible lives. Yet, contemporaries did not think so, compared to other cultures and, if anything, it seemed to the casual observer that, in Europe, there was a rather idealized and romanticized view of women and their place in society.

Around the world, numerous cities and countries have adopted the Holy Mother as their Queen. Examples include Siena, Massa Marittima, San Gimignano, Poland, Bavaria, Ireland and others. In Portugal King John IV declared Our Lady of the Immaculate Conception the “Real Queen of Portugal” and even in countries on the other side of the world, where Christianity has always been a minority, such as in China, images of the Virgin Mary can be found in which she is portrayed in the style of a Ming or Qing era Empress. Similarly, Our Lady of Lavang, the most significant Vietnamese Marian apparition is sometimes referred to as “Empress of Vietnam”. The Blessed Virgin, in various images, has been called upon, not always as a royalist symbol, but as a symbol for royalists, and of course mostly Catholic royalists. Before there was much fuss about republicanism this occurred in the religious wars that shook Europe after the birth and spread of Protestantism. One of the more famous examples was in England where Catholics were devoted to the Virgin Queen in Heaven (Our Lady of Walsingham or others) while Protestants were devoted to their own “Virgin Queen”, Elizabeth I, in London. Both sides were royalist but each supported a different “Virgin Queen”.

One of the more unusual cases, which involved Catholic royalists fighting Catholic republicans (and some Catholic royalists fighting other royalists) with competing Holy Virgins was in the War for Independence in Mexico. Since the time of Padre Hidalgo the rebel forces had adopted the image of Our Lady of Guadalupe as their symbol, their Queen and generalissima. On the other side Spanish royalists adopted the image of the Virgin de Los Remedios, a devotion dating back to the original Spanish conquest of Mexico, as their own special patron, divine intercessor and official protector of the Spanish army (even dressing the image in a military uniform). However, as we know, the forces of independence prevailed and the image of Our Lady of Guadalupe was honored by the monarchists of the Mexican Empire as it was by the revolutionaries who supported a republic. And, of course, the Virgin Mary was an important and ever-present symbol among the royalist counterrevolutionaries in the struggles in France, Spain and elsewhere. Even today, one would be hard pressed to find any element of Catholic monarchists who do not have a devotion to the Queen of Heaven.

Posted by MadMonarchist at 1:07 AM