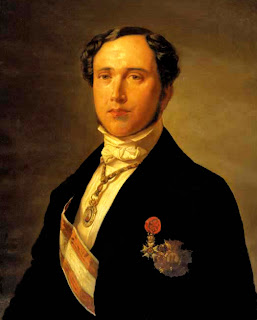 Amongst almost any listing of the giants of counterrevolutionary, monarchist thinking will be the name of Don Juan Donoso Cortés, marqués de Valdegamas, something of a convert to the movement and a descendant of the great Spanish conquistador Hernando Cortés. He was born in Valle de la Serena, Extremadura, in the Kingdom of Spain on May 6, 1809. Something of a child prodigy he was more learned than most adults at the age of ten and was studying law at the University of Salamanca when he was only twelve. He graduated from the University of Seville at sixteen and was a professor of literature at the College of Carceres by the time he was eighteen. However, like many young men experiencing the world through university he became something of a political liberal, embracing the tenets of the so-called Enlightenment. The French had invaded Spain by this time and this may have been a factor in his embracing of certain ideas from beyond the Pyrenees. Jean-Jacques Rousseau was the philosopher he admired most.

Eventually, he entered the world of politics under the wing of the noted liberal Manuel Jose Quintana. However, his faith in liberalism was somewhat shattered when real life began to intrude when a liberal uprising threatened the monarchy and even the very life of King Fernando VII at La Granja. If this was the fruit of the political beliefs he had held then he would hold them no more. Cortés became more and more counter-revolutionary and certainly a more ardent monarchist after being appointed private secretary to Queen Maria Cristina, regent of Spain for her daughter Queen Isabella II after the death of the King. He began to write extensively on both politics and religion (which were indelibly linked as he saw it) and was spurred on by Louis Veuillot to write probably his most famous book, Essays on Catholicism, Liberalism and Socialism by the revulsion he felt for the 1848 Revolution in France. The book was published in 1851 and made Cortés famous as a religious as well as political conservative.

The book still holds up today as one of the great Catholic, monarchist denunciations of socialism. Cortés took a rather unique approach by condemning socialism, not as a political ideology that was flawed, but rather as a sort of religion, with a theology all its own, and an inherently Satanic and poisonous religion at that. He became quite famous in his time for his writings and his fiery speeches denouncing the creeping spread of socialism and revolutionary republicanism. In fact, he was often quite prophetic, correctly predicting that socialist revolution would bring down the Russian Empire first at a time when the Romanov dynasty seemed as powerful and permanent as the stars in the sky. In fact, he was rather pessimistic and even in his own time felt it was most likely too late to stop western civilization from rushing headlong to its own destruction. Absolute, legitimate authority was essential, in his view, and in his time, he complained that there were no monarchs left who dared to rule without the permission and approval of the masses.

It was a style of absolute monarchy that Cortés advocated, just as in the spiritual realm he was an early advocate of Papal infallibility. Without absolute authority, he warned, the monarch, the sovereign, would lose his sovereignty and the people, filled with the promise of the wealth of others by socialist agitators, would overwhelm the legitimate monarchs and set up popular tyrants who would be totally under the thumb of Satan himself. To stop this, no measures could be off-limits and if it took a Crown dictator to maintain order and keep the revolutionaries in check, so be it according to Donoso. He held out hope that at least one of the more authoritarian constitutional monarchies might save the situation if only the ruling monarch would dare to be so bold. However, after the Revolutions of 1848, most of the monarchs across Europe had adopted a firmly defensive posture and had no taste to take risks if immediate peace and security could be gained by compromise.

Donoso was a very gifted writer, aside from his political brilliance and foresight, and he was admired even by many of his political and philosophical enemies during his time. Yet, after his death his memory seems to have faded rather quickly and today is little known outside of monarchist and counter-revolutionary circles. His death came on May 3, 1853 in Paris where he was serving as ambassador, just short of his 44th birthday. He had previously served as ambassador to Berlin. He certainly deserves to be more well known than he is today. He was a deeply religious man, as staunch a Catholic as one could ever hope to find, an ardent defender of Papal supremacy and infallibility and a man of gifted foresight. He predicted that Prussia would be the power to unite Germany, that the morale decline in France after the fall of the monarchy would result in the loss of Alsace-Lorraine and that Imperial Russia would fall victim to Marxist revolutionaries. Few men have ever seen the world more clearly than he did or better understand the dangers of revolutionary liberalism which he called the, “sterile and disastrous ideas in which are comprehended all the errors of the past three centuries, intended to disturb and disrupt human society”. How very right he was.
Posted by MadMonarchist at 12:13 AM