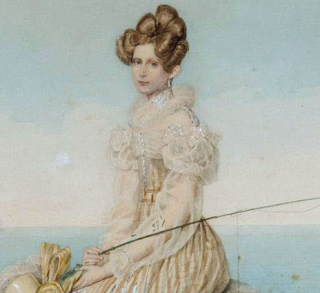 It is pleasing to note that one of my favorite monarchs had one of the most ideal consorts beside him and that woman was Charlotte of Prussia, also known as Empress Alexandra Feodorovna of Russia. She was born HRH Princess Frederica Louise Charlotte Wilhelmina of Prussia on July 13, 1798 at Charlottenburg Palace in Berlin to King Friedrich Wilhelm III and Queen Louise of Mecklenburg-Strelitz. Her first experience with Russia came early in life thanks to the invasion of Prussia by the French under Napoleon Bonaparte when the Hohenzollern family fled Berlin for the relative safety of East Prussia and were graciously protected by HM Tsar Alexander I. She knew a great deal of hardship because of the war and had a special affection and admiration for her heroic mother who died when she was only twelve years old. As the eldest daughter she then became the “First Lady” of the Kingdom of Prussia, taking the place of her mother, and she never forgot the strength of her mother and her ardent Prussian patriotism.

In 1814 Grand Duke Nicholas Pavlovich of Russia first visited Berlin and the Romanov and Hohenzollern houses immediately began to arrange a marriage between the dashing Russian prince and the petite Prussian princess. When the Grand Duke returned in 1815 he happily fell in love with the beautiful seventeen year old princess and she with him. As the Princess said to her brother, “in our hearts we have a world of our own”. Throughout the tour the two were totally inseparable and by the end of the trip the Grand Duke had proposed and Princess Charlotte accepted though it would be a long engagement. She was nineteen when Charlotte and the Grand Duke Nicholas were married in 1817 at the chapel in the Winter Palace in St Petersburg. It was the start of a great romance as Princess Charlotte, renamed the Grand Duchess Alexandra Feodorovna after her conversion to Russian Orthodoxy said, “With complete confidence and trust, I gave my life into the hands of my Nicholas, and he never once betrayed it”. 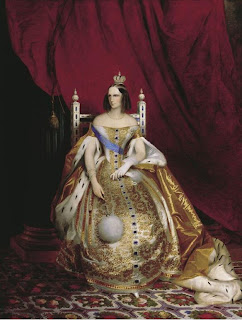 There were problems of course. Charlotte was a devout girl and changing her church was not easy and, although she won over many right away, some were also opposed to her from the very start and would remain so. The massive, sprawling, ramshackle Russian Empire was also quite a change in environment from the compact and clockwork efficient Kingdom of Prussia. However, Nicholas got along very well with her family, having nothing but the greatest respect for the Prussian kings and their famous army and he was a devoted husband. He loved the simple, quiet and affectionate home that Charlotte made for him and throughout his life Charlotte was always his closest advisor and confidant. Twenty years into their marriage Nicholas was still writing his wife, whom he affectionately nicknamed “Mouffy” that, “rest, happiness, joy, calm -- that is what I seek and find in my old Mouffy. I wished, as much as this was in my power, to make you a hundred times happier, if I could have divined how this end could have been obtained”.

Only a few weeks after the wedding Grand Duchess Alexandra was pregnant and gave birth to a son (the future Tsar Alexander II) in 1818. Six more children came in fairly quick succession in the ensuing years, though the petite Grand Duchess sometimes had trouble and did have a miscarriage in 1820. She was curious, graceful, musically inclined, an avid reader, rather soft-spoken but still authoritative and although frequently in frail health still maintained an always regal bearing. Whether in private or in public she was the ideal royal consort. She had her own interests but her family, her husband and children, always came first and she was happiest with them. Nicholas was happy and content as well, being utterly satisfied with his career in the Imperial Russian Army and with a loving wife at home he positively worshipped. However, they would not have as much time to themselves as they would have liked after the Grand Duke, rather unexpectedly, was propelled onto the Russian throne as Tsar Nicholas I. It was 1825, the Decembrist Revolt had just been suppressed and Nicholas set out on a reign that it was to make him known as the “Gendarme of Europe”, faithful protector of monarchial stability. 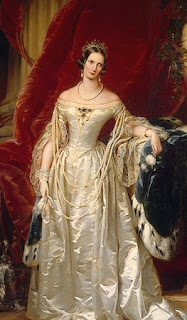 The now Empress Alexandra continued to devote herself to her husband and children as she always had. However, though Nicholas traveled extensively across his vast empire; so much so that at times he seemed on a quest to visit every Russian village no matter how insignificant, his Empress could seldom accompany him due to her fragile health. She became increasingly thin and suffered from a series of heart-attacks. Trips abroad to warmer climates were prescribed and Nicholas did consent to her staying for a time in Sicily but hated being apart from her. The doctors finally ruled that, due to her frail condition, she could no longer perform her marital duties. It was only then, in the 1840’s that the solid fidelity of Nicholas I slipped and he took a mistress. The Empress was, of course, very grieved by this, but eventually came to accept the situation and comforted herself with the knowledge that she was always beloved wife, Empress, advisor and confidant in a way that no mistress ever was or could be. During the Crimean War, after catching cold at a wedding reception for a courtier, Tsar Nicholas I died on March 2, 1855, passing from this life with his beloved wife and eldest son holding his hands.

Empress Alexandra remained devoted to her husband for the rest of her life, though she was greatly troubled by her fragile health which forced her to spend a great deal of time outside of Russia. This was hard as she had completely adopted Russia as her own (to her, the Tsar and Russia were one and the same) and she always referred to Russia, not Germany, as her country. When her health continued to deteriorate her doctors warned her that the Russian winter would be the death of her and she would have to move south permanently she decided instead to move to St Petersburg for fear that she might succumb while in a foreign country and she was determined to die on Russian soil. She spent her remaining time at the Alexander Palace and died there, in her sleep, on November 1, 1860. Just before she had closed her eyes for the last time attendants heard her say, “Niki, I am coming to you”.
Posted by MadMonarchist at 12:22 AM