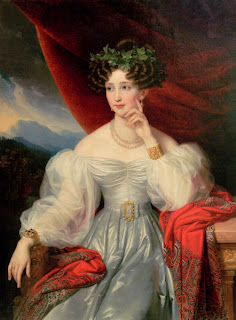 Princess Sophie of Bavaria, later Archduchess of Austria, is another one of those royal women who have been burdened with a very distorted popular image. Despite the fact that she was the mother of two emperors on two continents, thanks to Hollywood and certain pop history portrayals her image these days has been reduced solely to that of an over-bearing mother-in-law; all too often the “villain” in stories about the more beloved Empress Sissi of Austria-Hungary. I think this is quite unfair and, while she was imperfect as all mortals are bound to be, my view is that she was a much more admirable figure than she is often given credit for. Her son, Emperor Francis Joseph of Austria-Hungary, is often remembered for his devotion to duty. Much of that, perhaps most of that, should be credited to his mother, Princess Sophie, who was nothing if not totally committed to her duty; her duty to her family, the monarchy and the Hapsburg empire she married into. 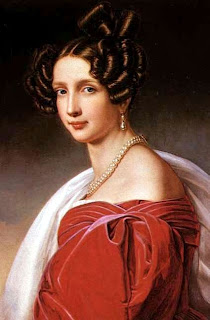 HRH Princess Sophie Friederike Dorothee Wilhelmine of Bavaria was born on January 27, 1805 along with her twin sister Princess Maria Anna (future Queen of Saxony) to King Maximilian I Joseph of Bavaria and Queen Karoline of Baden. Contrary to the popular image of her as a cold and scheming woman, those who knew her throughout her youth attested to the very opposite. She was always known as a strong woman, even when very young, determined, intelligent and passionate. When she learned that her parents had arranged for her to marry the Austrian Archduke Francis Charles she was originally furious and referred to him as an “imbecile”. However, she was a princess who knew that royals lived lives of duty and as Austria was the strongest neighbor of Bavaria, marriage ties and good relations were essential so she put her best foot forward. On November 4, 1824 she married the Archduke, tolerating his odd habits and giving him six children.

It is rather humorous, in a way, that a woman so often accused of being cold and calculating is, usually in other accounts, also accused of having an affair with the un-crowned “Emperor of the French” Napoleon II. There is, of course, no evidence that there was ever an affair, but the two were close friends and were known to laugh and joke for hours -an image not often associated with Sophie. She was the only one with whom the young man could openly talk about his father and Sophie even encouraged him to look up to the “Little Corporal” from Corsica. She reassured the frustrated young man that he would rule France one day, though of course that was not to be. Sophie was most concerned with the Austrian throne of course, particularly after the birth of her first child, Francis Joseph, in 1830. With her husband unassuming and un-ambitious and Emperor Ferdinand I rather handicapped it was clear to Sophie right away that her son would sooner or later be Emperor of Austria, and that could not be soon enough for her. 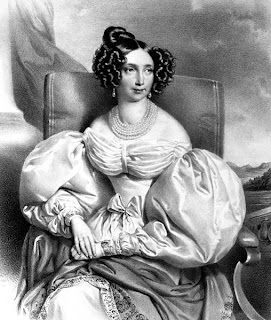 This is often cited as evidence of Sophie having a scheming mind, anxious for power, but that is simply putting a very negative spin on the existing facts. Emperor Ferdinand I was handicapped and her husband really didn’t have any desire to rule and with radical forces growing ever stronger the Austrian Empire needed a strong, vigorous monarch. For Sophie, this was not self-serving ambition, this was simply common sense. Someone in the House of Hapsburg had to be on guard, with an eye to the future, and Sophie was perhaps the only one up to the task. One thing most do remember her for was being known as “the only man at court”. Even the formidable Prince Metternich recognized her as his only intellectual equal at the palace. In another example of her strength, and putting reality ahead of emotion, Sophie actually despised Prince Metternich but still enlisted him to tutor her son in statecraft, recognizing that, despite her personal feelings, he was the best man for the job. However, Sophie could hardly have had much time for conspiracies as she was kept pretty busy with pregnancy. In 1832 she gave birth to another son, Archduke Ferdinand Maximilian, and the next year another son, Archduke Charles Louis. Her next child, a daughter, died before she was five years old in 1840 and later that year tragedy struck again when she delivered a stillborn baby boy.

There was little time for mourning though as events were building rapidly toward the calamitous Revolutions of 1848. It was then that the strength and determination of Sophie proved invaluable for the House of Hapsburg. She persuaded (with little difficulty) her husband to abdicate his rights to the throne and so Emperor Ferdinand I passed the throne to her son and retired. The young and determined Emperor Francis Joseph was then able to save the situation, suppressing rebellions in Italy, Austria and (with help from Russia) in Hungary. It was taken for granted that Sophie had arranged it all and she remained a force to be reckoned with in Vienna. Because of this, it is not surprising that Sophie wanted to hold fast to a working formula and she fully approved of the idea of her eldest marrying a Bavarian princess as his father had. She did not, however, approve of that choice falling on the beautiful young Princess Elisabeth, “Sissi”. Sophie warned that she was too young, too liberal and too immature but Francis Joseph would have no other and the two married. 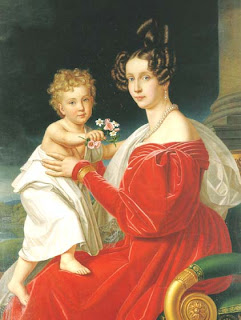 To be sure, Sophie and Sissi were polar opposites. It seems clear that Sissi did suffer from some degree of depression and she was willful and headstrong. Sophie could not begin to understand her daughter-in-law. For her, duty always came before personal happiness. She also could not understand the way Sissi seemed always downcast for no apparent reason. When Sophie had determined that it was her duty to marry Archduke Francis Charles she said, “I have decided to be happy, and I will” and for her, with her level of self-discipline, it was as simple as that. She also could not abide the liberal affiliations of her daughter-in-law as Sophie was ever on the alert for any potential threats to the Hapsburg empire and, remembering 1848 all too clearly, saw Sissi’s fascination with Hungary, particularly dissident elements within Hungary, as not only foolish but possibly dangerous to the dynasty. It also did not help their relationship that, concerning issues over which the two clashed, Sophie was usually proven correct.

This relationship, should also been seen in context. Sophie was extremely optimistic about the marriage of her second son, Ferdinand Max, to Princess Charlotte of Belgium and was greatly impressed by the charm and intelligence of the young lady. When Mexican monarchists enlisted the Archduke to become Emperor of Mexico, Francis Joseph was adamantly opposed and Sophie had to work to keep the two from an open break and when the Emperor demanded that his brother renounce all rights to the Austrian throne in order to accept, Princess Charlotte enlisted Sophie’s help in trying to dissuade her son from such a drastic measure. She wished her son well on his new enterprise, he had always been something of a favorite, and Sophie was positively devastated when word came in 1867 that her son, Emperor Maximilian of Mexico, had been shot by a republican firing squad. He had written her regularly and though news of the slow deterioration was widespread, Maximilian had always been hopeful and optimistic. Sophie was heartbroken and retired from public life, never really recovering from the loss of her beloved boy.

Princess Sophie of Bavaria, Archduchess of Austria, died at the age of 67 on May 28, 1872 from what was determined to be a brain tumor.
Posted by MadMonarchist at 12:19 AM