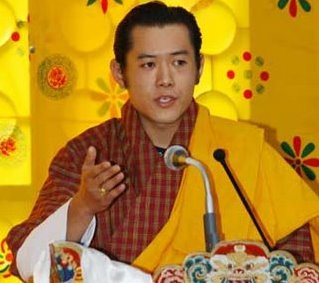 I just watched the documentary “The Last Shangri-La” about the Himalayan Kingdom of Bhutan and I can recommend it, though it is not all pleasant viewing and did, at the very end, confirm some of my suspicions that no modern film could be so completely “reactionary”. It is not a very long film at all (quite small, like the country) and I would say more about who was behind it but, alas, I can find no listing of it on the channel I watched it on nor have I been able to find anything on it on the internet -though it may be there, it is only that “The Last Shangri-La” is not a very original title; everyone refers to Bhutan that way, so tons of stuff comes back that has nothing to do with the documentary in question. Anyway, moving on to the content, the underlining theme of the movie is how the Kingdom of Bhutan has been dealing with opening itself up to the outside world, the effects of westernization and of course democracy.

Rather ironically, I thought, for a documentary airing on American TV, the first issue discussed was the introduction of television which everyone interviewed said was a very bad thing. Some, of course, highlighted the positive aspects but still were of the opinion that the negatives outweighed the positives. A great many of the new evils that have cropped up in Bhutan to spoil their isolated paradise were traced back to the all-powerful idiot box and the hypnotic effect it had on children especially. Work production has suffered because, in the middle of the day, people leave the fields to rush home and watch their favorite soap operas from India. Children in school began getting into fights mimicking the theatrical attacks of American WWF “wrestlers”. Suddenly, the Bhutanese began to know about high-tech toys, fashion trends, violent rap music and so on. Prior to modernization, as one Bhutanese youth said in the film, Bhutan was a poor country with rich people; “rich” because they were happy. However, television and the subsequent foreign products, clothes and devices have given them things to envy and spread dissension. 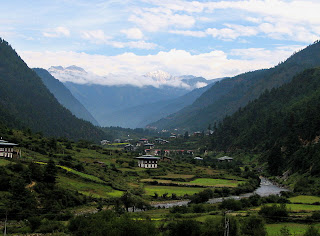 As I have said before, in the years before this modernization, the Kingdom of Bhutan was usually my answer when someone would press me to name my “favorite” existing monarchy (a silly question in any event). It was, therefore, particularly painful for me to see Bhutanese young people dressed like street hoodlums in Detroit, flashing “East” or “West” coast gang signs and smoking marijuana. That was blamed on television too. Since time immemorial marijuana has grown wild all over Bhutan but it never occurred to any of them to smoke the stuff. They collected it only to feed to their pigs as they noticed that pigs fed marijuana plants seemed to eat a great deal more than others and gain weight faster (go ahead and come up with your own jokes about Bhutanese pigs with the munchies). Television taught people that marijuana could be smoked and there was a huge upsurge in drug use which was so alarming it prompted Bhutan to become the first country in the world to ban all smoking of any kind (well, there goes paradise…) but of course that is impossible to really enforce.

Then, of course, there is democracy. The Bhutanese who spoke on camera, almost unanimously, seemed to wrinkle up their noses when they said the word. Nor was skepticism about democracy confined to the older people who had spent their entire lives under the old, absolute monarchy, but young people as well. Everyone expressed great love and admiration for the King, that was one constant that was comforting. They may disagree on democracy, westernization, this, that or the other thing, but the King remains sacrosanct. However, his decision to hand power over to the people, even by the time this documentary was done, left most utterly bewildered. They could not imagine why he would do such a thing. As one young woman said, she knew that in other places people cheered when democracy was introduced and were overjoyed, but in Bhutan the people reacted with tears and tears of utter sadness rather than joy. It is also not, as some would claim, that Bhutan was unfamiliar with democracy or simply indifferent to it. They were repelled by the very idea of it. 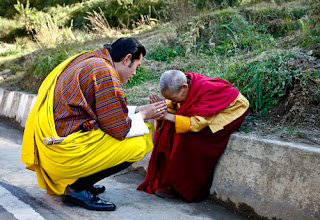 In the film, Bhutanese people relate what they knew of democracy from seeing its effects when introduced in their neighbor countries of Nepal and India. They saw democracy bring partisanship, hatred, turmoil, violence and an obsession with money and power -all of which had been blissfully absent from their little kingdom. Even some of the young Bhutanese did not like the changes. As one said, the one strength Bhutan always had was unity. The King had but to raise his hand and the whole country, every last man, woman and child would stand with him. Democracy was already bringing division and the young man worried that their policy of “Gross National Happiness” would be eventually destroyed by this. Other, older Bhutanese mourned the divisions already taking effect. As one said, a husband would belong to one political party and his wife to another and if democracy could divide a family it could surely divide a country and that was very worrisome. Under the King, there were only Bhutanese but now, under democracy, there were political parties which set the people against each other.

Of course, the film was not perfect. The first thing that put me off was that, obviously for no other reason than “shock” value, the filmmakers chose to start off with a brief highlight of the Bhutanese practice of painting large phalluses on homes and businesses. They do at least mention that this is a custom dating back to a certain religious figure, done to ward off misfortune and is not seen as anything sexual in Bhutan -but still, there was no reason to highlight this other than, again, to “shock” western audiences. And, at the very end of the film, they mentioned in the closing text that in the first elections there was 70% or better turnout and that democracy was being accepted and that it looked like everything is going to be okay. This, of course, in spite of everything the documentary had just spent the last half hour telling us about the growing problems in the country and how upset people were about it. Regardless of the facts though it seems that the western filmmakers could not resist the urge to leave on a high note that democracy and westernization would be good things in the end. Yes, feuding political parties, violent children, drug addicted teens, greed, envy, worry -Bhutan is indeed receiving all of the benefits of modern “progress”. May God have mercy on them.
Posted by MadMonarchist at 12:22 AM