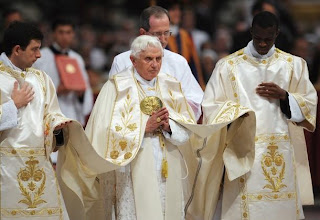 Yet another one. One Henry Knox, a member of the President's Advisory Council on Faith-based and Neighborhood Partnerships, went on a tirade against His Holiness Pope Benedict XVI for Catholic teaching against the use of condoms (and all artificial birth control) which he blames for spreading AIDS in Africa. Harry Knox said, "The Pope’s statement that condoms don’t help control the spread of HIV, but rather condoms increase infection rates, is hurting people in the name of Jesus. …The pope’s rejection of scientifically proven prevention methods is forcing Catholics in Africa to choose between their faith and the health of their entire community. Jesus was about helping the marginalized and downtrodden, not harming them further."

This never fails to outrage me, and I think it should outrage all Christians and most religious people in general. For one thing, it is incorrect on the face of it and Knox has refused to retract his statement even when presented with the facts that pushing condoms as the "full proof" means of preventing AIDS simply encourages risky behavior (i.e. fornication) and sooner or later someone will forget their condom, it will break, slip off etc, and people get AIDS. On the other hand, if they were to follow the Pope's advice and have "relations" only with their spouse there is *zero* chance of getting AIDS. Oddly enough Mr. Knox is also a homosexual activist -yeah, let me repeat that: the *homosexual activist* is blaming a German cleric who has taken a vow of chastity and preaches no sex outside of marriage for *spreading AIDS*.

These people utterly frustrate me. It is just such an asburd argument. Do they think all Africans are Catholics and contracted AIDS only because the Pope said condoms are immoral? Do they really think that the millions suffering from AIDS are all Catholics who are absolutely obedient to the Pope when he speaks against condoms but turn that absolute obedience off when he says there should be no sex outside of marriage? How could anyone be that ignorant and contradictory?! Obviously, they are not and this stuff shows up for what it really is which is simply another attack on a traditional authority figure, a Christian religious leader and an advocate for traditional morality. The President would do well to fire this slanderous degenerate but I will not hold my breath for that. Thankfully, the Pontiff is also not the sort of man to hold back the truth or change his position based on such verbal attacks and popular opinion -so long live the Pope!
Posted by MadMonarchist at 8:30 PM