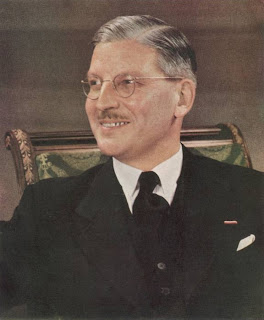 The name of Dr Kurt von Schuschnigg is one not often remembered, which is, in itself, rather tragic. When he is remembered is mostly as a footnote connected with the Nazi occupation of Austria and almost never is he remembered in connection with monarchy, yet a monarchist he showed himself to be. He was born on December 14, 1897 in Riva del Garda, now a part of Italy but back then part of the Dual Empire of Austria-Hungary. His father was General Artur von Schuschnigg and he grew up in a very conservative and religious atmosphere (a sure recipe for greatness) and was educated at the Jesuit College in Feldkirch.

During World War I he served at the front in the Imperial-Royal Army fighting for his Emperor and his beloved Austria. During the course of the war he was taken prisoner by the Italians and endured as a POW until September of 1919. Once released he went attended university at Innsbruck, graduated and began working as a lawyer. These were turbulent years for Austria with her empire having been torn from her, political extremists causing trouble and forbidden by the victorious Allies to join with her German-speaking cousins as many in the immediate aftermath of the war wanted to do. Even then, it should be noted that this was considered largely as a means of survival rather than any lack of national pride. After the horrors of the First World War and with hardly anything of the former country left, the Hapsburg Empire gone, many wondered exactly what “Austria” meant.

Schuschnigg had a pretty good idea at least of what it meant and he joined the Christian Social Party and was elected to parliament in 1927. In 1932 Engelbert Dollfuss of the Patriotic Front appointed him Minister of Justice in his government (often labeled as ‘Austrofascism’) and later Minister of Education. The Patriotic Front supported a Catholic, corporatist Austria with a big enough vein of nationalism to make them opposed to the union with Germany. As a result they were vehemently opposed by the Nazi Party which Dollfuss tried to suppress. However, when France and Britain abandoned Italy over the seizure of Ethiopia Benito Mussolini dropped his opposition to Hitler and befriended the Nazi regime, giving Hitler a green light to move against Austria which Mussolini had previously opposed.

The Nazis assassinated Dollfuss and Schuschnigg was thrust into power as Chancellor at a time of the greatest crisis for the Austrian state. Schuschnigg knew that something had to be done to encourage Austrian national pride and closer ties with the religious, cultural and historic roots of the nation. Obviously, many of those in the Patriotic Front thought that a return to the monarchy under the House of Hapsburg would be the way to go. Prior to his death Dollfuss had removed the constitutional ban on the Hapsburgs returning. After a monarchist rally in Vienna Chancellor Schuschnigg repealed the laws banning the Hapsburgs from Austria and, with the promise of non-interference from Mussolini, announced that it would be his right to decide on the question of a Hapsburg restoration and indicated his support of the idea.

The Nazis went ballistic upon receiving this news and it is remarkable to read just how unnaturally paranoid they were about a Hapsburg restoration. Rumors began to circulate that Austria and Czechoslovakia were planning to put the Hapsburg Emperor back on the throne, possibly with Hungary going along as well, to attack Nazi Germany. Nothing so grandiose was imagined of course but Schuschnigg did have a secret meeting with Archduke Otto von Hapsburg in which he promised that the restoration would be carried out as soon as possible; probably the following year even if this were to be opposed by the great powers.

Of course, as we know, Schuschnigg and the Austrofascist state did not live long enough to see the transition to monarchy. Hitler decided to act at once to head off the possibility of a Hapsburg return and launched his operation against Austria; tellingly codenamed “Otto”. Nazi demonstrations erupted across Austria whereas Schuschnigg was undermined by the new Rome-Berlin Axis and Italian preoccupation with aiding the nationalists in Spain. The Germans invaded Austria in March of 1938 and soon annexed it to the “Third Reich”. Kurt von Schuschnigg was arrested, kept in solitary confinement for a time and spent the rest of the war years in concentration camps before being liberated in 1945 by the US Army. He moved to America after the war where he wrote and lectured before his death in 1977.
Posted by MadMonarchist at 12:18 AM