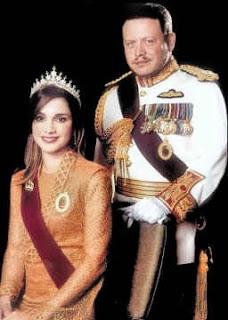 On this day in 1999 Abdullah bin al-Hussein became King Abdullah II of the Hashemite Kingdom of Jordan. During his short reign he has proven a model monarch to the world and for the Middle East in particular. He presides over a strong monarchy but a humane one, a country where true progress is advanced but tradition is still respected. His stable leadership, his defense of Jordan from all varieties of radicalism have attracted foreign investment and made the economy improve a great deal in recent years despite Jordan having almost no oil and very little water. Since 1993 he has been married to his famous and lovely wife Queen Rania. They have four children. King Abdullah II is a 43rd-generation direct descendant of the Prophet Mohammad. The Mad Monarchist extends congratulations to His Majesty and may he reign for many more years to come.
Posted by MadMonarchist at 12:10 AM