The Death of a Queen 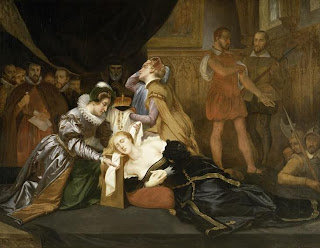 It was on this day in 1587 that Her Majesty Mary I, Queen of Scots, went to her eternal reward, being executed by her cousin and fellow monarch Queen Elizabeth I of England. I must confess the is something I have never been able to forgive the celebrated 'Good Queen Bess' for. It was not simply that the evidence against her have been pretty much universally accepted to have been forgeries, a classic case of entrapment, but more so because of the dangerous precedent it set. It is at least to the credit of Elizabeth that she agonized over the decision, most for that very reason; being a reigning queen herself she was not enthusastic about sending one her fellow monarchs to the chopping block.

Of course, monarchs have long made war against each other, unfortunate but often unavoidable, but this was something different. Having a court sit in judgement on an anointed queen, a sovereign monarch, even in a different country, was quite an unheard of thing. Sadly, only one generation would pass before such a fate befell another monarch of the House of Stuart. For a monarchist like myself such a thing is unthinkably ghastly, that any monarch should be made to answer to any court of law, that any collection of jurists should judge the guilt or innocence of someone chosen by birth, anointed by God as the sovereign of the realm. Their persons should be regarded as sacred, inviolable and given the situation even at the time it still seems tragically useless to me. The Church may not have judged Queen Mary a martyr (at least they havn't yet) but she is still a martyr for monarchy just as much as her grandson Charles I or King Louis and Queen Antoinette in France.

May the Queen of Scots rest in peace forever in the light of God's Holy Face.

Posted by MadMonarchist at 12:35 AM