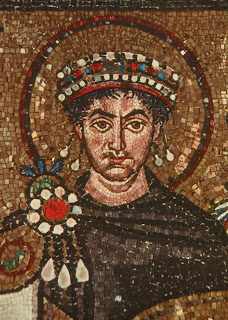 Emperor Justinian I of the Eastern Roman Empire (aka the Byzantine Empire) is known by a number of names from Justinian the Great for his accomplishments overall, Justinian the Lawgiver for his famous legal code, he is a saint in the Eastern Orthodox Church and is one of those famous statesmen features in the House chambers of the U.S. Congress. He is, perhaps, best known in a historical sense as being the man who came the closest to restoring the former greatness of the old Roman Empire after the collapse of Rome in the west. Although his reign was shaky at times and he left large problems for his successors one would be hard pressed to find an area in which the Emperor Justinian was not a success. He left behind a great system of laws, he won numerous victories over his enemies, expanded the empire, built magnificent monuments and is still venerated as a saint.

Like many such emperors in the east his exact origins are unknown. He was born in the southern Balkans, sometime between 400 and 500 AD to the Latin-speaking family of the soldier-turned-monarch Emperor Justin I. As his father grew too old to rule Justinian became consul in 521, commander of the eastern Roman armies and in 527 succeeded as Emperor of the Eastern Roman Empire. Coming from humble origins he was known to be a rather open and easy-going man but distrustful of the nobility. He was extremely ambitious and energetic and granted a high degree of authority to his consort Empress Theodora. He appointed wise men to put the empire on sound financial ground and availed himself of the very talented general Belisarius.
In an unprecedented move he revised all of Roman law which would eventually become the foundation of civil and canon law with remnants lasting even till today. The infamous Nika riots almost ruined him but the quick-thinking of his wife saved the day. He continued the war with the Sassanid Empire with rather mixed results but finally secured peace with Persia in 532. Soon after he dispatched a large expedition to north Africa where his armies were triumphant, re-taking the old Roman provinces of Tunisia, Corsica, Gibraltar, the Balearic Islands, the southeast of Spain and other areas. Having dealt with the Vandals he then moved against the Goths in Italy where General Belisarius captured Sicily, Naples and finally recovered the Eternal City of Rome itself.

The campaign had to be halted when the Persians broke the peace and war with the Sassanid Empire resumed. Belisarius was sent east to deal with the attacks there, but he seemed to have lost the confidence of Justinian and for disputed reasons was recalled to Constantinople. As before the war between the Persians and Byzantines bogged down into a stalemate until both sides again agreed to make peace. However, in Italy, the Ostrogoths had marched down from the north and retaken many of the previous Byzantine conquests in the south of Italy. After the fighting surged back and forth in favor of one side and then the other the Goths were finally defeated in 552. Only a couple of years later Byzantine rule was tested by a large Frankish invasion but the Byzantines were victorious and at the cost of a great deal of blood and treasure Italy remained firmly in East Roman Imperial hands. At no other time was the dream of a restored Roman Empire, east and west, so close to realization.

On the religious front things were first left largely in the hands of Theodora, but following her death Emperor Justinian took a more active role and insisted on stressing imperial control but also enforced orthodoxy, protected the clergy and the monasteries. He strived for religious unity in his empire and came down hard on heretics. Justinian rebuilt the Hagia Sophia and truly made Constantinople the center of Orthodox Christianity, in terms of both authority and artistic grandeur. In his dealings with the Pope he tried to maintain unity between the two halves of the Church, often infuriating his clerics in the east. A tacit sort of unity was maintained but by trying to please everyone the typical result was that neither side was fully satisfied.

Emperor Justinian died in 565 after some hard final years for the empire and with the cost of his many building projects and military campaigns starting to be painfully noticed. His reign had been a meteoric period of success for the Byzantine Empire, but the very things that made it great also made it all the harder for those who came after him and the power and prestige of the East Roman Empire were soon in another period of decline.
Posted by MadMonarchist at 12:16 AM