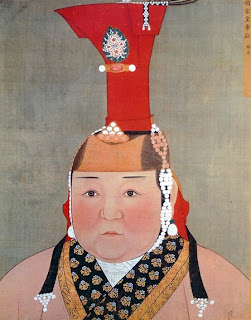 Although not an absolute rule, it was the tradition for Mongol emperors to have four wives and each of them had their own household with minor wives and concubines. We know very little about most of them, many of their names are not even recorded unless one was especially favored or exerted some influence on her husband or children. In fact, not even all the names of the children of the emperors are recorded. However, one who is well known is the favorite consort of the great Kublai Khan, his second wife, a Mongol princess named Chabi. She was a remarkable woman and of the 12 sons of Kublai Khan it was only those born of Chabi who gained prominence.

Other than his mother, no other woman held such a prominent position in the Yuan Empire as Chabi did and, like the mother of Kublai (a Nestorian Christian), her influence was especially felt in dealing with religion. Chabi was a devout Tibetan Buddhist and it was partly through her influence that Tibetan Buddhism became the most prominent religion in the Yuan court, though the policy of religious freedom was always maintained. Chabi also set an example in promoting a smooth transition of power when the Mongols first conquered China by taking in hand the empresses of the defeated Song dynasty when they were brought to Peking. She took care of them and ensured that they were treated with dignity and respect.

Chabi did a lot of little things to help her husband. Always practical, she was something of a fashion designer, coming up with a new style of wide-brimmed hat sleeveless tunics for Mongol troops serving in warmer, southern climates which the Mongols, used to the frozen steppes of the north, were not accustomed to. She never lost her habits as the daughter of a nomadic people who had to make efficient use of scant resources. An example of this is her organizing the ladies of the Mongol court to spin used bow strings into cloth rather than see them go to waste.
Kublai Khan was very devoted to Chabi and when she died in 1281 he was really never the same. A distant cousin of her's, Nambi, took over the position she had previously occupied but no one could replace her in the heart of the Great Khan. After the death of Chabi Kublai was often depressed, lacked the focus and energy of early years and his overindulgence in food and drink thereafter took a toll on his health which eventually led to his own passing in 1295.
Posted by MadMonarchist at 12:38 AM