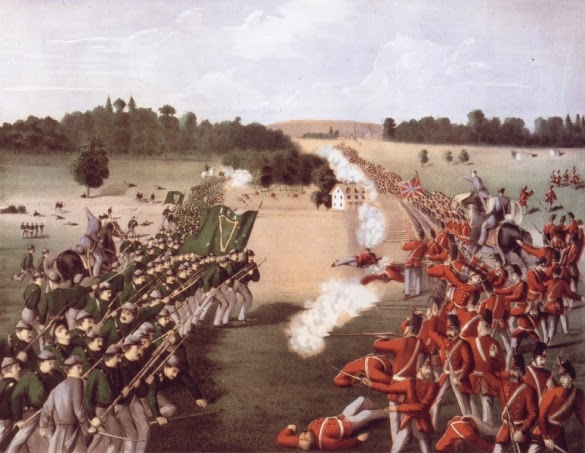 On this day in 1866 Irish republicans of the Fenian Brotherhood crossed over from New York to invade Canada. Most of these men were veterans of the Union Army, fresh from victory in the American Civil War in which Irish immigrants fought for the northern side in large numbers. Some American authorities were content to look the other way because of the lingering antagonism between Britain and America over the War Between the States in which many in the north viewed the British Empire as favoring the Confederates. The amount of sympathy for the south in Britain was probably exaggerated in the minds of many northerners but it did make them less than vigilant in trying to stop what was, effectively, a private, criminal enterprise from attacking a neighboring country. There were actually a series of attacks over a wide area and a number of years, known as the "Fenian Raids". The goal of the Fenians (and these were the first to use the name 'Irish Republican Army'*) was to effectively hold Canada hostage, or at least some part of it, in order to force Great Britain to grant independence to Ireland. Obviously, it was quite a far-fetched plan and none of the raids came anywhere close to success. Despite the presence of many hardened veterans and some that were very well equipped (many even wearing full US Army uniform) the republicans proved no match for the British regulars and Canadian militia. In fact, this was something of a preview of things to come as many of the Canadian militia opposing the Fenians were Protestant "Orangemen" from Northern Ireland who had a special disdain for the Catholic nationalists. American authorities also did finally take action to stop the attacks on the south side of the border and the Fenian raids came to nothing.

*Additional note: It should be remembered that, unlike the republican terrorists who later adopted the name of the IRA, these were men who clearly identified themselves, wore uniforms and fought in open battle against armed soldiers and were not cowards who hid their faces and planted bombs to kill helpless civilians. Even in terms of republicans, some are much better than others.
Posted by MadMonarchist at 11:03 AM