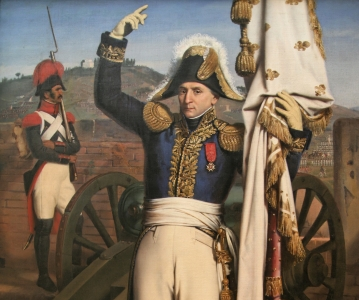 Louis Francois Perrin, Count of Precy, was born in Anzy-le-Duc on January 14, 1742. He came from a family well connected with the French royal armed forces and it was no surprise when, as a young man, he decided on a military career. In 1755 he doubtless benefited by some family ties when he joined the Regiment of Picardy in which his uncle served as a battalion commander. He participated in the Seven Years War (French & Indian War in America) but did not have too much excitement, being mostly confined to garrison duty. In 1774 he was posted to the island of Corsica (which was still not exactly enthusiastic about French rule) and was promoted to captain. He had a distinguished military career, performing his duties well and in 1784 was awarded the Cross of St Louis and was later promoted to lieutenant colonel in the Regiment of Chasseurs (light infantry) des Vosges. Precy and his men were posted to Lyon from 1787 to 1789 and then to Collioure. For his continued meritorious service, in November of 1791, he was appointed to the King’s Foot Guards but that unit was disbanded the following year.

The dissolution of the Guards was, of course, due to the rising tide of the French Revolution which was gaining strength after breaking out, more or less, with the storming of the Bastille on the fourteenth of July 1789. Precy, who was ever loyal to His Most Christian Majesty King Louis XVI, was not looked on kindly by the increasingly powerful revolutionary elite and on August 10, 1792 he retired from military service and withdrew to his estate of Marcigny. However, his service in Lyon was not forgotten in that important city, particularly by the loyal people there who were becoming increasingly alarmed by the radicalism of the French revolutionary government. Finally, the royalists of Lyon rose up in opposition to the convention (the revolutionary body ruling France) and sent emissaries to ask Precy to come and take command of the army defending Lyon. Willing to serve, Precy agreed and threw himself into the defense of Lyon with zeal, establishing fortified lines, strong points and organizing artillery support from Chenelette. He was not in an enviable position, with few resources and a population that was divided. The anti-revolutionary forces in Lyon included royalists as well as many Girondists who were republicans but who felt the revolution had gone too far (the massacre of the Girondists by the radical Jacobins marked the start of the Reign of Terror). 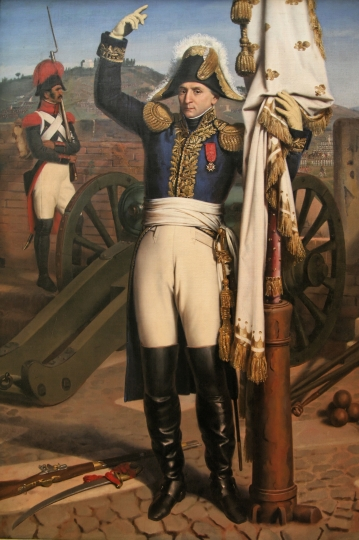 The army defending Lyon, however, was also largely moderate republicans but the officer corps was predominately royalist, including of course Precy and very aristocratic. They were united only by their common opposition to the radical regime in Paris. The convention took action, diverting the Army of the Alps from its invasion of Savoy and on August 9, 1793 the siege of Lyon began. The Count of Precy was outnumbered roughly three-to-one but he put up a stiff resistance in spite of the heavy bombardment from the revolutionary forces. However, the overwhelming strength of the enemy took its toll and despite repeated counter-attacks by the cavalry (until there were none left) every time they advanced, the situation seemed hopeless as the protecting forts fell one by one. Eventually, the political divisions inside the city began to take their toll and civic leaders proposed making a negotiated peace. Precy, certainly speaking for his fellow royalists, opposed this and wished to carry on the fight. Given what had already happened in France, no one could realistically hope to survive a capitulation to the revolutionaries. Nonetheless, the decision was made to surrender and a truce was declared on October 7 for negotiations to begin.

Knowing what the revolutionaries thought of honoring agreements and what they considered “justice”, Precy would have no part in the proceedings. He gathered together the like-minded survivors of his army, about 1,000 infantry and 200 cavalry and on the morning of October 9 managed to break out of Lyon and escape. However, they were attacked every step of the way by the revolutionary forces as they pushed through St-Cyr-au-Mont-d’Or, Poleymieux, les Cheres, Alix, Theize, Oingt and to St Romain de Popey. Sadly, by that point, almost the entire force had been wiped out but Precy survived, protected by his loyal men, the few that survived and he was hidden in Ste Agathe-en-Donzy for 15 months before escaping across the border to Switzerland disguised as a jockey. 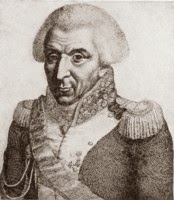 In 1795 the count made his way to Turin in the Kingdom of Piedmont-Sardinia and two years later married the widow of a cousin of his who had died at the guillotine in Lyon named Jeanne-Marie de Chavannes. From Turin he eventually moved to Vienna and lived there in Austria until 1811 when he was finally able to come home to his beloved France. Precy took up residence in Dijon and after the restoration of the monarchy, the devoted old royalist was able to have his moment of glory when, in August of 1814, he returned to Lyon as commander of the National Guard there. Of course, it was not quite over yet and when Napoleon returned during the “Hundred Days” the count was placed under house arrest. However, once that episode was passed, he returned to his duty, faithfully serving his King and France until his retirement. He died on August 25, 1820 and the following year his remains were moved to a special memorial in Lyon.
Posted by MadMonarchist at 12:11 AM