The Ming Dynasty After the Fall 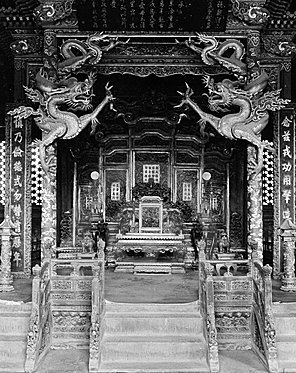 A couple weeks ago, on April 25, was the anniversary of the end of the rule of the Ming dynasty over China with the death of the last Ming Emperor, Chongzhen, in 1644. By the time Emperor Chongzhen came to the throne it is likely that the Ming Dynasty was already beyond repair. He tried to set things to rights but corruption had run rampant, the treasury was empty, bad harvests and drought had caused widespread famine and hunger and rebellions were becoming increasingly commonplace. The last straw was the attack of a group of rebels under Li Zicheng who had already turned usurper by declaring himself emperor of the “Shun Dynasty”. With no hope for survival, Emperor Chongzhen gathered the female family members together and, with tears streaming down his face, killed them all with his own sword before hanging himself in the Jingshan Park behind the Forbidden City. Hundreds of courtiers dutifully followed their monarch in death rather than serve the usurper. As we know, Li Zicheng never became a real ruler of China, being driven from power and defeated by the Mongol and Manchu forces of the Qing Dynasty that next assumed the Mantle of Heaven. The Ming Dynasty tried to carry on for a time as the Southern Ming Dynasty but they were a beaten and increasingly fractured force, eventually giving way to the forces of the Great Qing Empire.

The family, under their original name of Chu, continued to survive and for that brief time early on they even then made rather uncomfortable enemies for the new Manchurian dynasty. Emperor Huang Taiji had come to power in Peking at the head of his forces, standing as the avenger of the fallen Ming Dynasty, punishing the usurper who had overthrown them yet still determined to see their own victory consolidated rather than handing power back over to the Ming. They had won, following all established tradition, and secured the Mandate of Heaven, happily without actually overthrowing the previous dynasty. So it was that the suppression of the Southern Ming could be seen as somewhat awkward. In any event, once all was settled and secure, the Qing Dynasty took steps to show that there were no hard feelings between themselves and their imperial predecessors in China. So it was that the Qing Emperor Yongzheng (one of the three great Qing monarchs who reigned at the height of Manchu power and prestige) granted to the heir of the Ming Dynasty the title of “Extended Grace” in reference to the mercy that the Ming had been shown by their successors. So, the heir of the Ming dynasty, head of the Chu family, was the Marquis of Extended Grace in the aristocracy of the Great Qing Empire.

There was only one condition attached to the title by the Manchu court and it was really no condition at all but more akin to a reward for doing what every faithful Chinese gentleman would feel obliged to do in any event and that was that twice a year the Marquis of Extended Grace was to visit the Thirteen Imperial Tombs (of the Ming Dynasty) to perform the rites of remembrance and give a report on this to the Qing court for which the Manchu Emperor would compensate him for his expenses on these occasions. So, in effect, the Qing Emperor was paying the Ming heir for doing officially what he almost certainly would have done or would have wished to do in a private capacity in any event. After the passage of centuries most of the people of China forgot about the descendants of the former dynasty and the family itself came to be in a very modest condition, by not a few standards some would even say impoverished. However, each Marquis of the Chu family continued to dutifully visit the Thirteen Imperial Tombs and receive their allowance from the Qing court without ever actually meeting the Great Qing Emperor himself. That situation persevered until finally the reign of the Qing Dynasty too came to an end.

The British tutor of the last Manchu Emperor, Reginald Fleming Johnston, relates in his book, “Twilight in the Forbidden City” about his noticing the name of the Marquis of Extended Grace in the court newspaper and suggesting to the young Emperor that he should meet with the heir of the former Ming Dynasty. It was all arranged and on September 7, 1924 the last Qing Emperor met face to face with the heir of the last Ming Emperor in the Forbidden City (itself a monument of the Ming Dynasty reign). Later he called on Johnston to thank him for having arranged the visit but protested when Johnston offered to return the favor and visit the Marquis at his own home. He confessed that the traditional robes he wore were borrowed and he did not wish anyone to see the poor state he was living in. Johnston agreed to respect his wishes but did photograph him and later sent him copies of the snaps along with some gifts to thank him for his courtesy. He was a loyal and genteel man who greatly impressed the British scholar as did his actions later. 1924, after all, was the year that the last Qing Emperor was expelled from the Forbidden City by the corrupt forces of the Republic of China and in the aftermath it became much easier to tell who the true friends of the monarchy in China were.

Immediately after the Revolution, the republicans tried to make a show of paying pretended homage to the memory of the Great Ming Empire, the last of the dynasties of the majority Han nationality. The traitor Sun Yat-sen even went to the tomb of the founder of the Ming Dynasty (absurdly wearing a western frock coat and top hat) to proclaim that they had driven the foreign Manchurians from power. However, they took no care to actually preserve and maintain the relics of the Ming era and the tombs themselves soon began to fall into decay. Their pretended respect for the old Ming Dynasty was just that; a pretense and nothing more. It also annoyed the republican elite that the Ming heir, the Marquis of Extended Grace, even after the fall of the Qing Dynasty, continued to pay his respects at the tombs of his ancestors in the name of the Manchu Emperor. As stated above, this was still going on decades later in 1924 when the Marquis and the last Emperor finally met in person. The republicans had tried to convey the idea that they respected the history and culture of the old, traditional China by paying lip-service to the Great Ming Empire of the past. However, their game of pretend was ruined by the fact that the Ming heir remained loyal to the last Qing Emperor and continued to perform the duties attached to the noble title he had been given. He of course, had no reason to prefer the republic. It had done nothing but betray the dynasty which had shown favor and reconciliation to his own family, they certainly did not restore the Ming nor did they even grant any assistance to the Marquis in his poverty. They also refused to recognize his noble title. 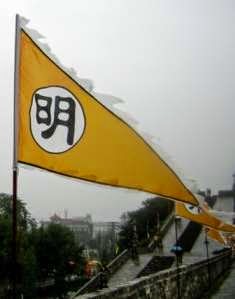 No doubt some today would like to assert that the fidelity of the Ming heir to the Qing Dynasty was purely a matter of convenience, of serving the powers-that-be rather than any sincere act of principle. Those people, however, would be totally wrong as the actions of the Marquis of Extended Grace himself prove. Naturally he came to know that, after being granted an imperial audience himself in 1924, the last Qing Emperor was expelled from the Forbidden City, was effectively placed under house arrest by the republican authorities and later managed to escape to the foreign concession in Tientsin, given a safe haven in the Japanese legation. Chu Yu-hsun, Marquis of Extended Grace, heir of the Ming dynasty, despite his poverty, managed to save enough money, which was a considerable sacrifice for himself, to make the journey to Tientsin simply to kowtow before his Emperor one last time and assure him of his continued loyalty and devotion. Johnston mentions in his book that the Marquis had two young sons at the time he met him but what exactly became of the family I do not know. Under the republic they slipped into total obscurity with many of their former loyalists eventually becoming secret societies and gangs in China and in foreign countries, some perhaps not even cognizant of their origins. Still, despite the effort of the republic to use any lingering loyalty felt for the Ming dynasty to their own advantage, the Marquis of Extended Grace set the right example of loyalty to his own ancestors and of loyalty to the imperial system.
Posted by MadMonarchist at 12:07 AM