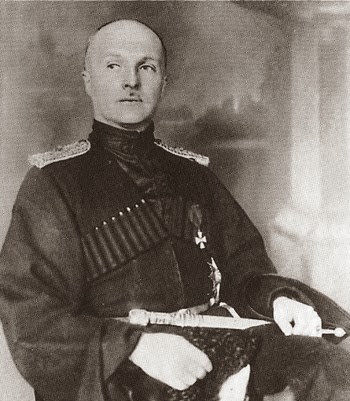 Pavlo Petrovych Skoropadskyi was born on May 3, 1873 in Wiesbaden, the German Empire, to an old, aristocratic Ukrainian family. The most famous ancestor of the family was Ivan Skoropadskyi who, under Tsar Peter the Great, had become Hetman of the Ukrainian Cossacks (Hetman being a chieftain or head of state, originally an elected position). Pavlo’s father was a colonel in a cavalry regiment of the Russian Imperial Guard and served in the Caucasian War before becoming a local political official and his mother was also related to a number of the most prominent Ukrainian families. He grew up hearing about the long history of service his ancestors had given to Ukraine and the Russian Empire. Considering his background, it is not surprising that he decided on a military career at an early age and after his preliminary education went on to graduate from the Page Corps cadet school in St Petersburg in 1893. He was commissioned a second lieutenant in the Chevalier Guard cavalry regiment.

In the following years Skoropadskyi earned several promotions and started his own family when he married Oleksandra Petrivna Durnovo, daughter of the General Governor of Moscow. When the Russo-Japanese War broke out, Skoropadskyi was given command of a company of the 2nd Chita Cossack Regiment of the Trans-Baikal Cossack Host. He distinguished himself and was moved to the staff of the commanding general of the Russian Far East and earned numerous decorations for his service during the war with Japan. In 1905 the Tsar promoted him to colonel with a place on his own military staff and in 1910 he was given command of a Finnish cavalry regiment. The following year, so great was his prestige, he was posted to the Life Guard Cavalry Regiment, the elite troops trusted with the personal security of the Tsar himself. In 1912 he was promoted to major general and, at the start of World War I, was given command of a cavalry brigade in the first guards division, part of the First Army under General Paul von Rennenkampf, who he knew from the Russo-Japanese War. Skoropadskyi earned further praise for his service in the invasion of East Prussia and for his contributions in numerous battles was promoted to divisional command and in 1916 was made a lieutenant general.

1917 saw Skoropadskyi entrusted with the command of an army corps which was later to become the First Ukrainian Corps. The troops under his command were victorious in numerous engagement, earning particular praise for his successful defense against attacks on the Romanian front. However, that was also the year that the Russian Empire began to fall apart with the revolution that brought down the monarchy, replacing it with the weak and ineffectual provisional government that tried to keep Russia in the war. The empire was coming apart at the seams and Ukraine was no exception to this chaotic trend. That same year, radical elements began to separate the Ukraine from Russia, ultimately resulting in the declaration of independence of the so-called Ukrainian People’s Republic in 1918. It became clear to Skoropadskyi that Ukraine and Russia had enemies on the home front who were a far greater threat than that posed by the German Empire and Austria-Hungary. Ukraine itself was in chaos as rival revolutionary governments struggled for power while Russia itself fell prey to the machinations of the Bolsheviks.

Skoropadskyi began to make common cause with the Germans who were increasingly alarmed at the spread of revolutionary communism (though they were partly to blame for its introduction) and Skoropadskyi seemed an ideal man to work with as he had a reputation as both a solid Russian monarchist and a Ukrainian patriot. Ukraine had, effectively, become a protectorate of Germany after the Russian government was forced to come to terms with the Germans and they helped engineer the coup that brought down the Ukrainian People’s Republic and solidify Ukraine under one, nationalist, government. General Skoropadskyi was favored by the Germans, while Austria-Hungary favored a new monarchy under Archduke Wilhelm of Austria who had commanded Hapsburg Ukrainian troops in the war. However, as the dominant partner, it was the will of Germany that prevailed and Skoropadskyi was installed as Hetman of the State of Ukraine, having close contact with the Germans and even meeting with Kaiser Wilhelm II.

Naturally, because of this, his enemies on the left accused him of being a collaborator and lacking in Ukrainian nationalism. Needless to say, this was unfair as Skoropadskyi was never lacking in Ukrainian patriotism, however, he realized that Ukraine would be vulnerable alone and welcomed the cooperation of White Russian monarchists and pan-Slavic nationalists as well as the support of the Central Powers they had earlier opposed but all in order to save Ukraine from the revolutionary crisis. Despite his critics, Skoropadskyi responded in the best possible way; by delivering results. Order was restored across the Ukraine, government services began to function again, a peace was negotiated with Bolshevik Russia and diplomatic ties were established with numerous other countries which recognized the independence of the State of Ukraine. These were all things that none of the previous revolutionary governments claiming power had ever been able to achieve. He worked feverishly to build up the foundations of an independent Ukraine with infrastructure improvements and new educational institutions. Unfortunately, the time and breathing space needed to accomplish this was attained in large part due to the support of Germany and Austria-Hungary who, as 1918 wore on, were clearly losing the war. 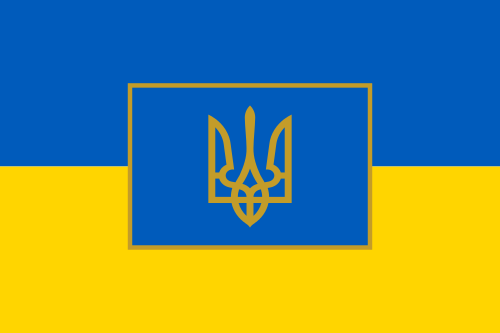 Austria-Hungary was first to come apart and eventually Germany began to collapse as well. The revolutionaries saw their chance and began to move against the Hetman. The Russian Bolsheviks too were watching closely, letting the chaos do the hard work for them, after which they could sweep in and reclaim Ukraine with minimal effort. It all worked out entirely to the benefit of the communists. In the fall of 1918 Skoropadskyi was overthrown as the Germans pulled out. The Ukrainian People’s Republic was restored but that was a complete farce and was only temporary as the Soviets soon took over the country anyway while Skoropadskyi was forced to go into exile in Germany. This was a terrible blow to the monarchist cause in Ukraine because, although the office of “Hetman” had not originally been a strictly monarchist sort of position, Skoropadskyi had effectively made it as much and had he continued in office, there seems little doubt based on his subsequent behavior that it would have become a hereditary position and it is also true that he worked closely alongside Ukrainian and White Russian monarchists during his time in power.

While in exile, Skoropadskyi continued to work with fellow Ukrainian and Russian exiles toward the ultimate goal of seeing the Soviet usurper regime destroyed. He supported both Ukrainian independence as well as the restoration of the Russian Empire under the House of Romanov with Ukraine being a sovereign state within the framework of a broader Russian Empire, a goal not very different from that of the Russian Imperial Family today. He worked alongside various monarchists, nationalists and others of the exile community as well as maintaining contacts with various friendly factions in Germany. However, he refused to ever have anything to do with the Nazi Party which, of course, meant that this efforts would be suppressed once Hitler came to power. Still, he kept up his efforts as best he could, never relenting in his determination to see both the Ukrainian and Russian peoples freed from Soviet tyranny. In 1945, while fleeing before the advancing Red Army, he was wounded in an Allied bombing raid and died in Bavaria on April 26, 1945 at the age of 71. He was buried with the rites of the Ukrainian Orthodox Church in Oberstdorf and was succeeded by his son, Danylo Skoropadskyi, as leader of the Ukrainian monarchist group called the United Hetman Association. He lived in exile in Britain until he died in 1957, presumably poisoned by agents of the KGB. However, his other children have continued to carry the torch for a Ukrainian monarchy to the present day.
Posted by MadMonarchist at 12:07 AM