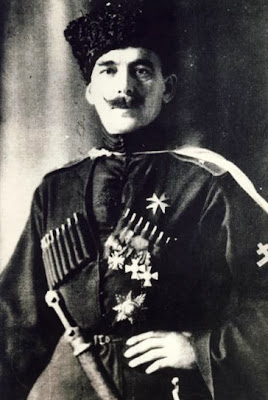 The period of the Russian Civil War was a troubled and chaotic time. In the Bolsheviks, the White Russians faced a fanatical enemy that was out to destroy absolutely everything they believed in, all that Imperial Russia had stood for, not just in politics but in spirit as well. Given that, it is not surprising that many were driven to extreme measures or took positions that seem bizarre in retrospect. Unfortunately, many people ignore the context and as a result most participants have come to be seen as controversial figures. One such figure was General Pavel Rafalovich Bermondt-Avalov. He was born Pavel Rafalovich Bermondt on March 4, 1877 in Tbilisi, today the capital of Georgia but at the time, of course, part of the Russian Empire. He added the name Avalov to his own after he was adopted by the Georgian prince Mikhail Avalishvili (Avalov). From fairly early in life he seemed to have two great interests: music and the military. Given that, it is not surprising that he combined the two, being given a musical education before joining the Imperial Russian Army in the capacity of a musical conductor with the Transbaikal Cossacks in 1901. He rejoined the regiment as a volunteer in 1904, gained the rank of ensign and was baptized into the Russian Orthodox Church all in the same year as serving in the war against Japan. 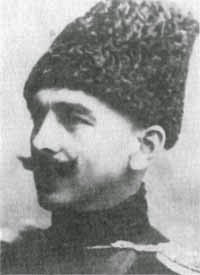 In 1906 he transferred to the Ussuri Cossacks (which would always be considered his “home”) and in 1909 transferred again to the First Lancer regiment. By 1914, when World War I began, Bermondt-Avalov was a decorated veteran and had earned promotion to captain. He did so while serving as the adjutant to the commander of the II Caucasian Army Corps. During his years of service in the Great War he was wounded seven times and earned numerous more decorations including the St George Cross and the Order of St Anne, fourth class, for bravery. He was also, it should go without saying, a loyal and dedicated servant of his Emperor and this was displayed immediately at the time of the Revolution of 1917. Bermondt-Avalov was elected commander of a lancer regiment in St Petersburg and, as such, was officially given the rank of colonel by the Provisional Government. However, whereas many had adopted a cautious “wait and see” attitude, Bermondt-Avalov did not and immediately began planning a monarchist coup against the Provisional Government. However, nothing came of it and eventually he retired to Zhitomir, thoroughly opposed to all regimes that were not that of the Tsar, regarding them all as illegitimate; which they certainly were.

The following year, in 1918, he was made recruiting officer for the southern army in Kiev, in the Ukraine. While there he fought to defend Kiev from the revolutionary forces of the Directorate of Ukraine which had formed in opposition of the Ukrainian State formed by the anti-Bolshevik Hetman Pavlo Skoropadskyi. The Directory was successful as German and Austrian forces were being withdrawn and Bermondt-Avalov was taken prisoner. However, he managed to get himself handed over to the Germans and while in a POW camp began to rally his fellow prisoners to join with the forces of Imperial Germany to combat the spreading menace of the Bolsheviks and restore the Russian Empire. It was also in 1918 that he received his promotion to major general. One of the things that made Bermondt-Avalov stand out was his outspokenly monarchist position. Many of the White Russian commanders, in an effort to form the most broad coalition possible, preferred to remain silent or ambiguous about what exactly they were fighting for; the old Russian Empire, a constitutional monarchy, something like the Provisional Government, but for Bermondt-Avalov there was no ambiguity. His forces were fighting for the restoration of the monarchy, absolutely and unequivocally. 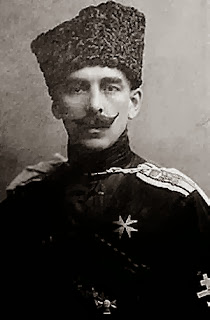 Bermondt-Avalov and his recruits were moved to the Baltic as part of the German-backed West Russian Volunteer Army which also included a remnant of German troops led by the monarchist General Rudiger von der Goltz who was determined to keep the area, particularly Latvia, out of Bolshevik hands. This was 1919 and the Germans, the remaining hardcore at least, were desperate to hold on to their influence in the Baltic and while their aims were not identical to those of the White Russian forces, they could both cooperate in fighting their common Bolshevik enemy. Latvia declared independence during this time, for example, which Bermondt-Avalov did not recognize as his aim was for Latvia to be part of the restored Russian Empire as before, though he did agree that it should have autonomy. The basic situation was that the German and White Russian factions were trying to use each other for their own purposes but, momentarily at least, it worked to the benefit of both. However, problems arose over financial funding for keeping these forces, usually around 50,000 men, equipped and in the field. The Allies had been willing to look the other way as far as the Germans were concerned so long as they were fighting the Bolsheviks but they were naturally not prepared to help them and as the German Empire collapsed so too did any support from Germany.

In spite of these problems, for a time the West Russian army was successful. Bermondt-Avalov and his men captured Zemgale, most of Courland, Samogitia and marched in triumph in Riga. However, the plucky little Latvians wanted their own independent country and fought fiercely against them. Eventually they were joined by like-minded governments in Estonia and Lithuania and these combined Baltic forces eventually were able to overpower the West Russian Volunteers. As their support dried up in Germany and the Baltic states joined forces to oppose them, the West Russian army was forced to fall back and retreat to German territory by the end of the year. General Bermondt-Avalov moved to western Europe, settling in Germany in 1921 and by 1925 published a memoir in Hamburg called ‘In the Fight Against Bolshevism’. 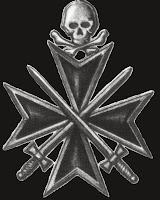 He tried to remain active in Russian-exile politics, taking a hint from the political factions rising in popularity at that time in an effort to launch a far-right counterrevolution in Russia. At times he made alliances with German right-wing groups (many of them with monarchist sympathies) such as “Steel Helmet” to fight the communists. Eventually, however, his efforts were suppressed by the German government. In doing so he came to have connections with some less than savory characters such as Heinrich-Ludwig Link. When Link spoke disparagingly of Adolf Hitler it got Avalov into trouble as well and in 1939 he was arrested by the Gestapo. After spending a year and a half in prison he was released thanks to a personal request from Benito Mussolini and deported to the Kingdom of Italy. From there he moved to Belgrade and after the 1941 coup said “farewell” to Europe and moved to the United States. He died in New York City on December 27, 1974 at the ripe old age of 97 and was buried at a local Russian Orthodox monastery.
Posted by MadMonarchist at 12:13 AM