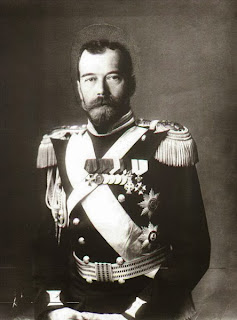 Emperor Alexander II: With Alexander II we have a Tsar who, I think, meant well, had the best of intentions but made rather a mess of things. I also have a problem with his private life in which, despite having a “love match” with his marriage to Princess Marie of Hesse-Darmstadt he went on to have numerous affairs with various women of the Russian nobility. He ended the Crimean War, and it ended badly, but there was really no other option there. Alex II then set out on the path that would lead to him being known as the “Tsar Liberator”. He dismissed conservative officials, freed political prisoners and in 1861 emancipated the serfs. While noble, this had rather disastrous consequences, causing the government to spend an exorbitant amount of money compensating the landowners and still leaving most former serfs penniless and without a means of support. To deal with this, elected regional councils were set up because the central government was hopelessly overburdened and, again, while it surely seemed like a good idea at the time, these councils became breeding grounds for radical liberals. Well intentioned efforts to grant autonomy to Poland only spurred greater demands for total independence and rebellions broke out that spread to Lithuania, Belorussia and the Ukraine. He started to then move back to the right, tried to make a deal with France that went nowhere but did expand in Asia, earning the suspicion of many and it was partly to balance this out that he sold Alaska on the cheap to the United States. His efforts to allow greater freedom only encouraged revolutionaries to demand more, the other powers reduced the extent of his victory over the Turks in the Balkans and in 1881 he was assassinated while trying to aid his wounded driver. In many ways, his death summed up his reign; suffering death for trying to do something benevolent.

Emperor Alexander III: After the regicide of Alexander II, Tsar Alexander III seemed to learn the lesson well, in other words, ‘no more mister nice guy’. To me, Alexander III has always seemed the quintessential Romanov Tsar. In many ways, he personified Russia at its best. He was a huge, incredibly strong man who was stern and devoted to the autocracy in government yet also a warm and even playful family man, faithful to his wife and devoted to his children. He further pushed the campaign of “Russification” yet his reign was not the totally repressive, stagnant era many portray it as. He made honest efforts to reform the economy, enacted the first child labor laws, expanded railroad construction and worked to protect Russian industry which was still finding its footing. When famine broke out he encouraged private charities to help rather than simply expanding the government to handle everything. The only thing I can really fault Alexander III over was his foreign policy and even then, what happened was not his responsibility alone. The “Three Emperors’ Alliance” with Germany and Austria was broken off and the Russian Empire, the most traditional, absolute monarchy in the neighborhood allied with the French Republic. Still, at home he had strengthened the monarchy, kept a peace that allowed Russia to develop and it speaks to his character that his decline into ill health and finally death was brought on by overexertion in saving his family in a train wreck. Russia had lost a truly great man.

Emperor Nicholas II: Another one of my favorites, Tsar Nicholas II can be a difficult figure to summarize because he was such a great man, not just a good one but a great one, who also made or at least presided over some major mistakes. There are few other examples in the history of the world I could point to of a monarch who better understood his place under God, the awesomeness of the responsibility on his shoulders and a total commitment to his duty out of a sincere religious devotion than that of Nicholas II. There was never a more devoted husband and father and never a more sincere Christian monarch. Yet, he did make some pretty big mistakes, the first major one being the war with Japan. Even if, in the end, he had defeated the Japanese and made Korea a Russian colony, it would not have been worth the damage done at home which brought about the 1905 Revolution. Likewise, intervening in 1914 turned a Balkan war into a world war and yet, even though that may have been the most disastrous mistake he ever made, it was done with the noble motivation of defending a weaker Slavic power that had already agreed to most of the Austrian demands from a stronger neighbor. As far as his rule of Russia, mistakes in that direction have, I think, been grossly exaggerated. He could have been firmer, sure, but he did appoint some good men to office only to have them assassinated. And, in spite of all the plain bad luck, Russian industry expanded as never before under his reign, civil liberties existed that had never existed before and even in the midst of World War I there were signs that Russia was on the verge of a come-back. His reign was not the series of disasters most portray it as, it is simply hard for anyone, no matter how good, to prosper as a ruler when you are opposed by people who want to destroy the entire country and its very foundations. All too often Nicholas II is portrayed as someone unwilling to compromise with political opposition or hear a differing points of view -it was nothing like that. His enemies did not just have different ideas on how to solve national problems that were not being heard, they wanted to murder Russia itself. You cannot reason with that. Nicholas II was not perfect in every way but he was a great man and that should be enough. Russia, under Nicholas II, did not need a better emperor but in many cases needed better people.
Posted by MadMonarchist at 12:07 AM