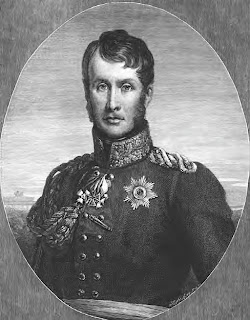 King Friedrich Wilhelm II: Frederick the Great had considerable misgivings about his successor and, indeed, FW2 immediately set about undoing much of what “Old Fritz” had done before him. He repealed taxes, cut duties to encourage commerce and free trade and ended state monopolies -all good things for those inclined toward capitalism. He cut back on the previous policy of religious tolerance, even setting up a Protestant version of the Inquisition. Most damaging though was his relegating of military responsibility to a committee -never a good idea and the quality of the once famous Prussian army declined considerably. He can be applauded for coming to the defense of the Orange party in The Netherlands and he allied with Austria to declare war on revolutionary France. However, he was easily distracted and his military policies meant that no great victories were to follow. Worst of all, this resulted in the disgraceful act of a peace treaty with the vile republicans which his brother monarchs rightly condemned. He did gain more territory for Prussia with the third partition of Poland but it was little compared to the immense reverses Prussia was to suffer in the years ahead. FW2 was not a bad man, he was an accomplished cellist, devoutly religious and thoughtful but, on the whole, he was limited in his thinking and not a very successful monarch.

King Friedrich Wilhelm III: If there was a great ‘turnaround’ story in Prussian history it was the reign of FW3. A serious and well-meaning man, he started on the right foot by cutting back royal expenses which had gotten a little out of hand under FW2. He set a new, higher moral tone for the court in Berlin and had the good sense to marry an attractive, courageous and all around awesome wife in Queen Louise of Mecklenburg-Strelitz. It was the queen who persuaded FW3 to abandon neutrality and join the forces allied against France. The result was a costly defeat at the hands of Napoleon which is often unjustly attributed to FW3 being too fatalistic and indecisive. I say he was just calm in a crisis and, in any event, it snapped Prussia out of its funk. The army was reformed to be super-tough fighting force it used to be and the population was rallied together in a patriotic fervor the likes of which had never been seen before. If FW3 is to be blamed for the previous disasters he must also be credited with the great victories that followed. He ended up being a successful monarch in every way, enlarging Prussian territory, defeating her enemies and securing the succession. The country was rebuilt and soon again joined the ranks of the major European powers. Many view him as a lackluster monarch but, to my mind, he was one of the good ones who made the right call when it mattered.

King Friedrich Wilhelm IV: Despite some drawbacks, FW4 was my kind of monarch; a reactionary one. Anyone who was such a fan of the Middle Ages also cannot be all that bad in my book. He was a great builder and left behind many magnificent buildings and when the pan-German movement began to take off he was careful to not be dismissive but also to work with the nobility and his brother monarchs rather than putting faith in popular assemblies. During the Revolutions of 1848 he was offered the German crown by the Frankfurt Assembly but, famously, refused to accept “a crown from the gutter”. He favored German unity but wanted to see it accomplished as a union of monarchs under the House of Hapsburg as in the days of the old Holy Roman Empire of the German Nation. It was only when Austria stood opposed to German unification that he accepted Prussian leadership in the movement, resulting in the German Confederation which was still under the presidency of the Hapsburgs. He gave Prussia a constitution but with a government dominated by the nobility with representation in the lower house based on taxation. It was really a pretty fair set-up. The more you paid in taxes to the state, the more powerful your voice was when it came to making state policy.
Posted by MadMonarchist at 12:12 AM