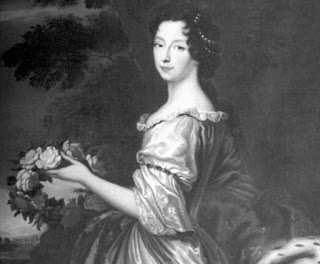 The first Queen consort of the Savoy reign over Piedmont-Sardinia was Anne Marie d’Orleans, a woman of impeccable pedigree whose bloodlines brought some interesting history and potential into the House of Savoy. She was born on August 27, 1669 at Chateau de Saint-Cloud in France, the daughter of Duke Philippe I of Orleans (younger brother the great King Louis XIV) and his wife the controversial Princess Henrietta of England (daughter of the martyred King Charles I). Less than a year after Princess Anne Marie was born her mother died (last rites being administered by the great Bishop Bossuet) but a year later the Duke of Orleans married Princess Palatine Elizabeth Charlotte who proved to be a good stepmother and Princess Anne Marie was very close to her. Even as a young girl Princess Anne Marie stood out for her kind and friendly nature as well as her virtue and firm principles. Of course, in those days, royal girls had to grow up fast and marriage tended to come quickly. Anne Marie was only fourteen-years-old when King Louis XIV decided to help maintain French influence in northern Italy by marrying his niece to Duke Victor Amadeus II of Savoy. A marriage contract was negotiated and signed by the two governments and a marriage ceremony by proxy was performed at Versailles on April 10, 1684 with Louis-Auguste de Bourbon, duc du Maine standing in for Victor Amadeus II. 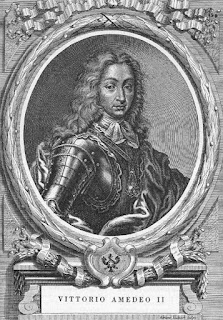 In one of those odd twists that history often presents, this marriage was arranged in part by a countess who had been the mistress of Victor Amadeus II for about four years and who had given him two illegitimate children. Whether Anne Marie knew about this or cared she had little say in the matter with such royal marriages being a matter of state policy rather than personal preference. The Princess said her goodbyes, her father escorted her to the frontier and she finally met her husband at Chambery on May 6, 1684. The two were married in person by the Archbishop of Grenoble and later made their grand entrance into the Savoy citadel of Turin. She seemed a lovely but delicate girl, her fragility no doubt emphasized when next to a veteran soldier like Victor Amadeus II. Nonetheless, despite having a couple of years pass before she did her part for the succession and became pregnant, her first childbirth was a traumatic ordeal. She was only sixteen-years-old when she gave birth to her first child, Princess Maria Adelaide (later Dauphine of France) but it was so difficult that for a time she seemed close to death and even received the last rites before finally recovering from the ordeal. Ever dutiful though, she would go on to have five more children, a future queen and king among them. She was a good mother and also a devoted wife, patiently nursing Victor Amadeus II when he came down with smallpox, attending to every detail of his care.

In 1688 Anne Marie gave birth to another daughter, Maria Luisa of Savoy, who was eventually married to the Duke of Anjou, the new King Philip V of Spain. This set off the War of the Spanish Succession in which the Duke of Savoy took the side of the Austrians against France and Spain. It must have been a painful ordeal for Anne Marie with relatives on both sides of the conflict. She was herself half French and half British with France on one side and Britain on the other. Her husband was on the side of Austria and Britain while her daughter and half-siblings were on the side of Spain and France. The war began in 1701 and in 1706 Anne Marie had to take her young sons and flee Turin as it was besieged by French and Spanish forces led by her half-brother the Duke of Orleans and her son-in-law King Philip V of Spain while her husband stayed on to defend the city. It seemed hopeless but Victor Amadeus II was able to hold out long enough for the Austrians (under Prince Eugene of Savoy) and the Prussians to come to the rescue and win the battle. When it was all over in 1713 the Treaty of Utrecht rewarded Victor Amadeus II with a royal crown; the Kingdom of Sicily. However, he was later forced to trade that for the Kingdom of Sardinia. This was seen as a lesser prize, nonetheless, it brought recognized royal status to the House of Savoy and made Anne Marie Queen consort of Sardinia. 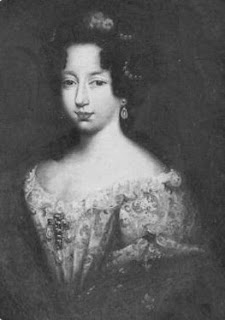 Yet, this was not the only royal connection to come along for Queen Anne Marie. The following year she became the heiress presumptive of the Jacobite legacy of the British Isles through the Stuart blood of her mother. With the death of Queen Anne of Great Britain in that year, she was the next closest relative of the “Old Chevalier” Prince James Francis Edward Stuart (“King James VIII & III to Jacobites) until the birth of his son Prince Charles Edward Stuart in 1720. The Jacobite legacy would be carried on by Prince Charles (and come closest to effecting an actual Stuart restoration) and his brother the Cardinal Duke of York in turn. After that, however, the legacy would pass to the House of Savoy because of the marriage of Queen Anne Marie and King Victor Amadeus II. No one was happier than the Duchess of Orleans, the stepmother of Queen Anne Marie, that she had achieved such royal status. Despite their having been on opposite side of the Spanish war, the Duchess wrote that, “one thing I shall enjoy is to see our Duchess of Savoy become a queen, because I love her as though she were my own child” which is a testament to the good nature of both royal ladies.

Queen Anne Marie sadly died at her villa on August 26, 1728 of heart failure, one day before turning 59. She had already outlived all but two of her six children and was buried at the Basilica of Superga in Turin next to all but the two who had been married off to France and Spain.
Posted by MadMonarchist at 12:35 AM