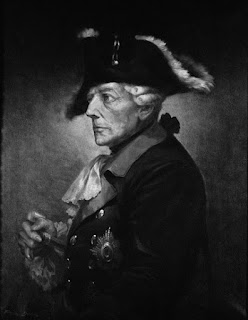 The House of Hohenzollern

King Friedrich I: If ambition in itself is to be admired, Friedrich I is certainly an admirable man and, tempting as it is, I cannot have too high an opinion of him overall. Born in East Prussia, he succeeded his father as the Elector of Brandenburg before, in 1701, crowning himself “King in Prussia” with the grumbling consent of the Holy Roman Emperor (the ruler of Austria in other words) since he had made it the price for Prussian support against France in the War of the Spanish Succession. His reign was greatly concerned with building up the independent power of Prussia apart from the rapidly diminishing power of the Emperor in Austria. He funded the arts and promoted education to show that Prussia was equal to the other major powers of Europe. However, he also presided over a government with a great deal of corruption and it was a heavily indebted state he left to his son. Known as a likeable fellow but not a terribly successful fellow, he seemed constantly to be reaching for a greatness that his abilities never allowed him to achieve. Still, his administrative work cannot be overlooked and he helped build the framework for when the Kingdom of Prussia was able to rise to the status of a major European power.

King Friedrich Wilhelm I: If Friedrich I laid the foundations for Prussian greatness on the civil side of things, Friedrich Wilhelm I certainly did as much or even more on the military front. Known as the “Soldier King” the Prussian army was his pride and joy -perhaps excessively so. Yet, there was more to him than that. He was a very meticulous, “hands-on” monarch who worked throughout his reign to centralize power, improve the infrastructure, expand farming and, of course, to strengthen his beloved army. He loved his soldiers so much it often seem he did not want to spoil them by actually risking them in battle. He is remembered for his love of tall soldiers in particular, hence the famous ‘Potsdam Giants’. An autocrat who firmly believed in royal absolutism, he did not get along well with his more “enlightened” son but he put Prussia back on a sound financial footing, gave it a highly trained and formidable army and laid the foundation for greater success in the future. A rather cautious man, his reign was essential in building on what his father had left behind as well as improving the areas he had neglected. For a small state like Prussia, she had to have an army that could punch above its weight to ever have a chance of becoming a major European power. Friedrich Wilhelm I gave Prussia that army.

King Friedrich II: It is not without reason that the second Friedrich is known to history as “Frederick the Great”. He took the magnificent army his father had built and used it to best advantage. When Frederick the Great came to the throne, Prussia came down with an acute case of “awesome”. He was a latter-day “renaissance man” who knew something about everything, from art to architecture and music to agriculture. His biggest drawback, for me at least, was his place as one of the “enlightened despots” of the time, being both liberal and autocratic. Religiously tolerant, he welcomed Protestant refugees while also harboring Jesuit priests after that order was suppressed and he increased government revenues by (I love this) indirect rather than direct taxation. However, he will probably always be best remembered as a warrior-king in the best Prussian tradition. He learned by both training and experience but once he mastered the art of war he proved to be a military genius the likes of which the world has seldom seen. He conquered Silesia in the War of Austrian Succession and through skill and a great deal of determination (as well as some plain good luck) he emerged victorious from the Seven Years War despite having almost every major power on the continent arrayed against him. Even his most devoted enemies had to admit his genius and long after his death his name was spoken with reverence and awe by both friends and foes of Prussia. Most importantly, by his victories, he made Prussia a major power and was the first to be titled “King of Prussia” rather than merely the “King in Prussia”.
Posted by MadMonarchist at 12:19 AM