I Get Fan Mail! 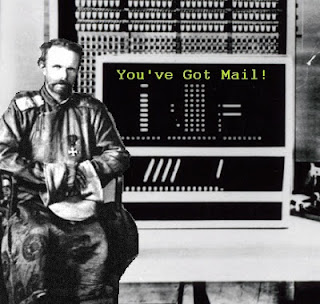 As promised, here is another selection from my collection of fan mail. It is gratifying to know that I have the ability to so enflame the emotions of people. I have noticed that the volume of fan mail has been lower recently but the level of vitriol has been higher than it has been in years -possibly ever as you will soon see. For the most part, I look at these and wonder why anyone would so waste their time. I wonder if these are welfare bums or trust fund babies who have so much free time on their hands that they can troll around the internet, looking for websites that are about something they totally despise, find one, never read it but still take the time to figure out the email address or go through the hoops to leave a comment just to let out an insulting tirade. I wish I had that kind of free time though I could certainly find more pleasurable ways to spend it. Anyway, although I cannot understand why, people seem to enjoy reading my fan mail based on the number of hits past posts of this sort have received so, here is another selection of e-mails, messages and (attempted) comments from some of my most adoring fans. As usual there will be the message in as near the original form as I can make it, followed by my reaction. Enjoy.

You sound like just an apologist for the racism of Rainier III in denying the throne to his beautiful grandson. Not the mad monarchist, the mad apologist. You are probably some bureaucrat paid by the palace to put out this crap.
Oh probably so yes, but my checks must be getting lost in the mail. It seems odd though that Rainier III would be regarded as a racist for not allowing the half-Black illegitimate son of Albert II to succeed to the throne. The rules of succession are what they are and make no mention of race as a determining factor at all but even more odd considering that the mother of little Alexandre did not even come forward with him until Rainier III departed this life. Not that the facts ever mattered to these sort of people.

MadMonarchist - Why don't you go f**k yourself - and this is not "pending approval"
This was an attempted comment obviously and from yet another juvenile republican who recently discovered the “f word”.

wow,i can't believe that such thoughts as those u put forth still simmer in the hearts of men. while it is very romantic to say the least. the reality of monarchy is just as much populated by psychosis as any other form of human social organization(and from my own perspective even more so). it may be a stable form of slavery. but it makes slaves of the masses of human beings all the same.﻿ except its out in the open and self evident. which is its only virtue. but i respect ur honesty about ur desires. and ur right to have them.a freedom only allowed in the very republics u deny.
And I can’t believe there are republicans who would dare use the slavery analogy when it was the very monarchist United Kingdom that led the movement to abolish slavery in the western world. I would return the respect for the honesty of this writer if he/she displayed any, the last line there being an obvious lie. In most monarchies the public has the option to become a republic whereas republics give their people NO option to become a monarchy.

Wow. You're an idiot. Maximilian and Agustin were all for ripping off the Mexican people to live in luxury themselves. It's not "politically correct" to point that out--it's reality.
Maybe in your deluded little head. I mean, “Wow. You’re an idiot.” Both Maximilian and Agustin died with not a penny to their name whereas it was the republican leaders like Santa Anna or later Porfirio Diaz who sailed away to live in luxurious exile on the funds they looted from the Mexican treasury before running away -unlike the two Mexican emperors who bravely chose to die for their principles.

all these people descendant deserve to die, bunch off criminals land robbers f**k them all...i wish they had the same faith as Kaddafi...f**k you stupid f**k who like them
People descendant or people’s descendants? Same faith or same fate? Yeah, nothing “stupid” about this guy. That sentiment just screams brilliance doesn’t it?

You stupid ignorant. GO to hell with you g*dd***d king…
Okay, since you brought up stupidity; “stupid ignorant” is rather redundant, you misspelled “damn” and as this was attached to a post on King Norodom Sihanouk, as he was a Buddhist and I am a Christian we will probably not be going to hell together -at least not the same one. Sorry.

You sad soul…so desperate to bow before the “blue bloods”.
You’re right, it is sad, republics where people bow to red blooded American dynasties like the Kennedy, Bush and Clinton families are oh-so superior.

F**k you 51th state , f**k your whore queen, f**k england , stupid pro.british
Again, the intelligence, reason and eloquence of the republican mind never ceases to amaze me. The more I read, the more I am convinced of the error of my ways. Yes, democracy is the answer, where people like this choose who will have sole control over the nuclear arsenals of the world.

This is a rather longer one, so I have had to break it up to respond appropriately:
WHAT THE F**K!!!!!!!!!!!!!!! MONARCHY?!?!! How can you agree with monarchist views, that falls off the ‘right’-side spectrum. The original old and new testaments were not written in favor of monarchy, just remember Jesus’ original message: “Love thy neighbor”.
I may be mad but I have a hard time accepting the Biblical opinion of someone who starts a letter by dropping the “f” bomb. And “Love thy neighbor” has nothing to do with government. It has to do with, well, your neighbors. Both Testaments do favor monarchy, loyalty to monarchs being commanded in no uncertain terms on numerous occasions.

Tyrannical circumstances like monarchy does not fall under the definition of prophetic Christianity, unless those holding power are fair to their people. That is not a common of power, a form of government more on the ‘liberal’ side of the spectrum.
“That is not a common of power”? Do you speak English? And Christianity has nothing to do with fairness. It is, in fact, quite an unfair religion -and I thank God for that. Were it anything close to fair none of us would have any chance at all of escaping damnation.

True Marxist Socialism is possibly the best way to run a system of government. Russia, Cuba, Germany, North Korea nor any of those countries were ever truly socialistic. Look it up, the way the powerful ran those countries was not even close to true socialism, they just called it socialism to fool its people.
YES! I LOVE this argument! I haven’t heard this since my university days. Yes, they all got it wrong. Absolutely everyone in the whole of North Korea, East Germany, Cuba and the Soviet Union ALL got it wrong, even after devoting their entire lives in many cases to studying socialism, they ALL got it wrong but YOU, mister internet troll are so smart that you figured out that system that baffled hundreds of millions in countries all over the world. My goodness, the “best way to run a system of government” must be really, really complicated and hard to understand!

Reformed Socialism is actually quite possibly the worlds very best system there is. In true ‘conservative socialism’ people thrive. Medicine and all health expenses are publicly financed and paid for, and wages are high for everyone because the market doesn’t run off of a ‘Plutocraticly Warped Consumerist Market’.
Why don’t you just say that wages are high because of unicorn flatulence and healthcare is financed by Santa Claus? It makes just as much sense as what you actually said.

Instead, almost all the people in a country are working because there are a ton of publicly expensed jobs; and those people are being paid very well-off in order to pay for the cost of living and public expense. We can choose conservative socialism so everyone has a say and we are following the true definition of a democracy, or we can; for some strange reason, switch to monarcy; where no one has a say; and also very likely will corrupted, nazist dictators will hold power…not god.
Again, do you speak English? Did it take all of your mental power to discover the “true” meaning of socialism so that there was no room left to be able to string together a coherent sentence? I would try to respond to that but, seriously, I feel I would need someone to translate it for me first. What I can say is that this is just one more letter from one more person which makes me ever more terrified of democracy and republicanism. Just read the nonsense above and reflect: the fate of your country is in the hands of people just like this. The horror. The horror.

Email ThisBlogThis!Share to TwitterShare to FacebookShare to Pinterest
Labels: mail