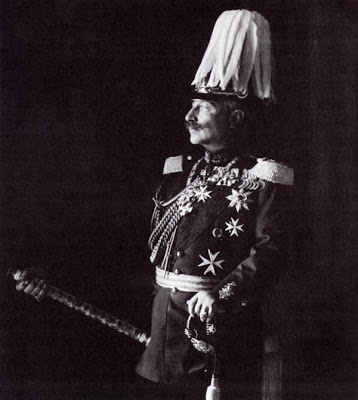 Kaiser Wilhelm I: Another solid conservative monarch, Wilhelm I was pretty good, at least when he wasn’t crying -which he did a lot. He wasn’t cowardly, he had proven himself to be very courageous fighting against Napoleon, but he was rather on the emotional side. He took a more “hands-off” attitude toward government than his brother FW4 but was always careful to guard the powers and prestige of the monarchy. He made it very clear that ministers were responsible to him rather than the parliament. Of course, in politics, the field was dominated by Otto von Bismarck who at least was a staunch monarchist. Bismarck was more driven that Wilhelm I when it came to German unification but Bismarck would usually get his way by throwing a fit until the King broke down in tears and gave in to him. However, though calling him “Wilhelm the Great” seems a stretch as he certainly had very little in common with “Frederick the Great”, Wilhelm I presided over an unbroken string of great Prussian victories. Denmark was defeated, then Austria (which Wilhelm I wanted to pursue all the way to Vienna but was dissuaded by Bismarck) and finally the decisive victory over France in 1870. At Versailles the German princes united and hailed Wilhelm I as “German Emperor” which Wilhelm I accepted (after some persuasion) though he insisted on “German Emperor” rather than “Emperor of Germany”. He was not an ideal husband but he was frugal, a steady monarch and an inveterate enemy of the socialists. All in all, a good, solid monarch.

Kaiser Friedrich III: I have a bit of a hard time with Friedrich III because he was such a good man yet one who often seemed inclined towards political movements not to my taste at all. His father Wilhelm I worried a great deal about his liberal tendencies and the influence his wife (Princess Royal Victoria) had on him. Like her, he was inclined toward limited, constitutional monarchy, watched over rather than ruled by an equal husband and wife team. Yet, he was as devoted to the army as any Prussian king and was quite the German nationalist, certainly much more than his predecessors. He wanted a united Germany, without a powerful Reichskanzler like Bismarck, with ministers responsible to parliament and a parliament that was more democratic. It would certainly be far removed from the Germany created by Moltke, Roon and Bismarck. Would it have endured though? He lived to reign only 99 days and his vision for the future died with him but it has always tantalized historians as to whether his more liberal, more middle class, more democratic Germany would have survived a calamity like the First World War. I cannot fault Friedrich III for his idealism but, I tend to doubt it. It would have meant putting trust in those who, in the course of German history, proved themselves untrustworthy and German success would have still engendered the envy of Great Britain, France would have still been seeking revenge for 1870 and so on. A good man but rather too idealistic for me.

Kaiser Wilhelm II: Finally we come to my old friend, “Kaiser Bill”, one of the first monarchs I ever really studied in depth. In fairness that should be kept in mind when I say that a great deal of what has been written about him is, in my view, utter nonsense. He certainly made his share of mistakes and could be too free with his opinions, however, he was not a bad man, he was not a warmonger (though he tried to sound like one at times) and while he could be aggravating he was certainly no villain. Like his grandfather rather than his father, he believed in absolute monarchy, detested parliaments but, like his father, was an upstanding family man. The devout Christian faith of Wilhelm II is something very seldom remembered. His bombast was intended to distract from what was really an inferiority complex and it has often been said that he talked like an autocrat but never ruled as one. That is misleading though as, despite the big talk, Wilhelm II did not like being flattered or lied to and knew what his own limitations were. He was a very monarchist monarch who recognized the danger of republicanism and was astounded that brother monarchs would make common cause with them. He may have been a bit on the racist side when it came to Asians but he was certainly no anti-Semite, despite what some have tried to say by blowing the odd remark out of proportion. He was not responsible for the First World War, did his best to see it fought honorably, warned of the danger in making use of Lenin in Russia, refused to recognize the Weimar Republic and he never trusted Hitler. Not a perfect man, of course, but a good man, a dutiful monarch, a man with a plethora of interests, forward thinking but also reverent of past traditions and a man of considerably more common sense than he is often given credit for.
Posted by MadMonarchist at 12:05 AM