Struggle for Monarchy on the U.S.-Mexican Border 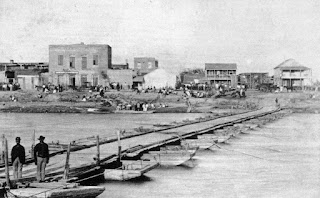 Throughout most of the 1860’s war was raging on both sides of the U.S.-Mexican border. North of the Rio Grande American fought American and south of the Rio Grande Mexican fought Mexican with outside assistance for each. It was inevitable that the two would overlap but few today are aware of the struggle between republicans and monarchists that was going on right in the backyard of Texas. At the end of the American Civil War roughly eight to ten thousand Confederates fled to Mexico (then the [second] Mexican Empire) rather than live under Union rule. The Mexicans called them los Confederados and some of the more notable ones included Texas governors Edward Clark and Pendleton Murrah as well as generals such as Edmund Kirby Smith, Sterling Price, John B. Magruder and Joseph O. Shelby. For some, the war in Mexico was quick to greet them such as when Missouri General Mosley Monroe Parsons along with his officers and their families were robbed and then massacred by republican bandits. Others made the trip safely and offered their support to the embattled Emperor Maximilian.

The welcome given to the Confederates in Mexico did not help the already tense relations between the United States and the Empire of Mexico. General Tomas Mejia of the Imperial Mexican Army was wary of the increasing number of U.S. troops being sent to the south Texas border. The U.S. had been openly antagonistic about the French intervention in Mexico and never recognized the government of Emperor Maximilian. The largely African-American force of U.S. soldiers on the border were sympathetic to the fugitive Mexican president, Benito Juarez, with only some of the more devoutly Catholic Irish-American U.S. soldiers speaking favorably of Maximilian because of his greater respect for the Church compared to the notoriously anti-clerical Juarez. In time, both the Mexican imperial and republican armies on the border would come to include former U.S. and Confederate soldiers. The Confederates naturally took the side of Emperor Maximilian for the most part, due to his closeness with Imperial France which had been somewhat friendly toward the Confederacy. Most of the Union soldiers sided with Juarez and the republicans. Some still serving with the U.S. Army were allowed and even encouraged to “desert”, cross the border and join the forces of Benito Juarez. Despite orders from Washington to the contrary, Union officers provided large amounts of supplies, uniforms, guns and ammunition to the Juaristas.

As always, the conflict on the border had a style all its own. On one side was General Mejia with 3,000 imperial troops, including about 300 French and Austrian soldiers. Their army was harassed constantly by the regular and bandit forces of Benito Juarez as well as the bandits of the local border chieftain Juan Cortina who switched allegiances several times. In the summer of 1865 General Mejia embarked on an offensive toward Camargo that cleared out the republican bandits and Juaristas. Consolidation was able to take place and the city of Matamoros was cleaned up and work even got underway by a Belgian company to build an opera house in anticipation of a visit by the Emperor and Empress.

The bandit-chief Cortina continued to be very problematic though. On May 1, 1865 he joined with Juarista General Miguel Negrete for a three-day attack on Matamoros. The Imperial Army of General Mejia defeated them and sent the Juaristas packing but Cortina stayed behind. U.S. forces even allowed the Cortinistas to recruit new men in Brownsville, Texas across the river, to use U.S. Army camps on the Texas side of the border and to buy U.S. guns and ammunition. The French, naturally, protested this blatant violation of American neutrality but the U.S. effectively ignored them. Cortina was even employed in trying to track down the Confederates entering Mexico but with little effectiveness.

Eventually, Cortina drove the imperialistas out of Camargo but he was in turn dealt severe defeats in an attempted raid on an imperial supply train and an imperialista attack on his own encampment. The situation soon degenerated into a no-holds-barred guerilla war. The French and Mexican imperialists decided to fight fire with fire and turned to the flamboyant and vicious Colonel Charles Dupin, leader of the contra-guerillas who struck the republican forces with such ferocity and cruelty that he was nicknamed the “hyena of Tamaulipas” and his men, the “Red Devils”. However, both sides were equally brutal no doubt about it.

The primary goal of the republican forces on the border was to drive the Imperialistas out of Matamoros. Toward this goal, U.S. General Lew Wallace (future author of “Ben-Hur”) and Mexican rebel Jose Maria Jesus Carbajal collected men, money and weapons for an ‘Army of the North’ to attack the city. The effort began in October of 1865 with an attack by Juarista General Mariano Escobedo. General Mejia met the challenge bravely, at one point personally leading a charge with five hundred cavalry to drive out Juaristas who had broken through his defenses. Supporting fire came from the French gunboat “Paisano” on the Rio Grande which shelled the Juaristas from the river. Another French gunboat, the “Antonia”, was actually openly fired upon by U.S. troops on the Texas side of the river. In fact, Escobedo’s republican army included many U.S. soldiers on “leaves of absence” to participate in the battle and help ensure a Juarista victory. Cortina’s men were also involved and harassed the French marines from the safety of U.S. soil. Of course, General Mejia and the local French naval commander in the Gulf of Mexico protested such blatant violations of American neutrality and, of course, it did them no good whatsoever.

The attack on Matamoros went on for sixteen days until an imperial cavalry patrol discovered that the Juaristas had abandoned their lines and retreated on November 9. Total losses for the Juaristas amounted to five hundred dead or wounded and fifty-eight taken prisoner while General Mejia had lost fewer than twelve. Yet, as long as the republicans remained in the area the fight went on with Juarista raiders attacking French and Imperialista detachments. In December, General Escobedo even managed to take Monterrey though it was quickly taken back by only seven hundred imperial cavalry. The town of Bagdad also came under attack, first by American land pirates and again in January of 1866 by forces allied with the scheming U.S. General Lew Wallace. Lt. Colonel J.D. Davis commanding the 118th Colored Troops (the official designation for African-Americans serving in the U.S. Army at the time) at Clarksville, Texas also allowed the invaders to pass and many of his troops even joined the expedition. The raiders overcame the guards at Bagdad on January 5, surprised and captured the guard commander and murdered the imperialist mayor. The town was seized and plundered by the American forces.

With all sides taken by surprise, soldiers of the 2nd U.S. Colored Troops entered Mexico and took possession of Bagdad. Pressure from local merchants and leading citizens of the area forced a U.S. investigation but naturally no American officers were punished for what amounted to an unauthorized (presumably) U.S. invasion of a foreign country with which the U.S. was not at war. The Americans naturally allowed the republicans to take over, but these forces evacuated on the 24th and monarchist rule was restored though it took threats of a French blockade of Brazos de Santiago to see even a fraction of what was looted returned to Mexico. In the end, it was of little consequence because, with the U.S. again in control of the Texas side of the border, the Mexican Imperial forces could not hold out for long. Already the U.S. had applied diplomatic pressure to stop Austria-Hungary sending reinforcements to their volunteers in Mexico and equal pressure was being put on Napoleon III to get the French out before a massive American army invaded to push them out. With republican bandits to their south and unfriendly U.S. forces across the river to the north, supplies soon grew scarce for the imperialistas in Matamoros.

As spring turned to summer in 1866 the tide of war began to turn irreversibly against the forces of Emperor Maximilian on the northern frontier of Mexico. Throughout the summer of 1866 republican forces re-took Chihuahua, Guadalajara, Tampico, Acapulco, Monterrey, Saltillo and even Matamoros as the French pulled out of Mexico and U.S. aid to the republicans, in men and materials, increased. On the border, Matamoros was the key position and Mejia and his imperial forces were in a precarious position. As a change in the wind was felt by all, Mexican units formerly loyal to the Emperor began to waver and the key battle came on June 14, 1866. A large imperialista column, already brought near to ruin by thirst and lack of supplies, was ambushed by a massive republican army at the battle of Santa Gertrudis, known thereafter as the ‘Waterloo of the Mexican Empire’. During the grueling fight the equivalent of two whole battalions of Mexican troops deserted to the Juarista side, leaving their former comrades to their fate. Much of the cavalry abandoned the fight to save themselves while the Austrian contingent decided to go out in a blaze of glory, fixed their bayonets and launched a last, suicidal charge into the republican lines. The most unfortunate were the contra-guerillas who, whether armed or not, wounded or not, were immediately shot by the republicans. Millions of dollars worth of supplies, equipment and war materials were captured and in the aftermath, after learning of the disaster, General Mejia had no choice but to abandon Matamoros and retreat south. It marked the end of the conflict on the border and the beginning of the end for the cause of the noble Emperor Maximilian.