Downfall of the Monarchy of Madagascar 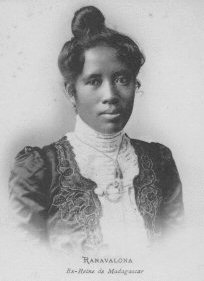 It was on this day in 1897 that the Kingdom of Madagascar officially ceased to exist after the last queen was deposed by the forces of the French Third Republic. It was a sad day for the downcast monarch, Queen Ranavalona III, and for Madagascar as a whole but the French were also not quite the villains they are often portrayed as. In cases like these there does tend to be a habit of exaggerating things. When it came to the great colonial race, France was anxious to expand, not simply for the sake of expansion, but also to block British colonial expansion. Whether Africa or Asia the French thinking was that if they did not take control of an area the British certainly would and then they would be shut out. And, considering how hugely successful the British Empire was, it is not an outrageous mentality to have. One could hardly swing a dead cat anywhere in the world without hitting a British colony. It might just be one little rock(all) in the middle of the ocean, but look away for a second and there would be a Union Jack flying over it.

There is also no denying the fact that the Kingdom of Madagascar was in less than ideal shape. The Queen, and Madagascar had a succession of female monarchs, did not count for much anymore. She devoted her time to playing games, doing needlework and collecting the latest fashions from Paris and was a rather naïve woman. Some time previously Madagascar had officially become a constitutional monarchy and, while many sources speak of this as an achievement in the march of progress, in effect it meant that the monarch was overthrown in all but name. Officially, the Queen was supposed to share power with her Prime Minister (which itself had become an office dominated by one family) but the standard procedure was for the PM to be married to the monarch (imagine the consequences such a policy would have in other monarchies!) and in a country where women were definitely second-class and polygamy was more common than not, in fact if not in name it was the Prime Minister who ruled Madagascar while the Queen kept herself busy with hobbies.

The introduction of constitutional monarchy could almost be seen as the replacement of one royal family by another. For example, Prime Minister Rainiharo obtained that office, as well as that of Commander-in-Chief, by marrying Queen Ranavalona I in 1833. He was succeeded as Prime Minister by his son Rainivoninahitriniony (hope I spelled that right) who was an attempted regicide and coup leader but that did not stop his brother Rainilaiarivony from succeeding him as Prime Minister. He first married his cousin and had 16 children but then also married Queen Rasoherina (the widow of the King his own brother had plotted to kill and who the new PM purged from the list of kings -even making it illegal to speak his name). In due course he married each of the last three Queens of Madagascar; Ranavalona II and Ranavalona III in their turn. He was complicit in a number of coup attempts and was responsible for the new constitution that drastically limited the power of the monarchy and in effect made him king in all but name.

The French, for their part, had no initial desire to bring down the monarchy in Madagascar. Oddly enough, even in republican France, many recognized the value of monarchy in foreign countries and French colonies. Sometimes they were quite beneficial to colonial monarchies and at other times, even when the French were detrimental it was inadvertent. French concern about the British was not unfounded. British influence was growing in Madagascar, particularly through British missionary Bible societies to the extent that the Queen and Prime Minister became Protestant Christians, ordered their court to do the same and “encouraged” the public to be baptized out of patriotic love for the Queen. Alcohol was banned, work on Sunday was banned and a few Catholics were persecuted to show how truly Protestant Madagascar had become. In fact, most continued with their native beliefs with a dash of Christianity thrown into the mix. 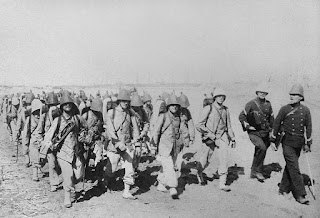 The last King of Madagascar, Radama II (the one the PM’s brother had knocked off) had made some concessions to France that the subsequent native authorities refused to honor, sparking the first unpleasantness between France and Madagascar. France gained a port on the north shore and the promise of 50 million francs in reparations. The treaty also effectively made Madagascar a protectorate but left local affairs to the locals. However, as often happened, the two sides disagreed on what exactly had been agreed to, Madagascar pulled out of the agreement, sought foreign assistance and France sent the troops in once again. That time the royal palace was the target and the future of the monarchy would not be so certain. According to some sources, Queen Ranavalona III was in favor of the French incursion as a way to rid herself of her old and domineering husband (he was more than 30 years older than the poor girl). The local populace did nothing to hinder the French advance and the native military was swept aside with little difficulty. After a few shots at the palace the PM surrendered and the next day the Queen recognized France as the protecting power of Madagascar. Her husband was removed from office and exiled to Algeria (where he actually became quite the Francophile himself) but Queen Ranavalona III was allowed to retain her throne.

In a way, this was a liberating moment for the young monarch. Though, the innocent young woman was a little nervous when the French said she would need a new Prime Minister and she immediately chose French General Jacques Duchesne who had led the recent campaign. The worry arose from her assumption that she would have to marry him and the Queen was relieved when told that such was no longer to be the case. Unfortunately, once it was too late, the native population did begin to rise up against the French presence as well as the Christian missionaries (Catholic or Protestant) and all other foreign influences. Members of the royal court and royal family were implicated in this and, from that point on, many in France began to see the monarchy as being more trouble than it was worth. The rebellion was put down and a hard military man, General Joseph Gallieni (who would go on to considerable fame in World War I) was put in charge of things in Madagascar. Not long after arriving he had the royal properties seized, placed the Queen under house arrest and finally, on February 27, 1897, abolished the monarchy and sent the Queen into exile on Reunion Island, later being moved to Algeria. 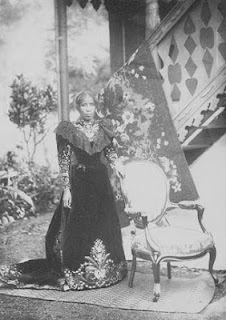 The former Queen visited France several times in the following years where she was a big hit and which she adored. She had become a bit of a Francophile as well, just like her former husband/PM (who actually wrote an open letter to the rebels in Madagascar, saying they should stop their attacks and be grateful to the French). She died on May 23, 1917 up to the last working for the Algerian Red Cross to show her solidarity with France during the Great War. In the absence of the monarchy, less than ideal though it might have been, Madagascar has not prospered. In 1960 the island nation regained its independence from France and in the short span of time since then has already gone through four republics, coups and power struggles remain commonplace and most of the populace lives in poverty. Yet another example of the horrible results of abolishing a perfectly good monarchy.

Posted by MadMonarchist at 12:44 AM